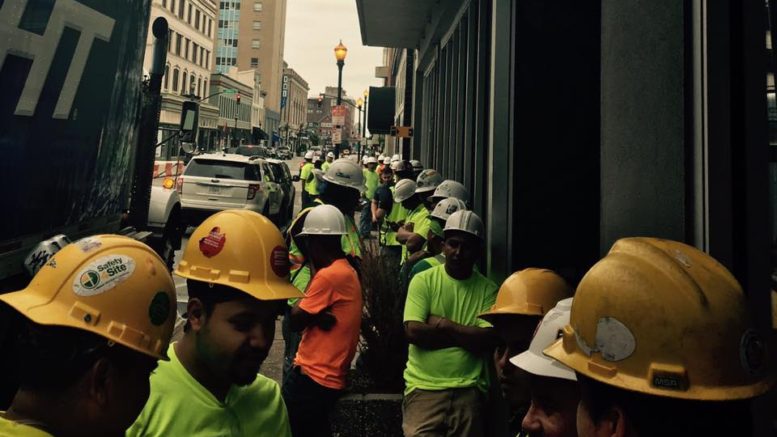 Workers on a wildcat strike in Louisville (Richard Becker)

Greetings from Nashville, Tenn., where Payday has been investigating the death of Latino construction worker Sergio Gutiérrez. Check out our initial post and donate so we can keep covering this crucial story.

While Payday was down in Nashville, a lot of action was happening back in Louisville.

On Monday, more than 100 Latino construction workers walked off the job at the Omni Hotel in protest of being paid less than their white colleagues.

Approximately half of the cost of the $289 million hotel construction project is being paid for through tax initiatives provided by Louisville Metro Government and the Commonwealth of Kentucky. As a result of the government subsidy, workers on the project are being paid prevailing wages according to federal regulations.

While other workers are classified as working on a commercial rate, only the Latino workers, who hang drywall, were being paid residential rates.

“We are the only one underpaid on this job,” Marco Cruz told WDRB. “Everyone else is making like $40-$45 an hour and we’re doing like $20 an hour. So we feel like we were discriminated by our gender, our race, and that’s what we’re demanding just fair salaries.”

The workers returned to the job on Thursday but signaled that they intended to unionize with the Indiana-Kentucky-Ohio Regional Council of Carpenters Local 175.

The strike of Latino construction workers sent a jolt into the labor movement across Kentucky as union activists are in the process of adapting to the “right-to-work” law passed earlier this year.

On Thursday, the Kentucky AFL-CIO and Teamsters Local 89 filed a lawsuit seeking an immediate injunction against the implementation of so-called right-to-work in Kentucky. The lawsuit charges that Kentucky’s right-to-work law violates the state’s constitution since no other organization in the state is required to provide services to those who don’t pay dues to that organization.

“Courts in other states have struck down virtually identical so-called right-to-work statutes because they force unions to provide many costly services to workers for free,” said Irwin Cutler, attorney for the Kentucky State AFL-CIO, in a statement. “No other state law requires any organization to give away its services, but under this law, Kentucky’s labor unions must do so.”

Earlier this month, Tom Perriello became the first major candidate in a Virginia gubernatorial race to call for a repeal of right-to-work. His opponent, Lt. Gov. Ralph Northam so far has refused to embrace a similar pledge, as did previous Democratic Governors, including Tim Kaine and Terry McAuliffe.

On Thursday, Perriello picked up the endorsement of the 10,000-strong Virginia Association of the IBEW, composed of 23 local IBEW unions across the state.

“We’ve done the research, and Tom Perriello’s policies in support of apprenticeships, technical training, and safe workplaces are the best for our members and all of Virginia’s working families,” said Jeff Rowe, President of the Virginia Association of IBEW and Business Manager of IBEW Local 1340 in Newport News. “His commitment to oppose Virginia’s detrimental Right-to-Work law sends a clear message. This law has weakened workers’ rights for 70 years. We are very pleased that someone running for statewide office has finally taken a strong pro-labor stance here in the Commonwealth.”

Across the border in Maryland, things aren’t going nearly as well for workers.

On Thursday, Republican Gov. Larry Hogan vetoed a bill passed by the Democratic State Legislature that would have required businesses with more than 15 employees to grant five days of paid sick leave per year.

“If we allowed this legislation to go into effect next January, it would be disastrous to our state economy, and it would make Maryland less competitive in our region,” Hogan said at a news conference. “It would kill small businesses and jeopardize thousands of Maryland jobs.”

It remains unclear whether Democrats, who hold veto-proof majorities in both houses, will be able to override the vote. Paid sick leave passed the State Senate with the bare minimum needed to override a veto.

Hogan has vowed to try to find a way to seek compromise on the issues. Earlier, Hogan had proposed a bill that would have required business with more than 50 employees to provide paid sick leave and offer tax incentives to small business to provide them for their employees.

It can be incredibly hard for small businesses to match up with big businesses, especially as over time they are hoping to expand and build on what they have eventually getting bigger within their industry, however, this can not happen if they are not supported by their government and if they do not utilize the resources of small business help out there. For example, looking for the best banks for small business in florida, Maryland, Texas, or wherever they are based, can help them get the support they need. Governments must be able to match this and reach out in the best way for small businesses and their employees. While monetary benefits and reforms might prove useful, educating them on the basics of marketing their business in different parts of the city as well! If they would like to put up stalls, they could try to get rental displays from Classic Exhibits! Or if they want, they can move to a digital medium and advertise on television as well. The opportunities could be endless, only if the right knowledge is provided to them.

In March, the Roanoke River Basin Association, a North Carolina-based environmental group, notified North Carolina-based Duke Energy that it intended to bring a suit against the company under the federal Clean Water Act. The environmentalists allege that the company is dumping its coal ash pollution directly into Hyco Lake and Sargents River, in violation of federal law.

Duke Energy in response has sued the Roanoke River Basin Association, asking a judge to preemptively throw out the environmentalists’ suit. However, perhaps because Duke Energy has lost such cases in the past in its home state, the company has instead filed its lawsuit in Virginia.

“Duke Energy cannot run to another state because it knows that it will be held accountable for its coal ash pollution in the courts of North Carolina,” Mike Pucci, president of the Roanoke River Basin Association, told The News & Observer. “The people of North Carolina and Virginia expect Duke Energy to act like a responsible adult, not like a law breaker desperately trying to avoid facing up to the consequences of its wrongful activities.”

For more on the intricacies of the lawsuit battle, read the press release from the environmentalists’ lawyers here.

Earlier this year, Payday Folk Labor Ombudsman quit working on CSX railroad after 16 years of service. Now, he has published a book of poetry, Reading Rails, about his experiences on the railroad. The book even features photography from yours truly, Payday Senior Labor Reporter Mike Elk.

“Have you ever wondered what it would be like to be the person working on the train? This poetry is as close as you can get to life on the American freight railroad,” says J.P. Reading Rails is a collection of poems, songs, and narratives that I wrote while blowing that lonesome whistle, blocking traffic and well … working for a living.”

— Clarkston, Ga.-population 13,000-takes in 1,500 refugees per year, making the working-class, Deep South city the “Ellis Island of the South.” The Guardian has a look at how the small Georgia town has become a welcoming home for people from all over the world:

Brian Bollinger, the executive director of Friends of Refugees, a local organization that provides some refugee services, says that for both refugees and Americans coming to Clarkston “regaining a sense of place is a massive part of what this is all about”. But over naan and curry at the Kathmandu Café, he is also prosaic about the town’s embrace of refugees. “It would be utopian to suggest that was the original driver,” he says. “In the end, that was economics.”

What made Clarkston work for refugees, Bollinger says, are the opportunities afforded by its high-density apartment complexes and good transport links. It’s easy to catch a vanpool to the chicken factories two hours north, where many of the refugees first find low-wage employment. This was why Clarkston was identified in the early 1990s as a good resettlement hub, and now these same attractions – low-cost housing and proximity to the interstate – are part of what’s helping to attract young American professionals priced out of Atlanta.

Many Clarkston residents point out the town was not always so hospitable to refugees: their arrival was initially resented by many locals. But older opponents of refugees have moved on or passed away, and have been replaced by younger liberals. Bollinger calls Mayor Terry, who was elected in 2013 at the age of 31, “the physical embodiment of that change of perspective.”

In April, we partnered with the Chulita Vinyl Club, a collective of Latina DJs, and others to put together Resistencia Fest, a concert for young people that celebrated their protests against ICE raids. It was free and targeted millennial Latinxs, particularly high school students. It was us celebrating them through a community event. But we also used the moment to call people to take action and register them to vote. We did the same later that month at Bidi Bidi Banda, a birthday celebration and tribute for Selena Quintanilla. While we didn’t plan that festival, we know how much our community loves Selena and knew it would be a great place to engage with people. More recently, in celebration of Mother’s Day, we held a live mural painting event, where immigrant moms and children painted in front of the Texas State Capitol. The mural, titled Poderosa, was created by queer Latina artist Claudia Aparicio Gamundi and calls for an end to deportations while celebrating the strength and resilience of immigrant mothers.

In Household Words, Stephanie Smith draws a clear line from the one definition to the other: “From blemish … to strikebreaker, the history of the word scab … shows a displacement of meaning from the visceral or physical to the moral register … Just as a scab is a physical lesion, the strikebreaking scab disfigures the social body of labor-both the solidarity of workers and the dignity of work.”

Smith also points out that the term has mellowed some since it first entered the labor vocabulary. “Scab” used to be thrown into the conversation like a bomb. It was so vile and politically and emotionally charged that it caused shame and anger. Its power seems to have diminished a bit since the days when a piece of union literature, generally attributed to author Jack London, said:

“After God finished the rattlesnake, the toad, the vampire, He had some awful substance left with which He made a scab … When a scab comes down the street, men turn their backs and angels weep in heaven, and the Devil shuts the gates of Hell to keep him out. No man has a right to scab so long as there is a pool of water to drown his carcass in, or a rope long enough to hang his body with.”

— On Labor looks at the rise of mental health discrimination claims against employers, which have risen by more than 40 percent since 2006, and how allowing service animals at work could help destigmatize mental health issues.