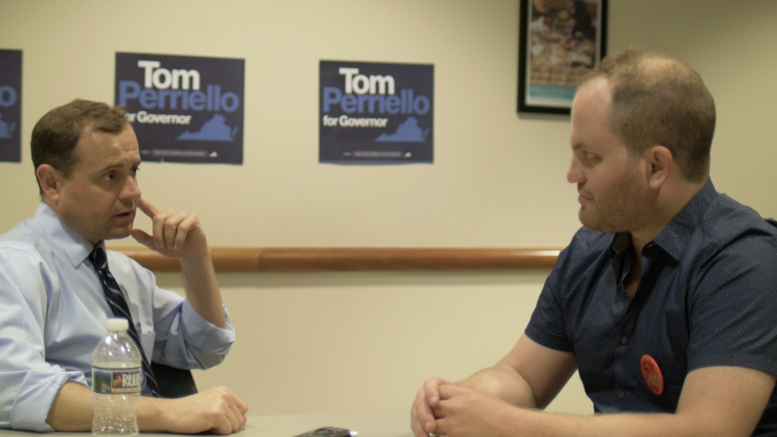 WOODBRIDGE, VIRGINIA. — On June 13, voters in Virginia will go the polls for the gubernatorial primary election. The race for the Democratic nomination has pitted establishment Democratic Lt. Gov. Ralph Northam against former Virginia 5th District Rep. Tom Perriello. Perriello has made waves by pledging to block future fracking pipelines, calling for free two-year community college for all Virginians, and supporting the repeal of the commonwealth’s “right-to-work” laws.

Following the endorsement of Perriello by the IBEW, Sen. Bernie Sanders, and many top Obama Administration officials, many progressives now see Perriello’s campaign in Virginia as laying the framework for a new populist political coalition.

Polling conducted by the Washington Post shows Perriello in a neck-to-neck race with Northam. However, the former congressman was leading the lieutenant governor by nearly 3-to-1 in Southwest Virginia.

This past week, Payday Senior Labor Reporter Mike Elk traveled to Southwest Virginia to investigate for The Guardian why Perriello is gaining so much support in the region, where activists point to Perriello’s desire to take on economic elites.

Perriello sat down with Payday to discuss how Virginia can move away from, as he puts it, “an economy of extraction to an economy of restoration.”

Late Wednesday, they talked for 20 minutes about the need for the Democratic Party to take on monopolies and the fracking industry. Perriello talks about the need to rebuild the labor movement in the South and focus on sustainable economic development—instead of tax breaks—to bring workers to the region.

“We need to get out of this mentality that we are one new corporation away from solving our economic development problems,” says Perriello. “You know, build a new industrial park, give them a lot of tax breaks, and it’s like monocropping in agriculture—it’s a very vulnerable thing.”

Instead, Perriello says Virginia needs asset-based development, which can “build on what the community already has.”

“Are we there to try to be a counter force [to] corporate power?” says Perriello. “Are we sitting down and talking to people about the cultural heritage we can draw from—everything from quilting to folk music to, you name it in that area.”

Perriello talks about rebuilding what he calls a “Bobby Kennedy”-style coalition.

“The basic disconnect is between leaders in both parties who are comfortable enough that they essentially think the system is working and we need to tweak it around the edges,” says Perriello. “I think when you spend time outside of those circles what you hear is the tectonics themselves are shifting in very scary ways. And you have to show up to listen to hear it.”

Perriello also faults the media for not understanding the deep cross-race, cross-class community organizing and dialogue going on in his campaign.

“We have really talked about racial justice issues in a way that frankly most journalists are absolutely terrified to talk about,” says Perriello.

During the interview, Perriello also traces his family lineage to the labor movement and calls for public employees in Virginia to have collective bargaining rights.

Be the first to comment on "Exclusive: Perriello Talks Race, Pipelines, Unions, and Building a New Populist Coalition in Va."