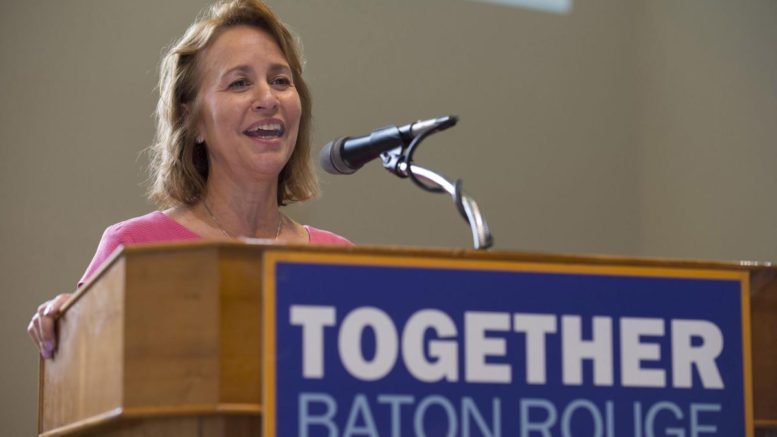 Together Baton Rouge members helped organize a potential strike if the state went through with plans to exempt Exxon from tax breaks.

It’s Payday Folks. Greetings from the Burgh where Melk is slowly recovering from strep throat as he preps for a trip to Racine to cover the closing days of Randy Bryce’s campaign.

The race in Racine appears to be tightening. This week, an internal poll showed Bryce leading by 1%.

Now, the website 538.com has rated the race a toss-up.  At this point, it appears that the race is going to come down to turn out. Now, the grassroots coalition that Bryce has built will ultimately be put to the test in the closing days of the campaign.

For more on this coalition, check out this excellent piece by veteran labor reporter Peter Gunn in the Progressive.

We are so far only $155 short of fully funding our trip to Wisconsin to cover Randy Bryce. If you haven’t already, you can donate here and if you want to donate again, please feel free to do so ($10 can create a ton of momentum on Twitter).

Down in Texas, our own Christine Bolaños has a look for Remezcla at how young Latinas are driving turnout:

‘So much of that power lies with young people and young women in our community. We feel this report is a call to action,’ said Cristina Tzintzun Ramirez, founder and executive director of Jolt.”

On Tuesday night, teachers in East Baton Rouge, Louisiana called an emergency meeting and voted to strike by a margin of 445-6. The strike came in response to four property tax exemptions totaling $6.5 million requested by Exxon Mobil.

The teachers say that they were prepared to strike if Louisiana’s Board of Commerce and Industry approved of the requested exemptions at their October 31st meeting.

However, facing the threat of a strike, the state decided not to hear Exxon Mobil’s request for abatement; a sign which many took as a victory.

The union, however, warned that if the abatements come up again, they are prepared to strike.

“The members of Support Our Educators Coalition are therefore postponing the walkout planned for Oct. 31 — permanently, if the exemption requests do not return; temporarily, if they are placed on a subsequent agenda,” wrote the union in a statement.

For more, check out the Advocate.

In April, Maya Little, an African American graduate employee and member of the Workers Union at the University of North Carolina, an affiliate of UE Local 150, was arrested after she poured her blood and paint all over the controversial Confederate monument on campus known as “Silent Sam”.

As a result of Little’s activism, she now faces potential expulsion from the University of North Carolina and is undergoing an Honor Court trial this week to determine if she can stay at the University.

“Ms. Little has not been the first student to paint UNC’s Confederate statue. It was graffitied to protest the assassination of Dr. Martin Luther King, Jr. in 1968 and the murder of Sandra Bland in 2015” wrote the officers of the UE in a letter to UNC official today. “NC State fans have painted it red; UNC fans have painted it powder blue. UNC officials, to our knowledge, have disciplined no students or workers for these acts. Ms. Little’s action reflects a popular frustration with UNC’s refusal to substantively address white supremacy in its own institution”.

“Disciplining Maya Little for defacing a symbol of white supremacy and racism while not disciplining others for the same offense of defacing the statue would be a grave injustice. It is hard not to conclude that Ms. Little is being disciplined, not for her actions, but for what her actions represent,” wrote the officers.

Today, Maya Little left the Honor Court in protest after Frank Pray, a right-wing activist, who has harassed anti-racist activists and supported Confederate monuments, was included on the panel.

(Full Disclosure: Melk’s father Gene Elk is the elected Director of Organization of the UE)

For an in-depth profile of Maya Little, check out the Writers’ Guild-represented Splinter News piece entitled “Maya Little Is Not Backing Down”

In May, Payday covered how 3 pro-ICE sheriffs in North Carolina were defeated by multi-racial coalitions.

In Raleigh-based Wake County, a key sheriff’s race could determine the fate of the controversial 287(g) immigration program. Sherrifs in only 5 of

The Sheriffs had all participated in various programs such as 287(g) and Secure Communities.

These initiatives are data sharing programs that make it easier for ICE to track undocumented immigrants. Between 2013 -2018, 1,438 people were deported as a result of the 287(g) program

“You see families torn apart,” Gerald Baker, a retired police sergeant who is running against Republican Sherriff Donnie Harrison, told the News and Observer. “I talk with my neighbors and look up and the dad’s gone. … For the most part, they don’t bother anybody here. These guys contribute to our economy, nationally and locally. They’re just here looking for a better life. I understand that.”

During the last two years, more than two dozen media outlets have opted to unionize.

In 2016, Payday covered in-depth the union-busting faced by 120 reporters when they sought to unionize at Law360.

“We don’t want to strike,” said union chair Juan Carlos Rodriguez in a statement put out by the NewsGuild. “But, after two years, we’re done with management dragging out these negotiations. This vote demonstrates that our newsroom stands united and is committed to securing a great contract, no matter what it takes.”

Payday this week mourns the death of Jim Webb.

“We are heartbroken to share that longtime WMMT staff and DJ Jim Webb (Wiley Quixote) has passed away,” wrote WMMT in a statement released on Facebook. “We don’t have many words right now, which is a shame cause Wiley would have had the perfect ones. This station wouldn’t be what it is without Jim’s humor, personality, and passion”.

— Buzzfeed has a long look at how one Nebraska town died after a raid by ICE:

The raid has reverberated throughout the once thriving immigrant population in O’Neill, a town of just over 3,600 people, so isolated that it’s the largest town in a 60-mile radius. Fear has gripped the community of Guatemalans, Hondurans, and Mexicans. Many now rarely leave their homes, worried that ICE may be around the corner or that long-time residents will call the authorities on them.

According to locals, more than a dozen immigrants have left O’Neill. Families have split up. And many workers caught up in the raid can no longer find jobs, subsisting on donations that at some point will end.

“In this town, I don’t think there’s anything — it’s finished,” said Rosa, a 65-year-old woman from Mexico who was arrested working at the massive hydroponic tomato plant on the edge of town, where many of the laborers were picked up. “A lot of people have moved away. We were the happiest before this, but now? We’re a sad community.”

— Our own Christine Bolaños has a look at Remezcla at the only state park in Georgia named after a Latino:

With a swing set, slide, and plenty of room to play tag, it might look like any other ordinary park. But in actuality, it’s a tribute to Sara J. González – a Cuban-born woman who inadvertently became a pioneering and leading advocate for Latino, immigrant, and minority rights in Atlanta, Georgia – and the southern state’s only park named after a member of the Latino community.

Ten years after her passing, her daughter, Isabel González Whitaker, honored Sara’s legacy and memory by developing an already-existing park in her namesake. The one-and-a-half-acre park now features the only all-abilities playground in the area and is also the neighborhood’s only wheelchair accessible park. It includes a children’s soccer field, a community plaza, and the only permanent education nook in the area debuting later in the fall.

The entire experience has changed González Whitaker profoundly and has brought her even closer to her mother, who made it her mission to improve the lives of others. The difficult life she led in Cuba shaped González’s values. She gave birth to Isabel’s older brother and sister shortly before the Cuban Revolution, which thrust her family into the spotlight. Her husband had attended school with Castro and radio stations denounced him as a non-sympathizer. The family then became vulnerable to death threats, prompting them to flee to New York.

Go to Remezcla to read the rest.

Be the first to comment on "La. Teachers May Strike over Exxon Subsidies – UE Member Faces Expulsion from UNC – Law360 Reporters Vote to Strike"