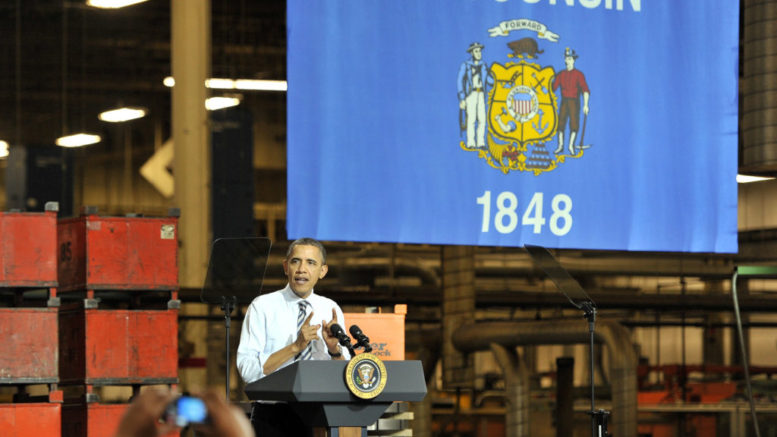 On Friday night, before the third and final Congressional debate between Randy “Iron Stache” Bryce and former Paul Ryan aide Bryan Steil, the crowd of assembled supporters broke out in a rendition of “Solidarity Forever”.

“When the union’s inspiration through the workers’ blood shall run. There can be no power greater anywhere beneath the sun” sang the crowd as two dozens rushed the stage in a scene of reminiscent of the 2011 Wisconsin Capital Occupation that radicalized Bryce as political coordinator of Ironworkers Local 8.

Backstage at the Oak Creek City Hall, the half-Mexican, half-Polish ironworker was stoked.

“I was able to hear it from the room where we were getting ready with final preparations,” wrote Bryce “And again, it was e-v-e-r-y-t-h-i-n-g”

The debate comes as millions of dollars of dark money ads have flooded into the district to falsely paint Randy Bryce as a deadbeat dad, a charge that his ex-wife disputes.

Additional attack ads have pointed to the fact that Randy Bryce had been arrested 9 times in his life. Two of the arrests were for civil disobedience, an additional arrest was for smoking a joint on the beach in mid-twenties, and an additional arrest occurred over 20 years ago when Bryce got a DUI while working on a construction job in rural Wisconsin. While not aware of the actual circumstances, surely Bryce might have sought out an experienced dui defense attorney to get him out of this murky situation.

The subsequent 5 arrests occurred because Bryce was caught driving without a license in order to get to work and because of unpaid fines and court dates that occurred as a result. All of these events occurred nearly 20 years ago.

However, the 9 arrests have taken central focus in the GOP’s attack ad featuring Bryce’s brother, James, a cop,, accusing his brother Randy of engaging in “cop hating rhetoric”.

An ad, which Randy Bryce’s mother, has asked local TV stations to take down.

On Friday, the veteran ironworker, clad in blue jeans, was ready to hit back when he took the debate stage. He quickly pointed to his opponent Bryan Steil’s track record as a corporate attorney, who advised Regal Beloit on merger and acquisitions. According to Regal Beloit COO Jon Schlemmer, one of those mergers, lead to the closing of its foundry in Wausau, Wisconsin as its work was outsourced to lower-paid workers in Mexico.

“It just blows my mind, again, listening to a corporate attorney who helps outsource jobs from Wisconsin to other countries, talk about good-paying jobs here,” Bryce said criticizing Steil’s plan to bring jobs back to Wisconsin.

“I just find it a bit ironic how much you harp on the word ‘attorney,’ I can think of at least nine times where a law degree would have come in really handy,” Steil shot back.

The ugliness of the attacks against Bryce comes as a new internal polling released by the Bryce Campaign shows that Bryce is narrowly leading the race by 1%.

With the attack ads flying, major surrogates are also expected to flood the state on behalf of the candidates in what is becoming a key showdown for organized labor.

On Wednesday, Donald Trump is expected to go to Wisconsin to campaign on behalf of Steil and Scott Walker, who is facing a tough re-election bid of his own against educator Tony Evers.

On Friday, President Obama is coming to campaign with Bryce and the entire Democratic slate.

The Battle in Wisconsin will likely be a neck-and-neck showdown in what has become a symbolic battle for the heartland of America.