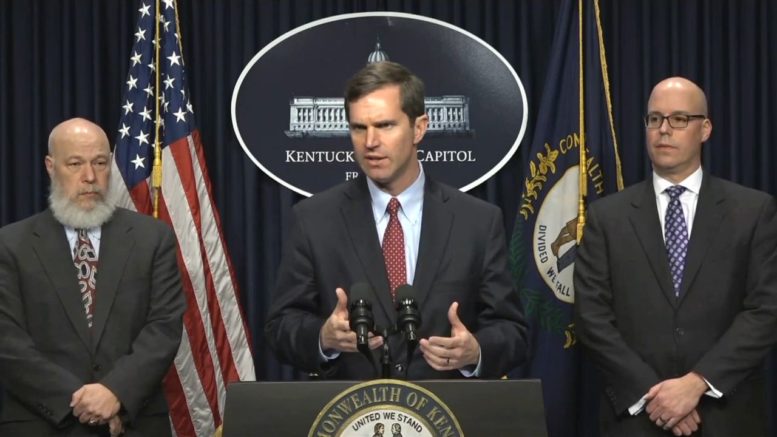 Newly elected Kentucky Democratic Governor Andy Beshear has received praise for his handling of the COVID-crisis. However, workers in manufacturing say that the Governor’s office has been slow in shutting down non-essential manufacturing.

This week, the state of Kentucky launched a hotline (1-833-KY-SAFER) for workers to call to report employers, forcing them to continue to work during the COVID-19 outbreak.

However, some workers complain that they are unable to get through to anyone one the hotline. Instead, they are being forced to work in dangerous conditions while they wait for the hotline to clear up.

At O’Neal Manufacturing Services in Louisville, where over 100 workers are employed, many workers complain that they are being forced to work, making steel for forklift parts. These days, with many companies ensuring the safety of fall arrest equipment, it is possible that there could have been a demand for height safety parts.

So, far O’Neal has refused to shut down the plant, taking advantage of vague language that allows employers deemed “essential” to stay open.

Some workers fear that the non-union plant could quickly become a breeding ground for COVD-19, with a large number of older workers being employed there.

“Everyone’s keeping up with the news, but the loudest people usually like to treat it like it’s over hype,” says “Lon”, a worker who declined to give their real name out of fear of retalation.

“The one breakroom is shared by all the shop floor workers, and lots of people aren’t washing their hands,” says Lon. “We share computer workstations and tools.”

Without a union, the Birmingham-based manufacturer gives its Kentucky workers, whose wages start at $16 an hour, only one day per month off and has no paid sick day policy. As a result, many workers at O’Neal feel that they have no choice but to come to work.

While plants like Ford’s 10,000 workers strong unionized plant in Louisville shuts down, many smaller non-union operators like O’Neal are staying open.

“They definitely would rather use this as a chance to make a profit while other factories in the area are taking safety measures,” says Lon.

Lon has tried to call the state’s hotline set up by Governor to get the state of Kentucky to come out and shut the place down. Despite trying for hours, Lon says he has been unable to get through to it.

“Its nuts, man. All I want is to properly social distance like officials are asking. I wanna see this shit come to an end,” says Lon. “

“Hell no, I don’t wanna die for them,” says Lon. “We aren’t making essential parts.”