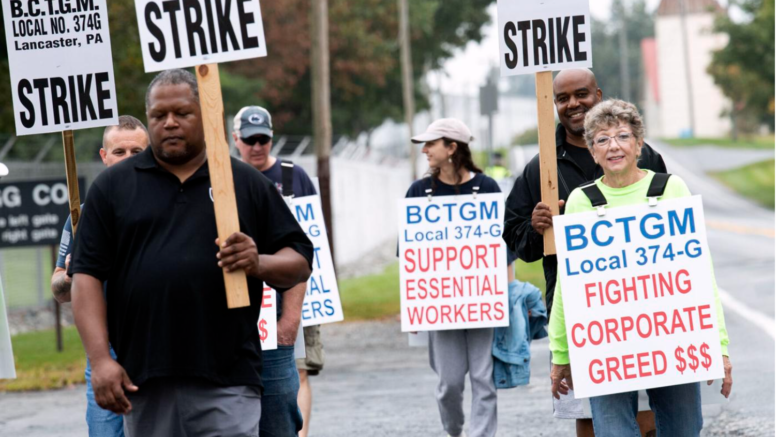 Greetings from the Burgh, where we’re getting ready to travel to Erie and cover a special Christmas party for the children of the striking Strayer ironworkers.

Donate today to help us pay for gas and food on the trip.

A Quarter of Americans Quit Their Jobs in 2021

New statistics from the Washington Post show that 46 million Americans quit their jobs this year.

The U.S. is now on pace to have a quarter of all workers quit their jobs in 2021. This massive upheaval in the American workplace has led to gains for many.

The United States is on track to register 46 million resignations this year, suggesting more than a quarter of the workforce will turn over. But it remains challenging for low-wage workers to get ahead.

Stubborn inflation is threatening to eviscerate the value of raises, while workers’ savings, in part from sizable government checks during the pandemic, are evaporating. With yet another coronavirus wave now bearing down, the physical and mental health stresses of service-sector work are unyielding. While data on what happened next to those who quit is scant, recent analysis suggests that many workers who have left the fields of restaurant and hotel work — the two sectors with the most resignations — end up back in those industries or in similarly low-wage work in retail, according to the California Policy Lab at the University of California.

Also, be sure to check out WaPo’s new podcast “Quitters,” which this week features interviews with eight Bradford, Pa. McDonald’s workers who walked off the job.

Over 5,000 Fred Meyer QFC workers are on strike this week on the West Coast.

Employees are being offered a ¢.50-cent an hour raise, which the union says is not enough.

​​“Fred Meyer’s callous disregard for their own essential workers is stunning considering the sacrifice these employees have made throughout the pandemic.,” said Sandy Humphrey, Secretary-Treasurer of UFCW Local 555, in a statement. “While so many were able to stay safely in their own homes, essential grocery workers showed up to work helping feed our communities. These employers should recognize their sacrifice by treating these workers with the basic respect they deserve.”

For more on the strike, check out Oregon Public Broadcasting.

In Worcester, Massachusetts, the Saint Vincent’s Hospital strike has gone on for nearly 300 days. The union appeared close to a deal, but the hospital refused to rehire all the striking nurses, which led many to fear that union activists would not be rehired.

For more, check out The Republican.

Kellogg’s Reaches 2nd Tentative Agreement
The BCTGM announced they had reached another tentative agreement with Kellogg’s. However, the agreement does not eliminate the two-tier wage system that led to the strike but does give workers $1.10 an hour.

In emails leaked to More Perfect Union, one Kellogg executive boosts that the most recent tentative agreement is a win for the company.

“In short… no overall gain for [workers] with 3 more weeks of strike and no income. No ratification bonus,” wrote the executive in a leaked email.

Earlier this month, Kellogg’s workers voted down a proposed tentative agreement. It’s unclear if this agreement will pass.

Alright, folks, that’s all for today!

Pass the hat to pay for gas to go to Erie to cover the strike.

Be the first to comment on "Kellogg Celebrates Weak Tentative Agreement – 1/4 of Americans Quit Their Jobs in 2021 – 5,000 Fred Meyers Workers Strike"