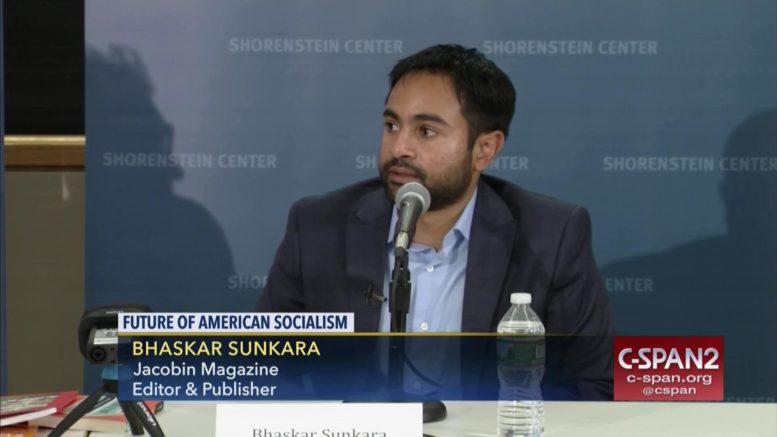 Jacobin Publisher Bhaskar Sunkara is being accused of reneging on a wage deal in his takeover of the British publication the Tribune. (CSPAN)

In his bid to take over the historic British left-wing magazine, The Tribune, Jacobin publisher Bhaskar Sunkara is being accused of reneging on wage deal by employees of the paper, who kept the publication alive during struggling times. Tribune was once the home of such greats as George Orwell and has since become the leading publication associated with the influential Momentum faction within the Labor Party.

The purchase of the paper seemed like an ideal takeover for Sunkara linking his viral socialist publication in America with the struggling legacy British paper.

This past weekend, Sunkara had a high-profile launch event attended by influential members of the Labor Party, including British member of Parliament Jon Trickett and Len McCluskey, General Secretary of 1.2 million member Unite the Union, the largest union in the UK. The Liverpool featured the French socialist leader Juan-Luc Melenchon as well as Julia Salazar, who despite falsely portraying herself as a working-class immigrant from Colombia, was successful in her bid to be the Democratic nominee for an influential State Senate seat based in Brooklyn.

The event received much fanfare, however underneath the takeover of the storied British publication by the American publisher, media workers activists say that he’s done it by exploiting those, who produce content for socialist publications.

Workers say that Sunkara promised that if workers took a settlement of only 70% of the back wages that they were owed that he would give them future work after taking over the publication. However, Sunkara in a statement to Payday confirmed that he would not bring the staffers back.

The workers in a series of open letters have accused Sunkara of lying to them.

“In the capitalist world someone who buys an ailing company and dumps its committed workers is known as an asset-stripper or robber baron, but at least they don’t claim to be socialists,” said former Tribune employee Ian Hernon.

The dispute between the British magazine’s staff and its new publisher Bhaskar Sunkara, the 29-year-old son of a doctor from the elite New York City suburbs of Westchester County, raises vital questions about how leftists publications treat the workers they employ.

The brash 29-year-old Bhaskar Sunkara, the founder and publisher of the Brooklyn based socialist magazine Jacobin, has proven to be one of the most controversial figures in the left press: known for increasing the reach of socialist writing while engaging in labor practices far less than socialist.

At a time when many speculated that print was dead, Sunkara built a socialist publication founded in 2011 that proudly boasts of publishing over a thousand articles a year, a print subscription of 30,000 and over one million page views a month online. In addition, the publication boasts of a specialized Jacobin book published by Verso press that has produced a dozen books, a separate academic journal “Catalyst: A Journal of Theory and Strategy of Strategy” launched last year, and dozens of Jacobin reading groups throughout the country that help the publication raise money.

However, Sunkara, has been accused of building his empire by underpaying his writers with many making on average $50-$100 a story.

For years, Sunkara and his allies have claimed that the socialist publication lacked the resources to pay its writers.

However, the purchase of the 80-year-old legacy British publication from  Owen Oyston, owner of the Blackfoot Football Club, raised questions about what exactly Sunkara did with the money he saved by underpaying his writers at the Brooklyn-based Jacobin Magazine.

In the last few years, the Tribune struggled with financial issues and discontinued print editions in January. During this period of financial distress, a skeleton crew of writers and editors struggled to keep the publication afloat as a strictly online publication as they shopped for buyers of the storied publication. As part of his proposed takeover of the publication, Sunkara promised to pay the writers only 70% of the back wages they were owed and give them their jobs when they were returned.

Now, writers say that Sunkara has reneged on his promise to bring the workers back after they agreed to accept only 70% of his wages owed for the years they spent keeping the publication alive.

“All the pious, pseudo-academic waffle in the world doesn’t really amount to a hill of beans. Our actions are what count. How we treat others is what matters” wrote George Osgerby in a letter protesting the move.

Reporters told Sunkara that they were outraged that he would renege on their deal and dismiss the workers from the publication. In an email responding to the disgruntled former staff, Sunkara and newly-appointed Tribune editor Ronan Burtenshaw, disputed the contributions of the editors who kept the publication alive during its financial stresses.

“While we appreciate all of those who have contributed to Tribune over many years, the claim in this instance that their stewardship of the project in the last three years ‘made it possible’ for Jacobin to take over the magazine is entirely false,” Burtenshaw told Payday Report in a statement later released online

However, the employees recently disposed of by Sunkara after they agreed to take a cut in back wages owed to them, have less than kind words to say about the jet-set Socialist publisher.

“You said you tried not to become the sort of editor/proprietor you despised. My advice to you is: try harder” wrote former Tribune employee Ian Hernon.

(Full Disclosure: Payday pays all of its part-time employees $32 an hour. Donate to help us pay them a fair wage)

(The piece has been updated to clarify statements made by the aggrieved former staffers of the Tribune and to clarify that the publication is owned by Owen Oyston. Initially, the piece stated that the paper was owned by Blackpool Football Club, which Oyston also owns in a series of complex).