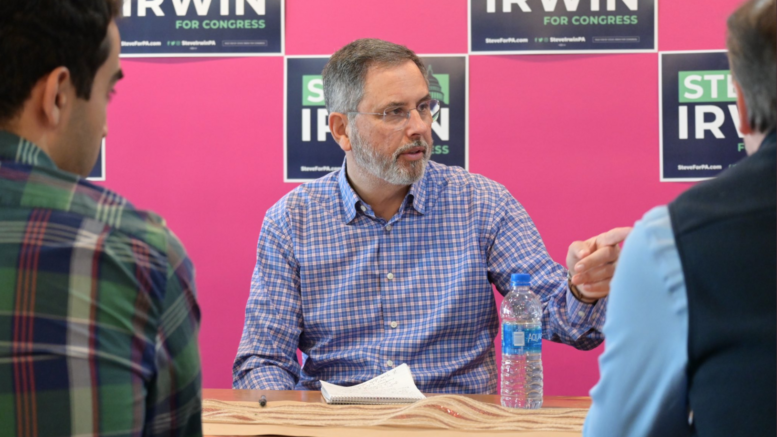 Steve Irwin's law firm fought the right of college athletes to unionize and against Crazy Mocha workers, who were fired for organizing (Photo: Steve Irwin for Congress)

PITTSBURGH, PA – Over the past week, Pittsburgh Congressional candidate Steve Irwin, who has won the support of most of Pittsburgh’s Democratic establishment, has attempted to refute Payday’s reporting that he was involved and directly profited from the “union avoidance” work of his law firm, Leech Tishman, which he co-owns as an equity partner.

In private meetings with journalists, and in a public endorsement meeting of the 14th Ward Independent Committee on Sunday, Irwin disputed Payday’s reporting on his law firm’s anti-union stance, saying that that was reporting being done by a “friend of Summer Lee,” referencing that Lee and I had attended Woodland Hills high school together in the early 2000s.

The dispute come as Irwin finds himself suddenly struggling to get labor endorsements in his race for Congress.

Earlier this month, the Pittsburgh-area AFL-CIO declined to endorse Irwin after Payday revealed that Irwin led a law firm division that advertised “union avoidance” services. So far, Lee has garnered the most union endorsements, with SEIU, the UFCW, and UE having endorsed her, while only the pro-fracking Laborers have endorsed Irwin.

Now, Payday Report has uncovered court documents that show the Leech Tishman law firm, which Ir also fought against the Steelworkers Union in their efforts to unionize college athletes at Northwestern. Additionally, Leech Tishman fought against organizing efforts by local Pittsburgh baristas at the Crazy Mocha coffee chain, who attempted to organize with the Restaurant Opportunity Center Pittsburgh.

According to his LinkedIn, Irwin states he is presently an Equity Partner at Leech Tishman and served as head of the firm’s Employment & Labor division for more than a decade. Irwin also states that he “continues to counsel clients on all legal aspects of the employment relationship and labor compliance.” On the Leech Tishman website, they state that they are a law firm that provides “union avoidance” services, a common euphemism for what union organizers label “union-busting.”

Irwin is no longer the head of the firm’s Employment & Labor Practice Group, and it remains unclear when he stepped down from this position as he claims to still be heavily involved in the day-to-day functions of the Group on the law firm’s website.

Both his campaign and his law firm did not respond to questions about when he stopped being head of the firm’s Employment & Labor Group.

However, as an Equity Partner at Leech Tishman, Irwin can still continue to profit from the firm’s work Employment & Labor Practice Group, which has been involved in a number of prominent anti-union cases.

In 2014, Leech Tishman filed an amicus brief on behalf of Northwestern University in a high-profile National Labor Relations Board case against the right of college athletes to unionize brought by the College Athletes Players Association, an organization backed and funded by the Steelworkers Union.

In March of 2014, NLRB Region 13 Director Peter Ohr ruled that athletes at Northwestern University had the right to unionize. Then, Northwestern appealed the regional NLRB ruling, bringing it to the members of the national board of the NLRB in Washington, DC, to rule on the decision.

Leech Tishman filed an amicus brief in support of Northwestern’s position that college athletes did not have the right to unionize. In court documents obtained by Payday Report, Leech Tishman argued that the NLRB “should find in favor of Northwestern University by ruling that the grant-in-aid student-athletes are not employees for purposes of the NLRA and thus a labor union vote should not be granted.”

Ultimately, in August of 2015, the NLRB declined to assert jurisdiction in the case, denying athletes at Northwestern the right to unionize.

In another case that began in the summer of 2020, Leech Tishman represented local Pittsburgh chain Crazy Mocha against charges that they had fired several workers for organizing with the Restaurant Opportunities Center of Pittsburgh.

The coffee chain closed most of its locations at the beginning of the pandemic in March of 2020, laying off most of its staff. When the chain began to reopen in May of 2020, seven workers, frustrated by the lack of communication from corporate management, filed a Coworker.org petition demanding answers for when they would get their jobs back.

“Many of us have worked for years to serve our customers with a high standard of customer service and care. We are valuable members of the business and should be treated as such,” the workers wrote in a petition that garnered 1,251 signatures. “Instead, we have been ignored and treated as if we were of no importance to Crazy Mocha whatsoever.”

After Crazy Mocha received Paycheck Protection Program money to rehire workers and reopen in the summer of 2020, the chain declined to hire several workers who signed the petition.

Crazy Mocha General Manager Kim Garrett told WESA in an email that the workers were not rehired “because of their actions in publicly disparaging the company and its owner.”

In August of 2020, the workers decided to file a complaint with the National Labor Relations Board, alleging that they were fired because of their organizing with the ROC Pittsburgh.

In court documents obtained by Payday Report, the NLRB ruled that Crazy Mocha had “been interfering with, restraining, and coercing employees in the exercise of the rights guaranteed in Section 7 of the Act in violation of Section 8(a)(1) of the Act. The Respondent’s unfair labor practices affect commerce within the meaning of Section 2(6) and (7) of the Act.”

The NLRB ordered that Crazy Mocha had to rehire four baristas who had helped lead the organizing effort against the chain.

In 2015, Irwin also worked with Leech Tishman against a Pittsburgh City Council bill that would have guaranteed paid sick leave to low-wage workers.

According to the firm’s website, Irwin directly solicited small business owners in 2015 to express their concern about the law’s impact and asked them to contact him at his email address if they wanted to speak out against the paid sick leave bill impact on small business.

After a four-year court battle that went all the way to the Pennsylvania Supreme Court, the law, which the Pittsburgh City Council passed in 2015, was finally enacted in 2020.

In a statement, Irwin’s campaign manager denied that he had any involvement in his law firm’s work against college athletes unionizing and Crazy Mocha workers organizing.

“Steve did not have any involvement in the cases about which you inquired,” said Irwin’s campaign manager Alistair Glover. “The fact is, Steve has a long track record of standing up for workers’ rights and supporting organized labor.”

Irwin’s campaign did not comment on how Irwin may have profited from the work in the law firm’s labor and employment division, which he headed for more than a decade.

“The continuing attempts by the Lee campaign to mischaracterize his support for labor is disappointing,” wrote Glover in the email to Payday Report. “But the voters of the district will see through her desperation tactics because Steve’s support for organized labor is clear.”

However, Payday Report researched this information regarding Irwin’s law firm’s anti-union work internally following a tip from a local union retiree. Throughout the research process into Irwin’s campaign, the Lee campaign did not return multiple requests for comment.

(Full Disclosure: Summer Lee and I attended Woodland Hills High School together in the early 2000s.)