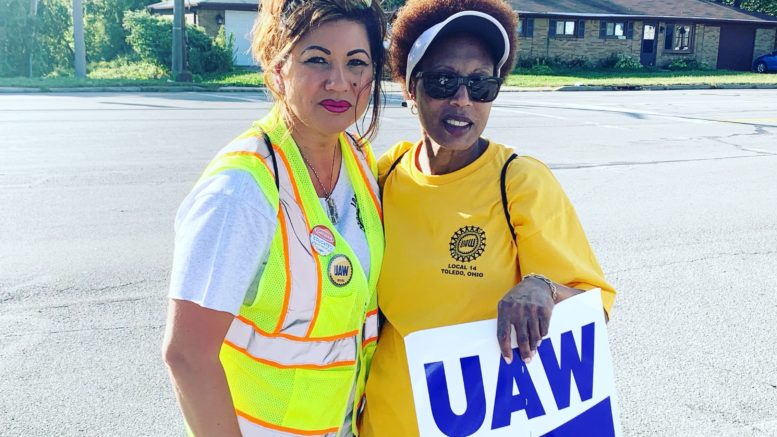 TOLEDO, OHIO – “September 16th was suppose to be my first day ” says a 41 year African-American GM worker Tula Beacham, who recently transferred to Toledo’s after her plant in Lordstown, Ohio closed” I’ve never been in the plant yet. When I got here, they were already on strike… its a little surreal”.

After 41 years at General Motors Lordstown facility, Beacham says she’s ready to fight against a company that has hurt her when they closed her plant and moved worked to Mexico.

“It was tough. So many of the union brothers and sisters had their families torn apart and it was horrible,” says Beacham  My parents are in Youngstown, my daughter is still there. It’s traumatic”.

Since the announcement of the plant closing in November of 2018, approximately 100 former Lordstown workers have transferred up to the Toledo plant. The addition of the workers, who have just gone through a tough fight over the plant closing, has buoyed the spirits of striking workers in Toledo.

“They have not gone unnoticed, they have come out, showed their support, and joined right into our Local 14 family” says Toledo GM worker Christina Horvath-Badge, a second generation GM employee, wearing a button over a fluorescent safety vest reading “Danger: Educated Union Member”.

Not only have the Lordstown workers played a key role in helping to buoy the spirit of workers on the picket at GM, but also helped remind union members of what they are fighting for: the reopening of plants like Lordstown.

As we talk, a man in a one of those gimmicky red-white-and-blue Uncle Sam suits show up dancing as he carries a boom box playing “Born in the USA”.

“The American Dream is being sold away by GM” says veteran GM employee Mark Race as he dances to Springsteen while holding a “UAW on Strike” sign.

On the picket line, workers try hard to keep spirits up as the strike stretches into its second week.

“We have to keep the high tempo energy cuz we dont know if the strike is gonna end this week or we are gonna go into another week” says a temporary worker, who wished not to be identified standing nearby.  “The more weeks that go by the tougher it is going to get”.

GM’s decision to cut off health care benefits upset many workers, but for many workers it has strengthened their resolve to keep pushing GM for what they feel they deserve.

“They are doing what they think they gotta do, right? So we just gotta do what we gotta do” says Tula Beacham