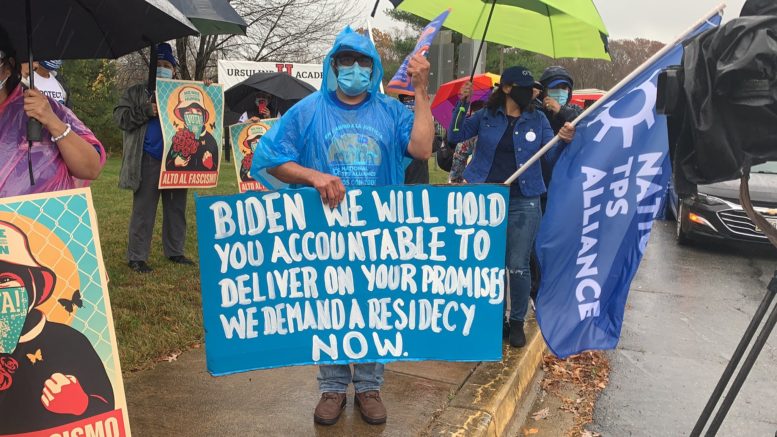 Folks, Greetings from the Burgh, where a group of more than two dozen news producers at CBS Pittsburgh became the most recent group to join the digital media unionization wave.

During the Obama Administration, more than 3 million immigrants were deported. But in the 2020 Primary, Biden called these deportations a “big mistake” and pledged to do better under his Administration.

“Barack Obama promised but never delivered. Today we are more organized & stronger than ever to make sure that this new [Democratic] administration delivers on its promises. An extension is not a solution, we deserve & demand a Residency Now,” the group tweeted.

For more videos of the march on Biden’s house, check out the National TPS Alliance page on Twitter.

The Washington City Paper has the story:

In the complaint, DCPS says the union’s email to teachers reminding them that they are entitled to take a “Mental Health Day” on Nov. 2 constitutes a strike. The complaint says the “sickout” resulted in 39 percent of bargaining unit members taking sick leave.

That same day, DCPS announced that it would not move forward with its plans to reopen schools to elementary students on Nov. 9 due to workforce issues. Many credited the union’s organizing for delaying a return to school buildings until workers felt safe. The mayor’s chief of staff even blamed the union.) A PERB decision that says DCPS failed to always negotiate in good faith meant school officials were not allowed to use survey results of teachers to make staffing decisions.

Now, DCPS is asking PERB to conclude that WTU failed to bargain in good faith because of the sickout. It also asks PERB to send a notice to teachers stating employees violated D.C. law and requesting they not strike again. The DCPS and WTU contract includes a specific article prohibiting strikes, otherwise known as a no-strike clause. If a strike is to take place, the contract says, WTU needs to declare the activity illegal and order teachers to stop. It is illegal for any District government employee or labor organization to strike in D.C.

For more, check out the Washington City Paper.

The competition is heating up for becoming Biden’s Secretary of Labor.

Yesterday, Hamilton Nolan at In These Times reported that Bernie Sanders is actively campaigning and lobbying for the position. Congressman Mark Levin (D-MI), a former AFL-CIO staffer, publicly announced earlier this week that he secured the support of two major unions, CWA and UAW, for the position.

“He is a card-carrying union member who has executive experience running a large city,” AFSCME President Saunders said in a statement. “There’s no doubt he’d be a high profile and passionate fighter for worker’s rights.”

Walsh has yet to commit on whether he will run for office again as an escape to the post as Secretary of Labor could keep Walsh’s political career alive.

Biden is personally very close with Walsh, as he attended Walsh’s swearing-in as Mayor in 2018 and Walsh also endorsed Biden in the primary.

As part of his campaign, Biden promised to protect gig workers that work as rideshare and delivery drivers by classifying them as regular employees. However, doubts remain about whether Biden will carry through on this.

Yesterday, Payday covered how Biden appointed former Uber advisor, former acting Secretary of Labor Seth Harris, to his labor transition team. Many worker advocates fear that after the passage of Prop 22 exempting gig workers from labor laws that other states will soon follow.

Lauren Kaori Gurley at Vice reported on the fight to protect gig workers in the Biden administration:

Biden and vice president-elect Kamala Harris have close political ties to both Uber and Lyft that could hamper any efforts to enact transformative change in the gig economy. Harris’ brother-in-law, Tony West, a former Obama Department of Justice appointee, is Uber’s top lawyer. On Tuesday, Biden appointed Seth Harris, a former deputy labor secretary under Obama who wrote a 2015 paper arguing that gig workers are not employees, to the Biden-Harris Department of Labor transition team.  The argument was later co-opted by Uber and Lyft to disenfranchise gig workers in California.

“Nothing that we needed to happen was going to get done under a Trump administration. But I’m not confident that the new president’s pretty bold commitments for gig workers will materialize,” Vanessa Bain, an organizer at the Gig Workers Collective and an Instacart shopper in Mountain View, California, told Motherboard. “I am optimistic, though, that we as organized workers can use our power to hold Biden’s feet to the fire.”

As someone, who covered labor’s failed fight for the Employee Free Choice Act back in 2009, I know how crucial accountability labor reporting is during a Democratic Administration.

However, giving to independent media outlets tends to go down during Democratic Administration as there is less desire for accountability as Nation Editor Katrina vanden Heuvel and others have observed.

Donate Today to Help us Hold the Biden Administration Accountable

And, remember, the best way to support us is to become one of our more than 500 recurring donors today.

“[Sex workers] are suffering right now, and they don’t have anywhere to turn,” PDX Stripper Strike Founder Cat Hollis told KOIN 6. “We’re providing educational grants, professional development grants, and direct aid—rent support, food, and hygiene supplies—to sex workers most impacted by prejudice and COVID. Organizations like ours are the only things keeping sex workers from falling through the cracks.”

The sum of money will be doled out through microgrants to pay utilities, internet, and rent. The organization is actively looking for sex workers who are Black, Indigenous, transgender, living with a minor, and/or may be homeless.

Yesterday a group of TV news producers at CBS Pittsburgh KDKA went public with their petition to unionize with SAG-AFTRA. Out of 27 producers in the possible bargaining unit, more than 75% announced that today they were petitioning to have the National Labor Relations Board to hold a vote recognizing them as a union.

“Today, we are just as proud to join Pittsburgh’s rich tradition of labor unions fighting for workers’ rights,” wrote the organizing committee in a statement provided to Payday.  “All of us joined KDKA because we believe in informing the public and providing context for the ‘first draft of history…Organizing with SAG-AFTRA will ensure that we can continue to provide the professional journalism that Pittsburghers have come to expect from KDKA-TV since 1949.”

On-air talent and camera operators at the station are already unionized and organizers are optimistic that KDKA will not attempt to run a scorched-over, anti-union campaign against the workers.

For more, check out SAG-AFTRA’s release. I

Finally, today ProPublica became the first news outlet to experiment with accessible language for the intellectually disabled. The Nieman Lab has the story:

For an investigation into denied disability benefits in Arizona and an accompanying editor’s note, ProPublica is experimenting with plain language — a type of text that uses common words, short sentences, and clear structure to make information more accessible to those with intellectual and developmental disabilities.

This is the first time ProPublica has produced a translation into plain language. We’ve increasingly seen newsrooms experiment with accessibility, including The New York Times’ Braille and audio versions of their special section on disability, but ProPublica’s translation appears to be the first time a plain language version has been produced by a news organization that isn’t specifically produced by and/or for people with intellectual and developmental disabilities.

For more, go to ProPublica.

Folks, that all for today. The next few weeks are sure to be hectic as the potential Biden administration emerges. We will need your donations more than ever.

And don’t forget, the best way to support us is to sign up as a recurring donor today.