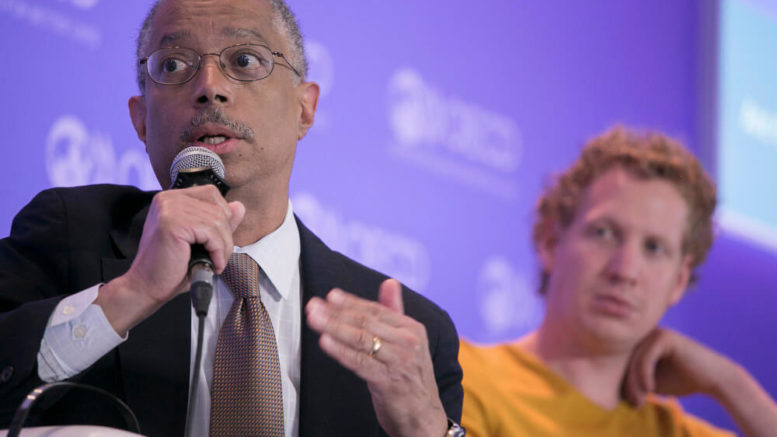 Greetings from the Burgh where you, Payday readers, have successfully won the fundraising strike and put us back into action.

At many publications, a fundraising strike could have lasted for weeks. Fortunately, we know many of our readers are union activists and there was a desire to quickly meet the payroll demands of Payday Report and end the strike.

We raised $1625 in less than 24 hours, which helped us greatly rebuild our reserve funds. Thank you to everyone who chipped in.

Donate to Help Us Get Up to Up to $2,000 and avoid future strikes here at Payday Report.

And as always, the best way to support us is to sign up as a recurring donor today. Or, if you’d like to donate quickly, our Venmo is @PaydayReport.

By 2032, the majority of the working class will constitute people of color. Low wage jobs are also overwhelmingly staffed by people of color. For these reasons, many feel that a person of color should be chosen for Secretary of Labor, instead of Boston Mayor Marty Walsh or Michigan Congressman Andy Levin, whose names have been floated by major union leaders.

However, American Prospect Founder Robert Kuttner floated the idea that Black AFL-CIO Chief Economist Bill Spriggs should be nominated to be Secretary of Labor, writing:

Bill Spriggs, chief economist of the AFL-CIO and a senior economics professor at Howard University, served as assistant labor secretary under Bob Reich in the Clinton administration. (Disclosure: Spriggs serves on the Prospect board.)

Last June, Spriggs sent a powerful open letter to economists after George Floyd’s murder, calling on fellow economists to recognize the racist roots of disparities in income and wealth.

People who can navigate the tricky shoals of labor and race are in short supply, and Spriggs is one of the best. These issues arise in the context of public works and public infrastructure programs, where community groups seek opportunities for young people of color and some unions want the jobs to go to established trades. These projects and jobs will likely be increased under Biden.

As more and more signs emerge of the atrophying state of organized labor’s political programs, a new analysis by the LA Times shows that a majority of union members voted for Prop 22 in California, exempting drivers from permanently meeting minimum wage laws.

The analysis also found that communities of color, where many drivers are employed by the gig companies, voted overwhelmingly for the measure:

Opponents objected to the campaign’s claim that Proposition 22 would advance racial equity, saying it would stifle wages and highlighting the fact that a public affairs firm run by California NAACP’s president was paid $85,000 by the yes campaign.

A Times examination of precinct-level data in Los Angeles County shows the companies’ argument held sway in its dense core, finding support in lower income areas including plurality-Black neighborhoods such as Inglewood and Compton, and majority-Latino East Los Angeles.

It also won suburbs in the San Fernando Valley, affluent communities such as La Cañada Flintridge, and rare Los Angeles precincts where President Trump was victorious in Beverly Hills and Santa Clarita.

A band of wealthy or increasingly affluent liberal-leaning neighborhoods stretching from Santa Monica and Venice, across to Los Feliz, Highland Park and South Pasadena mounted the strongest opposition, decisively voting down the measure.

For more, go to the LA Times.

In Washington State, doctors at MultiCare clinics throughout the state are threatening to strike over unsafe working conditions. KING-TV has the story:

“We still don’t have enough supplies, and we have to reuse some of the masks that they provide us,” Union of Physicians and Dentists spokesperson Frantz Alphonse told KING-TV.

For more, go to KING-TV.

In Illinois, Red Cross workers are picketing over being forced to quarantine without proper pay. Peoria Public Radio has the story:

At least 10 employees have contracted COVID-19, and dozens more have isolated for 14 days or more due to COVID exposures, according to AFSCME, the union representing about 125 of the blood collection workers across the region.

Bobbi Terell, a collections specialist at the American Red Cross in Peoria, said those workers aren’t paid during quarantine, adding that puts them and their families in some tough spots.

“A lot of our people here do have children, and it’s hard to run a household with no pay,” Terell said. “When you’re missing two weeks of pay, it’s just putting a burden on families.”

Like many workers during the pandemic, Navistar workers in Central Pennsylvania, members of Teamsters Local 776, are being asked to take healthcare cuts.

But the workers decided to defy management and went on strike November 4 at Navistar’s facility in Manchester, PA.

“They have had enough and are demanding to be treated with dignity and respect, and that starts by negotiating a fair contract that protects their families as well as their economic, health, and retirement security,” said the union in a statement.

Workers are collecting donations for making a $5,000 strike fund on GoFundMe.

Employers Not Taking Advantage of Government Programs to Give Hazard Pay

Vermont passed legislation to subsidize employers that granted hazard pay grants of up to $2,000 to frontline workers. However, so far, major employers including CVS, Home Depot, Costco, Walmart, Target, and Dollar General haven’t taken advantage of the programs.

WPTZ in Burlington has the story:

That grant is a big deal. That is paying off your car. Paying back rent,” said state Sen. Chris Pearson, of Chittenden County. “This is really important and a small token of our ability to say thank you to tens of thousands of workers across this state.”

Pearson joined Sens. Tim Ashe and Michael Sirotkin at a news conference outside a CVS pharmacy in Burlington Thursday afternoon and named names.

“We saw a success story in recent days where Shaw’s (Supermarkets) reversed an earlier decision not to apply and are now saying they will,” Ashe said. “Hundreds of employers have stepped up on behalf of their employees and have done the modest administrative task of verifying which employees are eligible so those checks can go out the door. The bad news is some large employers have… not applied.”

For more (including some responses from a few of the companies) check out WPTZ.

Alright, folks, congratulations on winning Payday’s strike to meet our payroll. Help us avoid another and donate.

Remember, always, the best way to support us is to sign up as a recurring donor today.

For any tips and story ideas, email [email protected]