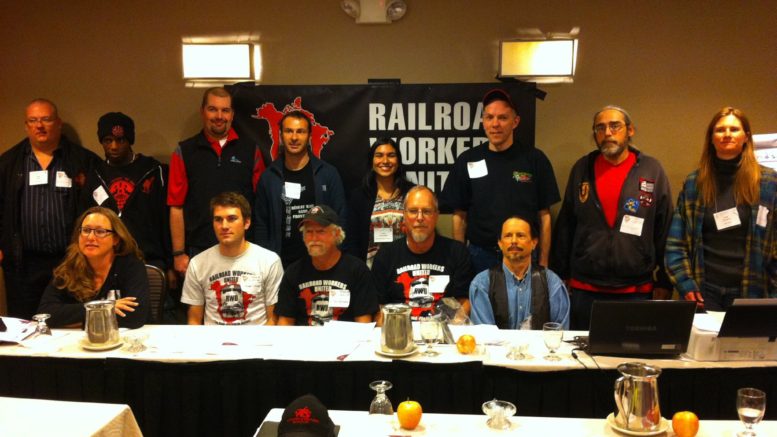 Greetings from Washington, D.C. – the hometown of Duke Ellington.

So far this month, Payday Senior Labor Reporter Mike Elk has driven over 2,400 miles from Conneautville, Pennsylvania to Canton, Mississippi to Huntsville, Alabama to Nashville to Louisville and now to D.C. Next up, we have Raleigh, North Carolina, Charleston, South Carolina and Atlanta.

If anyone wants to chip in for gas mileage, we got a fund going here. So far we have raised $145 towards our $1,500 goal to cover our trip costs. Pitch in here.

(Also, ICYMI: Check out our 1,800-word profile of how Alabama Indivisible activists are scoring victories in the fight to save Obamacare.)

This week’s Lunch Pail goes out to Nathan Howard, Justin Clecker, and Nathan Yarborough, who won their jobs back in Montgomery, Alabama after the NLRB ruled that Hyundai illegally fired them. Hyundai must rehire and give back pay to the three workers, who walked off the job over a scheduling dispute right before Christmas 2015. The company plans to appeal the ruling.

In this week’s budget, the Trump Administration proposed to eliminate the Chemical Safety Board. The 40-person agency is an independent federal agency that studies federal disasters and makes recommendations on how other agencies can change their rules to prevent these disasters.

The Chemical Safety Board is fiercely independent and will often publish public criticism of agencies in order to provoke changes, thus making it a likely target of the Trump Administration’s ire.

“For over 20 years, the CSB has conducted hundreds of investigations of high consequence chemical incidents, such as the Deepwater Horizon and West Fertilizer disasters. Our investigations and recommendations have had an enormous effect on improving public safety,” said Sutherland in a statement. “Our recommendations have resulted in banned natural gas blows in Connecticut, an improved fire code in New York City, and increased public safety at oil and gas sites across the State of Mississippi. As this process moves forward, we hope that the important mission of this agency will be preserved.”

The Houston Chronicle has an in-depth look at how the CSB’s investigations have spurred chemical- and workplace-safety reform.

Trump’s budget would also eliminate the independent Appalachian Regional Commission. The commission, first created in 1965, is a state-federal partnership that provides grants to fight poverty in Appalachia. The agency focuses heavily these days on helping communities dealing with the effects of coal mining closures.

The commission is comprised of 13 governors whose states include sections of Appalachia and the ARC co-chair Earl Gohl, who was appointed by President Obama. The ARC has an annual budget of only $146 million, but works to coordinate economic development efforts across 13 different states.

The move to cut the agency’s funding has met opposition from many, including some Republicans like Eastern Kentucky Rep. Hal Rogers, who told the Lexington Herald-Leader that Trump’s cut were “draconian, careless and counterproductive.”

“Today, nearly everyone in the region has access to clean water and sewer, the workforce is diversifying, educational opportunities are improving and rural technology is finally advancing to 21st Century standards,” Rogers told the newspaper. “But there is more work to be done in these communities, and I will continue to advocate for sufficient funding for ARC and similar programs, like the Economic Development Administration.”

Then, this past year, the Democratic Party lost control of the State House in the Trump wave.

Now, this week, the Kentucky Legislature passed a bill allowing the state to have charter schools, a bill that the state’s Republican Gov. Matt Bevin is expected to sign.

“This is absolutely one of the worst things I have seen to happen to public education in my lifetime,” Senate Minority Leader Ray Jones told the Louisville Courier-Journal. “The people who will pay the price will be our children.”

This week, a bill in the Arkansas Senate that would bar local municipalities from increasing the minimum wage failed to garner sufficient votes to forward the bill to the State House. However, the victory may only be temporary, as the bill’s backers pledged to revise it to address concerns about local control. They say that they will attempt to see if they could pass it later in the session.

However, the Arkansas labor movement suffered a defeat this week when the State Senate passed a bill that would allow companies to sue whistleblowers who film wrongdoing on company property. The bill passed the Senate by a measure of 28-3 and is expected to pass the State House.

The move comes as a Florida House Appropriations Committee approved a bill this week that would eliminate food stamps benefits for an estimated 230,000 Florida residents.

“I believe the city is trying to move in a positive direction, away from criminalization of sharing food with people who are experiencing homelessness, and that should be applauded,” Food Not Bombs volunteer Jimmy Dunson told Bay News 9. “I believe the city still has a long way to go toward policies that accept compassion.”

This week, social media was filled with tech and media types complaining about the lack of Uber and Lyft transportation at the annual South by Southwest festival in Austin, Texas. Both Uber and Lyft left Austin in protest last year after the city passed an ordinance requiring stricter background checks.

Instead, seven different groups have emerged in Austin to take the market share previously held by the ridesharing duopolies. CNN Money has a look at how cities can move behind Uber & Lyft:

“There’s no secret sauce,” Joe Deshotel, spokesman for Ride Austin told CNNTech. “The technology is becoming easier to replicate. It’s really about culture. Do riders and drivers like what you’re doing? Do they feel like they’re a part of it?”

It’s a no-frills operation. The office has rickety ceiling tiles and a single bathroom. Staff meetings are conducted via Google Hangouts. Recently, Ride Austin began to break even on its trips. More funding is still needed for salaries and overhead.

Passengers are encouraged to round up their fare to the nearest dollar, and give the difference to a local charity. In February, RideAustin announced it has donated more than $100,000 to charity. It has seen record ridership in the past month.

Ride Austin sprung up immediately after Uber and Lyft exited. Fasten, an existing Boston ridesharing service, followed suit and is among the most popular new services in Austin. Ride Austin will charge surge pricing, but Fasten does not. Fasten uses “boost pricing,” in which a customer can get a ride quicker if they choose to pay extra.

After 15 years, JP Wright Quits the Railroad & Launches a Patreon

This week, Payday Folk Labor Ombudsman J.P. Wright, a 48-year-old locomotive engineer by trade, quit the railroad after 15 years of riding the rails. His wife, Donna, has taken a job as a teacher in Grand Junction, Colorado.

Wright released a video on Patreon explaining his decision and his future plans to launch the Railroad Music Collective. He plans to regularly release songs, poetry, and videos about organizing.

So far, three patrons have pledged $10 a month to the Railroad Music Collective.

(Full Disclosure: Payday Senior Labor Mike Elk was proud to be the first monthly patron of the Railroad Music Collective).

— The Christian Science Monitor has a long look this week at how the Coalition of Immokalee Workers plans to expand to six other states—mainly in the South—and to other migrant-worker-dominated occupations:

Formed in 1993, the CIW tried to improve wages and working conditions for tomato pickers by pressuring their employers, the Florida growers. Eventually they decided to shift their focus to where real leverage lies, with the corporations that buy the tomatoes and sell or serve them to the public. A four-year boycott yielded an agreement with Taco Bell in 2005, and other big companies followed, including McDonalds, Burger King, and Whole Foods. The retail giant Walmart signed on in 2014.

So far, 14 major corporations have signed on to the CIW’s “Fair Food Program.” The Fair Food Program requires companies to pay a few cents a pound extra for tomatoes, most of which goes directly to the pickers. It also requires them to buy from growers who commit to improved working conditions, including access to shade, drinking water, and bathrooms. An independent organization, the Fair Food Standards Council, monitors and enforces the agreement.

The tomato pickers and their allies call this approach “worker-centered social responsibility.” It targets well-known brands and, in contrast to corporations’ own ethics codes, use agreements that can be independently monitored and legally enforced. Another essential feature is close worker involvement. In Florida, the tomato pickers were able to define small but important details such as what constituted a full bucket of tomatoes – not mounded, but level with the brim. Pickers receive regular training on the details of the Fair Food Program and access to a 24-hour hotline to report violations.

In this way, experts say, the tomato pickers avoided two shortcomings that have undermined other consumer-driven campaigns on behalf of low-wage workers: poor compliance and a lack of worker participation.

“The way in which they’ve handled these two large problems is remarkable,” says James Brudney, an expert in labor law at Fordham University in New York. “There’s no reason this model can’t work across the United States.”

— The Undefeated has a look this week at what happened during spring training in 1962 when the Phillies tried to integrate a hotel in Clearwater, Florida.

— Finally, Scalawag has a long look at a massive fish kill caused by textile mill pollution that happened on the Ogeechee River in 2011 and how the local community responded to it:

In our shared memories, the river is where we first tasted beer, where we fished together by firelight, where we went with our sweethearts. Just knowing that the water flowing around our ankles was on its way to the Atlantic Ocean — that made it easier to imagine the world of possibility that lay beyond our little towns and farms.

Which is why “pollution” meant one thing for state and federal investigators of the fish kill, and quite another for the anxious locals. As far as the professionals were concerned, it was chemistry, a matter of equations: It might be necessary to alter the input by changing a variable or two, so as to get a different, more palatable output.

For the locals, in contrast, the fish kill amounted to much more than a calculation error. It was a profanation, a blight upon the land, an existential threat.

Go to Scalawag to check out the full story.