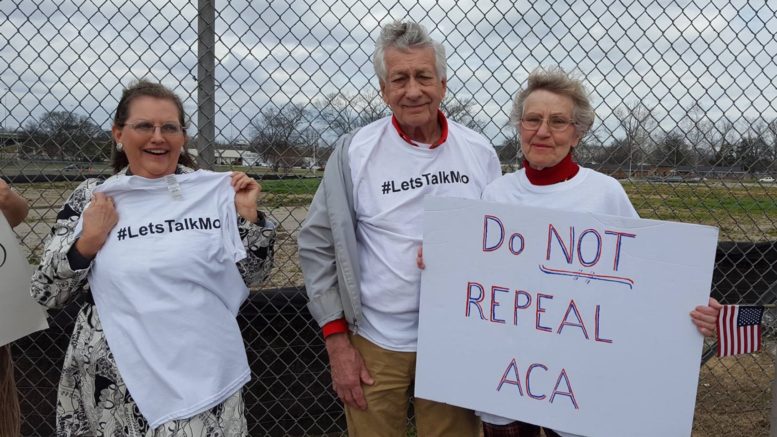 HUNTSVILLE, Ala. – “No, no. He’s got to go,” shouts a crowd of 75 mostly white-haired protesters wearing white #LetsTalkMo shirts in front of the Madison County Chamber of Commerce. “We don’t want no Mo’ Mo.”

The protesters are angry that their congressperson, Republican Rep. Mo Brooks, has refused to hold a town hall meeting to discuss the plan of House Republicans to cut Obamacare.

“Mo Brooks should not be afraid of us. I can certify that all of these people are from his district,”  says Janet Watson, who, like many of the women here, has pinned her zip code to her shirt.

“These are old Episcopal Church ladies,” says Huntsville native Sherry Broyles, my host for a four-day stay in Huntsville, a self-described “child of the ‘60s”, and executive director of the Inside Out Studio, an arts program known for its work with the disabled in the region.

“Now, for the first time ever, we are starting to see these folks turn out to protests,” says Broyle.

It appears that the protests may be having a serious effect, as Brooks has waffled on supporting the bill.

“We are being asked to vote for the largest Republican welfare plan in the history of the Republican Party,” Brooks told Fox News last Saturday. “To get my support, we have to keep our commitments to the American people. We promised that we were going to repeal Obamacare. The House leadership plan is not a repeal of Obamacare. It keeps substantial parts of Obamacare in place, and it copies or repackages other parts of Obamacare.”

While Brooks is offering a conservative argument about why he is against Paul Ryan’s plan, many local activists say it’s a convenient excuse, one which would allow Brooks to skip a controversial vote that could cost him his seat in either a competitive primary or the general election.

They attribute Brooks’ waffling support on supporting Obamacare to the massive, unprecedented protests that he has faced in his district. The desire to save Obamacare has ignited a fight in this red corner of the South that could have long-lasting effects in mobilizing progressive-minded folks in the South, who in the past have been hesitant to mobilize.

“We’re very, very Southern,” says Chuck Puckett, a local activist in his 50s, clad in a University of Alabama “Roll Tide” shirt while leading the “No Mo’ Mo” chants. “We’re as Southern as it gets, and sometimes we just don’t feel right talking bad about people. We don’t want to raise a fuss.”

Despite their previous rarity, such protests have become nearly a weekly occurrence, as progressives in Northern Alabama report seeing a spike in mobilization following the election.

The activists at today’s rally are a part of a group called Indivisible. The organization was founded by former congressional staffers who saw Obama’s initiatives defeated by the Tea Party. Indivisible wrote a 35-page guide that details the most effective way to get inside the heads of members of congress, including through town halls, office visits, and protests.

At Indivisible’s first Huntsville meeting in January, organizers booked a room at a local hotel that could hold a town hall. To their deep shock, more than 465 people showed up.

“They couldn’t get all the people in the room,” says Carol Puckett, Chuck’s wife and one of the lead organizers of the Indivisible group. “They had to have two sessions in their conference room. So one group had to stay outside while they did one of the trainings in there. They broke off the third, and I led it in the breakfast area.”

The energy has many progressives thinking that perhaps they may be able to flip the seats back to Democrats. Despite the fact that Trump won the district by a margin of 64.7 percent, many activists were quick to point out that the voters in the district have a track record of splitting the ticket. Indeed, until 2010, no Republican had held the seat of Northern Alabama’s 5th Congressional District since Reconstruction.

Anchored by the 190,000-person city, home to NASA’s Marshall Space Flight Center, the district has one of the highest concentrations of Ph.D.s in the country.

The largely Appalachian and industrial region of Northern Alabama has also been a stronghold of union density in the anti-union South. However, in recent years, Alabama has faced mass deunionization with the state losing 37,000 union members in 2016 alone. The labor movement in Northern Alabama has been particularly hard hit by the closing of coal mines, as well as the downsizing at Redstone Arsenal and U.S. Steel.

Continuing attacks on the Alabama Education Association, whose longtime leader, the late Dr. Paul Hubbert, was known as “the Real Governor of Alabama” for being able to maintain Democratic control of the state Legislature until 2010, have also hurt the Democratic Party in Alabama.

Like many places that have been battered by the effects of deindustrialization and deunionization, activists are working hard to swing voters back to the Democratic Party.

“If we are ever gonna take back the 5th district, it would have to be in a wave election year, like 2018 could be,” says Madison County Democratic Party Treasurer Larisa Thomason.

Thomason says that Democrats have struggled in recent years to recruit credible candidates to retake the 5th District. However, this year, she says the party has been overwhelmed by the amount of people interesting in running. She says that the cast of interested candidates is more prestigious and viable than in years past.

“I have been active in Alabama politics since I collected signatures to get John Anderson on the ballot in 1980, when I was high school,” says Thomason. “It’s like nothing I have seen, [the activity] since the election this year.”

Indivisible is also a non-partisan group and stresses the importance to local activists of organizing elections against Republicans in general elections as well as organizing primary challenges by moderates against ultra-conservative Republicans.

In districts like the 5th, many local activists have flirted with the idea of backing a moderate Republican challenger to keep Rep. Brooks’ appetite for Obamacare cuts low.

While it is uncertain that Brooks can be defeated, it is clear that their protests are changing the narrative of how Brooks is covered in the district. It may also be causing him to lose stomach for cutting Obamacare.

“In my judgment, we don’t have the votes in Congress to pass a repeal bill, in part because of what these people are doing,”  Brooks told WHBP Radio 800.

Brooks, for his part, has refused to do any public town halls.

“I will not conduct public town halls that empower Democrat activists, anarchists, socialists and disruptors to spread what I believe are anti-American values. If Democratic disruptors want attention, they can earn it without my help,” Brooks told the assembled crowd at the Huntsville Chamber of Commerce.

As a result of Brooks’ refusal to hold a public town hall, the media coverage in the district has changed dramatically.

Goodwin is emblematic of the trend of Southern activists being mobilized to retake the South.

Until last year, Goodwin had been a reading intervention teacher for middle school students struggling with their ability to read. He said that he was propelled to get more involved in politics after having to counsel Latino kids warned about being deported and the rhetoric of the Trump campaign.

“On average, every other day, it was being brought up—something that was said or something that could happen,” says Goodwin.  “[The kids] were worried about friends or families or themselves. It brought up a lot of anxiety for them, probably even more than they were letting on.”

Last summer, Goodwin quit teaching and went to work for Hillary Clinton in New Hampshire. Now back down South, Goodwin has been volunteering full time to help train people and build out the local Indivisible. The group holds regular trainings and near-weekly actions.

Activists say that social media has allowed them to recruit progressive-minded Southerners, who previously felt isolated in their political beliefs.

“Roughly 90 percent of the people involved in our group have never done anything before,” says Goodwin. “A lot of people said they thought they were the only person who was this angry and they felt more empowered by seeing so many other people who believe what they believed.”

Through their local Indivisible group, which has more than 600 members, local activists share critical news article of Brooks. In the process, they are creating an echo chamber to help get information out about the negative effects of cutting Obamacare.

Goodwin says that the coverage of the protests has propelled Southerners afraid of speaking out publicly to feel more comfortable in doing so and get involved in organizing.

29-year-old Huntsville native Matt Hennigan had not attended a protest before the Women’s March in Washington, D.C., which he attended with his wife, sister, and mother. He said that seeing so many people in the capital inspired his family to go back home and do more to get folks active.

Part of the reason he hadn’t attended protests before was that it wasn’t something that is commonly accepted in Southern society, he says.

“There is that Southern tendency to keep your politics to yourself. People don’t want to upset someone or seem inconsiderate or rude or ruffle feathers,’’ says Hennigan. “If you go out and you see people at protests, that just seems bizarre to most people. I think that is starting to shift as people see more and more people that they know personally out and active in the political landscape.”

“They seem less intimidated by it, and it seems less foreign,” says Hennigan. “This is something that I am glad to see normalized in the face of Trump’s actions.”

For many locals, the silver lining of the Trump Administration is that it has forced people in Huntsville, who never protested, to get active and involved in groups like Indivisible. The group says that it is going to focus on continuing to pressure Brooks on saving Obamacare.

While they fight to unseat Mo Brooks, activists say that maybe, just maybe, their growing army of Northern Alabama rebels may be able to .win.

“Mo thinks he can’t be beat,” says Thomason. “He thinks he is invulnerable, and that is the exact moment when you don’t notice the people sneaking up behind them.”

Huntsville, Alabama was the second stop on Payday’s Southern Resistance Road Tour Reporting Fund.  Donate here so that we can afford gas, food, and toll roads to continue our tour throughout the South.

Be the first to comment on "In Northern Alabama, Indivisible Activist Score Wins in Fight to Save Obamacare #LetsTalkMo"