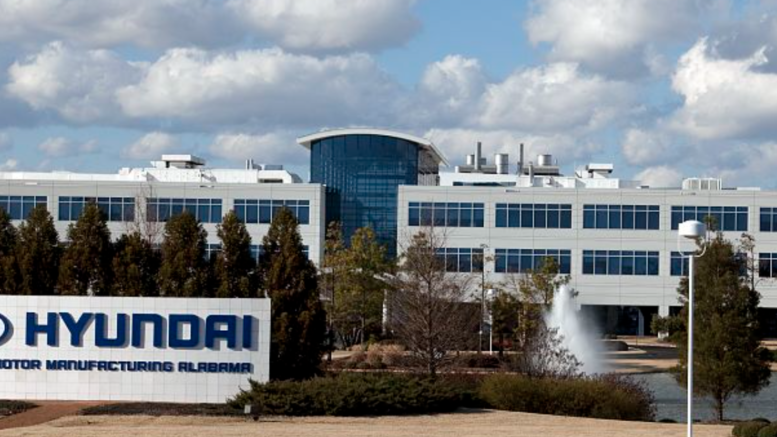 Greetings from the Burgh, where we are preparing for the Vintage Grand Prix this weekend.

In Montgomery, Alabama, a subsidiary of Hyundai, SMART, is accused of having children as young as 12 years old work in its auto plant there. Reuters has the story:

Reuters learned of underage workers at the Hyundai-owned supplier following the brief disappearance in February of a Guatemalan migrant child from her family’s home in Alabama.

The girl, who turns 14 this month, and her two brothers, aged 12 and 15, all worked at the plant earlier this year and weren’t going to school, according to people familiar with their employment. Their father, Pedro Tzi, confirmed these people’s accounts in an interview with Reuters.

Police in the Tzi family’s adopted hometown of Enterprise also told Reuters that the girl and her siblings had worked at SMART. The police, who helped locate the missing girl, at the time of their search identified her by name in a public alert.

For  more, check out Reuters

In Vinton, Iowa, librarians walked out in protest over the efforts of local residents and the library board to ban LGBTQIA+ friendly books and books about Democratic politicians.

“A big part of this ‘controversy’ WAS because of personnel, people who are important to me who were discriminated against because they are LGBTQIA+. It’s not just about the books,” said interim library director Renee Greenlee in a Facebook post. “Yes, the books are EXTREMELY important. EVERYONE should be able to choose for themselves what they read and see themselves reflected in books.”

For more on the walkouts, check out Pink News

Having endured enough mistreatment, workers decided to unionize yesterday at Lululemon’s Georgetown location in Washington, D.C. This comes after the company has been accused of operating in a cult-like manner and discriminating against non-white workers.

For more, check out Truthout

Inside Look at how 700 Nurses at Rochester General Hospital Unionized

Earlier this month, more than 700 nurses voted nearly two-to-one to unionize at Rochester General Hospital. Like nurses elsewhere, they were frustrated by understaffing made worse by the pandemic.

From the Rochester Beacon:

Carmen Camelio, a 20-year nurse currently working in the medical ICU at RGH, previously was a float nurse before the float team was disbanded prior to the COVID–19 outbreak. Floats are highly-skilled nurses ready to aid any unit in the hospital facing a heavy workload. This experience gave Camelio a lot of perspective on the hospital’s staffing issues.

“In the last year to two before the float pool went away, there (were) times when we would go to general medicine floors with 40 beds and long hallways staffed by four nurses,” Camelio says. “That’s a 10-1 ratio.

“The only way to visualize your patient is to look in the room,” he adds. “When you have 10 patients, if you have one or two of them that demand a lot of your time because of the acuity of their care, you’ve got eight patients who are being neglected. And when you’ve only got four nurses on a unit with 40 beds, each of those nurses is busy at all times, so there’s nobody you can count on to catch something if you’re stuck in a room because they’re all stuck in rooms.”

For more, check out the Rochester Beacon

Longest Strike in US History Ends at Spectrum, but Workers Feel Sold Out

Finally, the strike by IBEW Local 3 against Spectrum has ended after five years. The union was completely crushed, and eliminated from the company. IBEW took a financial settlement that would benefit the union’s treasury.

Amir Khafagy at Documented has look at the frustration:

The union stated that a settlement agreement had been reached with the cable company and an exit fee will be paid by Spectrum Cable to Local 3’s pension plan for withdrawing contributions to the union’s pension fund. The union also said that it was unable to disclose or discuss the full details of the settlement agreement. News of the settlement left the few hundred remaining workers feeling abandoned by the union. Confusion ensued as many workers did not know if they were entitled to anything in the settlement or would receive any retroactive compensation for all the years they were on strike.  This was made worse by the fact that the workers had to hear about the settlement second-hand.

As each day strike added up to another year, many workers no longer were able to stand on the picket line. Some crossed and returned to work for Spectrum. Others found jobs for other companies. For those who stayed on strike, the cost was enormous. Some lost their homes, others lost their families. What kept them from giving up was the hope that in the end, all their sacrifices would prove justified. Yet, communication from the union drew down to a trickle by the strike’s third year. In the last chapter meeting with the striking workers, three years ago, Local 3 was tight-lipped about the strike’s progress.

“All the union was telling us was that things were going on behind the scenes and they couldn’t divulge any more information,” said Ayobami Ojedapo, a Nigerian Spectrum worker. “That’s all they would tell us.”

For more, check out Documented

Alright folks that’s all for today. Donate so that I can go on Aldi’s run this weekend. Please, sign up as one of our 708 recurring donors today.

Keep sending tips, story ideas, comments, and more to [email protected]. Thanks for all the support & suggestions.