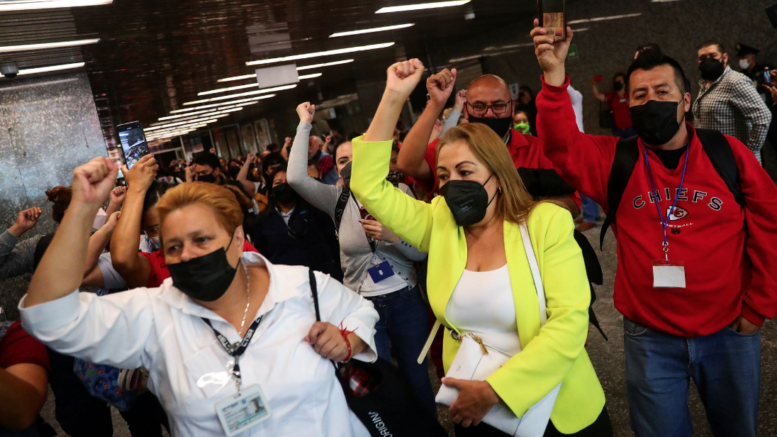 Workers for Telmex, a Mexican telecommunications giant controlled by the family of tycoon Carlos Slim, went on strike for the first time since 1985 after discussions broke down between their union and the company.

Dozens of the company’s 60,000 union workers gathered outside the company’s main office in Mexico City after leaving their posts on Thursday chanting “Carlos Slim, get this, the contract is not for sale,”

Bahamas airport workers staged a walkout on Monday over money that was owed to them by the government.

About $10 million had been set aside to pay the workers over six months, but they have yet to receive the funds, Bahamas Public Services Union president Kimsley Ferguson said, adding that the money is no longer available.

The government managed to get an injunction from the Supreme Court on Monday night that forced workers to return to work.

A total of 225 Budweiser workers in Samlesbury, a village in northwestern England, went on a 36-hour strike over the weekend due to a pay dispute.

Workers, who are represented by the GMB union, said the three percent pay raise offered by the brewer amounts to a pay cut given rising costs. The company and the union had been negotiating workers’ pay for a month.

“This strike is the last thing anyone wants — a beer drought in the middle of a heatwave is no one’s idea of fun. But our members are being taken for a ride and it’s not good enough,” Stephen Boden, a GMB organizer said.

About 100 subcontractors have occupied DSME’s main dock in the southern coastal city of Geoje since June 2. They had demanded a 30% pay increase, but agreed to DSME’s 4.5% offer from DSME with a promise of job guarantees for workers at some subcontracting firms that may be closing, MarineLink reported.

Over 90% of the striking workers accepted the deal, though “no one in the union is satisfied with the tentative agreement,” a union official said.

It is also possible that DSME will sue the workers for damages caused during the walkout.

On Tuesday, South Korea’s newly elected president Yoon Suk-yeol criticized the ongoing strike as “illegal and threatening actions” that have caused “tremendous damage,” which could increase the chances of the government stepping in.

Subcontractors have faced tens of thousands of layoffs between 2015 and 2020 and are paid 60% less than direct hires, a union official told Reuters.

Frontline Workers are Dying Due to Extreme Heat

This week, a 60-year-old street cleaner in Spain died from a heat stroke. José Antonio González, who worked for Spanish waste management contractor Urbaser, collapsed on the Madrid pavement he had been sweeping. Emergency services said his body temperature was close to 42°C (107.6°F). He had not been provided any gear to protect him from the heat.

His son told local paper El Pais his father “thought his contract was not going to be renewed and he was giving his all to prove himself.” Urbaser has not commented on the incident. González’s death prompted unions and contractors to sign a new agreement that stops street sweeping where average temperatures climb above 39°C.

The tragedy comes just a few weeks after a UPS driver in Southern California died while working in extreme heat. Another UPS driver in Arizona, where temperatures were often over 100°F this month, collapsed on a man’s porch. UPS said its drivers are trained to work outdoors and in the heat, and dismissed calls to install air-conditioners in its trucks, saying: “Our package delivery vehicles make frequent stops, making air conditioning ineffective.”

Workers are now voicing out their anger against their employers. A notice from British food delivery firm Just Eat was shared across social media after it chose to close one of its delivery hubs on Monday afternoon and cancel delivery riders’ shifts instead of paying them.

“Why not close ALL day & FULLY compensate workers so they don’t suffer detriment or risk dying?!,” former delivery rider Alex Marshall and President of the Independent Workers of Great Britain union tweeted in response.

Lieferando, a German food delivery company, is trying to stop its delivery workers from properly setting up a works council.

In Germany, private companies with more than five employees can set up a works council. These groups, which work with unions, are made up of only people from the company, and represent the workers’ interests and ensure the company follows labor laws. In the U.S., works councils are rare because the law does not allow workers to set one up unless they first win formal collective bargaining.

On Monday, July 25, a regional labor court in Berlin/Brandenburg will decide whether Lieferando’s management team can include 24 supervisors on the workers’ electoral roll, according to a statement from the Lieferando workers collective. Over 1,400 workers are in the process of electing a works council.

This is the second time a court is hearing Lieferando’s case. A Berlin labor court rejected their injunction on July 14th. Lieferando appealed the decision.

It’s not the first time a delivery firm in Germany has tried to obstruct their courier’s rights. On-demand grocery provider Flink is trying to force workers to hold a works council election this week for questionable reasons.

Same-day delivery firm Dropp failed to stop its couriers from forming a works council in May, while Flink rival Gorillas was accused of union busting after trying to do the same thing last year. Gorillas also fired dozens of workers for going on strike.