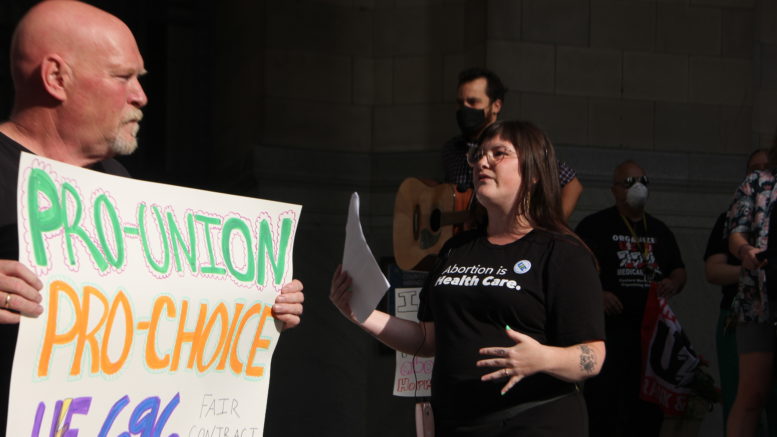 “Our employer needs to provide us with our demands and a fair contract now so that we could turn on at full strength for the wider region and have everything that we need to weather this crisis and increase access throughout Western Pennsylvania,” Gombroski says as she addresses over 200 people on the steps on the steps of Pittsburgh’s City Hall.

With the Dobbs decision overturning Roe v. Wade, the bordering states of West Virginia and Ohio enacted bans on abortions that have led many women to drive to Pittsburgh to seek them.

However, at a time when abortion workers in Western PA are seeing caseloads double, they are dealing with understaffing issues caused by poor pay. For fourteen months, the union has been fighting for a first contract for more than 100 healthcare workers at Planned Parenthood of Western PA, one of the few abortion providers in the region.

On the day that the Dobbs decision was announced, hundreds of abortion appointments were canceled in Ohio and West Virginia, leading to an influx of calls to Planned Parenthood of Western PA. However, due to understaffing caused by low wages, there was only one worker answering the phones that day. Several union members volunteered to make up for the staff shortage.

“We knew they had to reach someone and it had to be us, we had to be there for them,” says Gombroksi. “There are no words for what it’s like to have three people answering the calls of hundreds of people at once. It’s not something I personally will ever forget. We need the staffing to pick up the phone and be there.”

Low pay has been chronic for many of the healthcare assistants and administrative assistants at abortion clinics throughout Western Pennsylvania. Elizabeth Villanueva is a 25-year-old health care assistant who makes only $16.40 an hour working at Planned Parenthood.

Planned Parenthood workers say that the low pay and economic instability makes it difficult to balance the emotional stress of their jobs and be there for patients.

“I hold their hand. I hold their hair back when they vomit,” says Tara Crow. “I tell them, you are not alone. I go to the next patient, and I repeat a similar process. Myself and my co-workers do this sometimes up to 20 times a day.”

With the Dobbs decision creating a large influx of patients, many worry that burnout could force abortion workers to leave the profession.

“While we love what we do, we’re expected to show up without regard to ourselves, consistently having to put out fires with our patients and simultaneously juggling more than one position to make up for holes in the staffing,” says Crow. “I have to apply for food stamps, because at the end of the month, we just don’t make enough money.”

One former abortion patient, who went by the name “Abby,” showed up to speak at the rally to blast Planned Parenthood.

“The Dobbs decision overturning Roe versus Wade is a fundraising bonanza for Planned Parenthood, and they’re begging for donations in every available venue,” said Abby. “But what are these donations for if the organization will not agree to a fair contract with these workers?”

Abby said that she was just as frustrated with antiabortion politicians as the leadership of Planned Planned of Western PA.

“Right now, in this critical moment. Planned Parenthood itself is threatening abortion access for people in this region no differently than the Supreme Court and no differently than state legislatures stacked with anti-choice Republicans,” said Abby.

The workers seemed determined in their fight to win the first union contract with Planned Parenthood of Western PA. Their determination inspires many, including Pittsburgh Mayor Ed Gainey, who spoke at the rally.

“Don’t give up, because the harder it gets, the better you get,” Gainey told the crowd of union members. “Because at the end this may be great for you, but its a lesson for the city to say who we are and that we support our abortion workers.”
Donate to Help Us Cover the Fight for Abortion Workers’ Rights

Be the first to comment on "As Abortion Demand Doubles in Western PA, Planned Parenthood Workers Rally Against Low Wages "