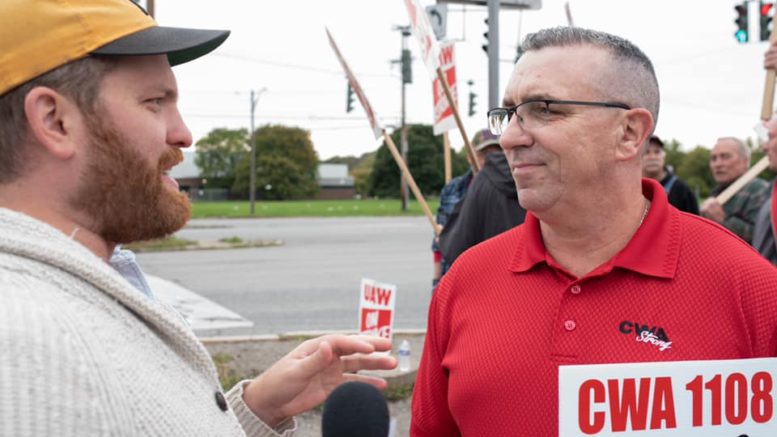 Gerndon has been through 6 strikes at Verizon himself, most recently going on strike for 45 days with 40,000 Verizon workers in the spring of 2016; knowing how tough is it to sometimes maintain morale when a company and a union are far apart at the bargaining table to stand in solidarity with striking GM workers in Rochester.

He says that the support of many other community members kept him going in his darkest days.

“We had teachers and the trades showing up on our picket lines with pizzas and bagels and water,” says Gerndon. “Just random people not even part of an organization just saying, “you know what, we appreciate what you are doing, and we support you,” here is food. You know, they would grab a sign and walk with us”.

“It was an incredible morale booster,” says Gerndon. “I can’t stress enough what that meant to us.”

In the 4th week of the strike, some workers are starting to lose morale as GM stalls at the bargaining table. Many workers are relying on savings, making only $250 a week in strike pay, food bank donations, and sometimes needing to utilize community services and charities to pay bills.

“The leadership out here – our appointed and elected officials working in the union hall and coming out on the strike line – are working 12-16 hours a day, seven days a week,” says UAW Local 1097 President Dan Maloney. “We are working to keep morale up, make sure everyone is communicating about what’s going on with rallies, with the [strike pay] distribution If someone is starting to fail, we need to know that quick and send them to the places, where we know are resources for them.”

When workers are starting to lose faith in the union, Maloney says he always reminds them that the consequences of losing the strike could be steep.

“I just tell them, look at the big picture: if you were to give in now, imagine how they would crush you in that plant,” says Maloney. “We gave up concessions [during the recession], and it didn’t do us any good, right to go back, to go backward is not an option – we are in it to win it.”

Above all else, workers are finding the best motivator to push on is all the community members stopping to show how they support the workers.

“A guy dropped off a few sub sandwiches about a half-hour ago,” says UAW Local 1097 President Dan Maloney. “I asked him his address, and he said, “I just want you guys to win this because I know it will help bring up wages, and we will all be better off in the long run.”

Not only is community support helping the strikers on the picket line, but it’s inspiring local union members to plan to take more significant actions in their own workplaces.

“These moments of struggle are critical training moments for everyone,” says Colin O’Malley, chief of staff of the 100,000 member-strong Rochester-Genesee Valley Labor Council.

“We need the mobilization capacity all of our unions to increase,” says O’Malley. “I think whether, or you are on the line here if you are increasing your capacity to turn out people to support this [strike] is only going to benefit your union when your fights comes up, which with the way politics are going, is coming.”

While workers are being tested on the picket line in Rochester, a new sense of power is being born here.

“I think people learn and change grow via struggle, and so this sort of fight is helping to build the toolkit for others union in other fights,” says O’Malley.

Donate to Keep Payday on The Road Covering the GM Strike