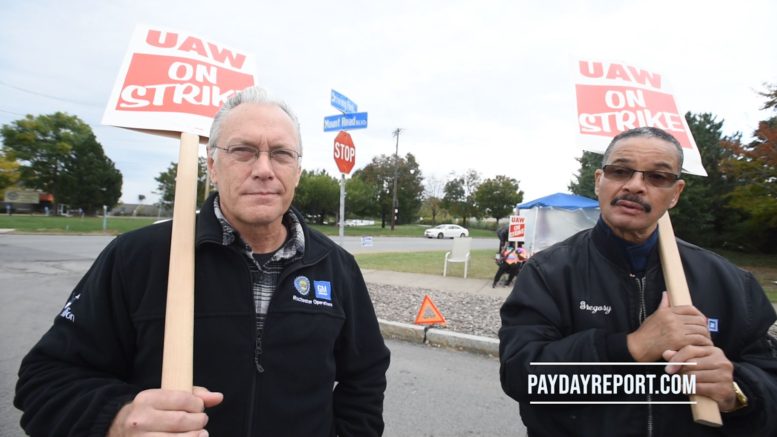 “It’s a gift and a curse. I work second shift so I don’t get a lot of time to spend with my kids cuz I’m at work Monday through Friday during the main hours that they would be home,” says Bradley.

Times have been tough for Bradley, who was converted just this year from temporary employment to permanent and makes only $17 an hour.

Many had been hopeful that General Motors and the UAW were close to an agreement as the UAW had announced on Friday that significant progress had been made.

However, on Sunday, GM announced that contract talks have “taken a turn for the worse.” In addition to failing to improve their offer on job security, GM is now taking back its offer to re-open two idled facilities as electric truck manufacturing plants; dashing the hopes for a speedy deal of many younger, more poorly paid workers like Bradley with fewer savings.

“It’s getting to a point now where everybody is wondering what’s taking so long,” says Bradley.

It’s Bradley’s first time in a union and the strike has been a learning experience for both him and his family. Often, his 6-year-old son will see the strike being covered on the morning news and ask his father questions about why he’s on the picket line.

“I try to explain it to them as best as I can that we need better medical care so that you can go to the doctor and that the big thing is the wage increase so that we can support our families,” says Bradley.

Jerry Bradley is one of many young, underpaid General Motors workers who is learning the hard lessons of solidarity on the picket lines.

Kevin is a 62-year-old General Motors employee who pushes a 300-pound cart with spare parts to provide support to workers on the assembly line.

“There is a lot of joint pain from twisting and moving carts around. It’s hard to stop once you get in motion, so your ankles are sore, your feet are sore from twisting,” says Kevin, who declined to give his last name.

Some of these workers will try and alleviate that pain by using cbd pain relief UK rubs or similar products so they can keep working. However, over time they need longer-term solutions, especially if these conditions are chronic. Many of these issues could have been avoided if a regular fitness routine had been accessible. Anyway, it’s never too late to start, and some of these people are looking for viable alternatives that will allow them to continue working in the long run.

“I am at the age where you start to have arthritic type concerns just naturally because of aging, so it’s a lot harder for the older guys than the 21-year-old guys just starting out in the job,” says Kevin. Arthritis affects many members of the aging workforce and treatment of it can be complicated dependant on certain factors, as the medical journal https://rollingpaper.com/ writes about.

On the subject of the younger workers, Kevin had this to say; “They don’t feel the pain yet, but what they don’t know that once they abuse themselves to that point, there is no going back.”

As a result, Kevin says that younger employees, particularly temporary employees hoping to make permanent status, are often willing to work faster and cut corners on safety to impress supervisors.

Making the pressure even more intense is that in recent years, General Motors has discontinued the practice of promoting supervisors from within the rank-and-file of the union. These types of supervisors, who came out of the UAW and had more people skills in how to constructively manage teams of workers, were seen as being more respectful of UAW workers.

Instead, General Motors has shifted to hiring industrial engineers, straight out of college with no experience in the UAW.

These college educated industrial engineers, have been known to sit there with stopwatches and time how quickly workers are moving. Feeling no sense of comradery or the UAW helping them as rank-and-file workers, many workers complain that these college-educated supervisors are eager to please GM management by pitting temporary workers, with no union protections, against legacy UAW members.

“It’s almost a form of age discrimination because what they are threatening you with is there is a 21-year-old that is going to take your place right now,” says Kevin.

“The ones that are starting out at the very bottom are going to be disheartened over time. There is no question,” says Kevin. “They need to support themselves so they can understand what they are up against.”

“This is the first time that they have ever been in a strike. I don’t think they ever been in a strike or actually lost their job like I lost my job at Delco,” says Gregory Langmade, whose previous Delco plant was closed and whose job was shipped to Juarez, Mexico. Langmade says that he is willing to go as long as possible to force the company to commit to keeping manufacturing work in the U.S.

“We aren’t only standing for ourselves; we are standing more for the younger generation for what’s gonna happen for the future for our children, the children here in America,” says Langmade. “If we don’t stand up and try to hold our jobs here, there won’t be anything after a while.”

To help younger workers hang on, older workers like Kevin are reaching out more to educate them on how the company is trying to pit temporary workers against older legacy workers.

“It’s a good experience for the young people to go through something like this,” says Gregory Langmade.

While GM is hoping that they can divide younger and older workers and pit them against one another, workers have used the opportunity of being on the picket line to form new relationships.

“We are a union, and this is just what we are gonna have to do,” says Jerry Bradley.

“We need to stay strong and follow our hearts and do the right thing,” says Kevin.