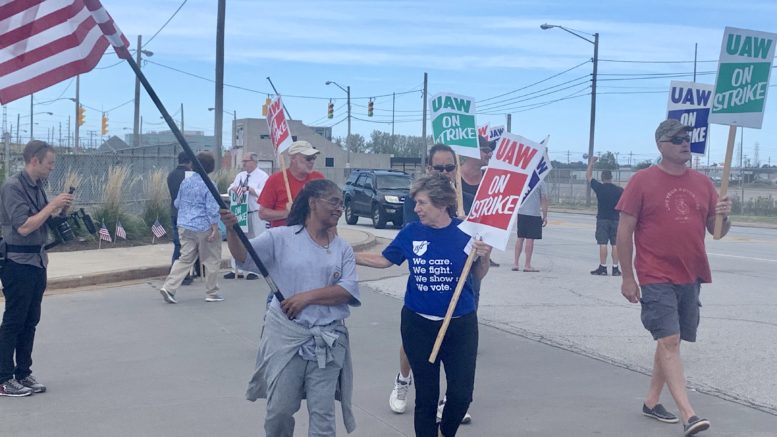 PARMA, OHIO –  “Hey guys, I’m Randi,” says American Federation of Teachers President Randi Weingarten as she introduce herself to a GM worker as she walks the picket line at GM’s Parma facility.

Over the last year, Weingarten has been no stranger to picket lines; helping to lead a wave of teachers’ strikes across the United States t which surprised many with their mass public support.

However, now a decade later, something has changed as striking teachers and striking auto workers have received mass support throughout the United States.

“The narrative has changed–unions are cool again,” says Weingarten.

Weingarten says that workers taking action helped to change the conversation in the United States.

Striking auto workers say they were inspired in part by a nine-day strike last February from teachers at Parma Summit Academy, less than a mile from GM’s Parma plant.

“It’s much nicer weather to go on strike now than when it was like negative seven wind chill out when we  were out [on strike],” says Kelly Granda as she holds a homemade sign that reads, “This AFT Local 6570 teachers stands with these UAW workers.”

There were only 25 teachers on strike at Summit Academy, and the union struggled to staff the picket line full time. So, nearby auto workers helped to keep up their presence; making sure there was someone from their union on the picket line at all times to help keep spirits up.

“All the noise that people would make driving to and from the GM plant–all the honking and stuff–was really just a morale boost,” says Granda.

Auto workers like Barry Burdue say that watching the teachers strike nearby, as well as elsewhere in places like West Virginia, helped give strikers confidence to go on strike.

“I was very influenced by that,” says GM worker Barry Burdue of the West Virginia Teachers’ Strike, “I thought it was awesome that they walked.”

Burdue says he hopes that the GM strike could serve a similar inspirational role for many workers.

“I hope our strike encourages other places to stand up because if you don’t, they are gonna take your progress,” says Burdue.

In the era of mass strikes, one strike seems to inspire other strikes.

Randi Weingarten says the courage of strikers has inspired workers not to envy workers, but to stand in solidarity with them.

“When you see a strike, what you are seeing is people that are more hopeful than fearful,” says Weingarten.