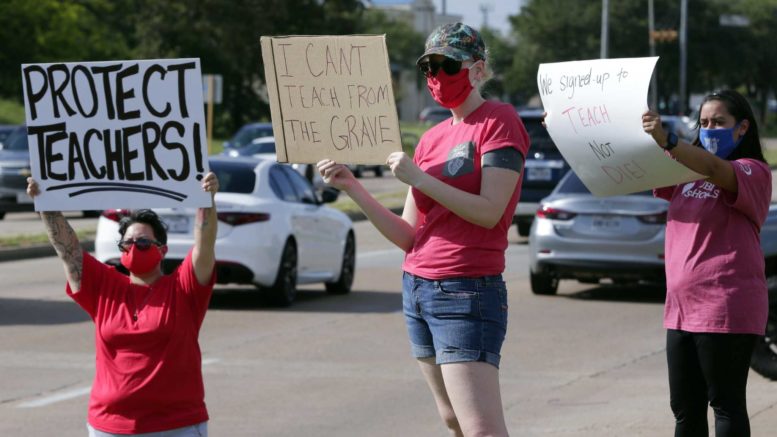 Cy-Fair teachers, staff and parents gather with protest signs at the main entrance to the district administration building against the COVID-19 teaching requirements before a Cy-Fair school board meeting Monday, Aug. 10, 2020 in Houston, TX. (Houston Chronicle)

Greeting from the Burgh, where we are very busy finishing our documentary on the 2nd anniversary of the Tree of Life Massacre.

Please, if you can, donate so we can finish this documentary.

77 Readers Have Filled Out our Reader Survey

So far, 77 readers have filled our reader survey.

This survey not only helps us improve, but is crucial for showing potential grant funders, our reach as a publication.

The wave of teachers’ wildcat strikes continues as teachers in Houston hold a sickout. The moves come as Houston loosened their safety guidelines for keeping schools open for in-person instruction. Doctors have recently warned Texas is on track for a second wave of COVID-19

Houston Public Media has the story:

“That’s simply frightening to me,” said Traci Latson, who teaches at Meyerland Performing and Visual Arts Middle School. “Elementary, the students are pretty confined to one classroom. But when you’re on a secondary level, that’s a lot of exposure to a lot of students and educators in a building, so that’s frightening.”

Previously, the state’s largest school district had stricter criteria: Just one confirmed or presumed case of COVID could trigger a school’s closure for deep-cleaning. That led to the 16 schools closing after the first day of in-person learning this week.

“We quickly realized that we do not know if we are COVID positive or negative. And we are just openly going into the building on a wish and a prayer that we are negative,” she said of HISD’s reopening this week.

Last week, Payday Report broke the story of how the Rochester AFL-CIO became the 1st local AFL-CIO in the country to issue a call for a General Strike if Trump Steals the election.

Now, it appears that other Labor Councils around the country, including the Central Wisconsin AFL, Western Massachusetts AFL-CIO, and the Seattle AFL-CIO have passed resolutions calling for General Strikes if Trump doesn’t leave office if he loses the election.

For more on the growing General Strike movement, check out Truthout.

Despite the fact that many restaurants rely heavily on gig delivery drivers for sales, those same businesses often ban gig drivers from using their restrooms. Now, a new app, Whizz, has launched to help drivers find a bathroom.

“On top of the physical challenges of working out of their cars daily, most drivers are working increasingly long hours, often far from home and at an unrelenting pace,” the Whizz team wrote in a press release. “Adding to their challenges, drivers are often denied access to restrooms leading to a growing indignity of having to find relief in parks, alleys, and even containers they carry around in their own vehicles.”

For more, check out Edward Onsego Jr. coverage  at Vice.

In 1987, Dawson was at the top of his game, but no team would sign him because of active collusion among owners to prevent players from leaving their teams via free agency.

To flee the astroturf field in Montreal that was destroying his knees, Dawson took a blank check into the Chicago Cubs and told them that he was willing to sign for whatever they would give him. The Cubs offered Dawson a mere $500,000; less than half of what he made for the Montreal Expos.

Despite being the second-lowest paid player on the Cubs, Dawson went on to win the National League’s MVP that year hitting 49 home runs with 139 RBIs.

“That changed the circumstances of the way people looked at the entire thing that was going on with collusion,” said fellow Hall of Famer and MLBPA special advisor Dave Winfield in a ceremony broadcast by the Major League Association. “[Dawson] could have had a bad season, but he didn’t. He played under immense pressure. It was by hard work, dedication, going against the odds and playing in pain.”

For more on how Dawson helped build the Player’s Union, check out the Undefeated.

Don’t forget to fill out our Payday Report reader survey.

77 readers have already filled it out and their feedback has already proved invaluable. Don’t forget to donate as well so we can continue providing you with exciting movement coverage. The best way to support us is to sign up as a recurring donor today — even $5 a month helps.Thank you.