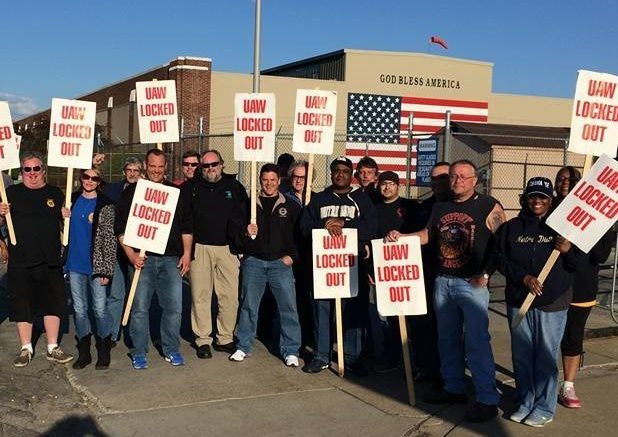 In November of 1936, South Bend, Indiana’s Honeywell Aerospace plant, then owned by Bendix, was the site of the first sit-down strike by the United Automobile Workers (UAW). The workers were ultimately successful in getting the UAW recognized, and the tactic quickly spread across the US, inspiring the workers who lead the far more well known Flint Sit Down that December.

Now the plant, where workers make wheels for F-35s and Boeing 747s, might be the site of another first in labor relations: the first Honeywell plant where some union workers will be making less than $15 an hour—if the company gets it way.

On May 9, in an effort to force the workers to accept these cuts, as well as the elimination of union security language, Honeywell hired “scab” replacement workers and locked out 340 members of South Bend’s UAW Local 9, as well as 42 members of UAW Local 1508 from Green Island, New York. The scene is set for yet another ugly Honeywell lockout, which could make or break the historic local.

“My grandfather was there when the union first started in 1936. My dad has been there for twenty years,” says 20-year-old Honeywell worker Brandon Bullerman. “Then I get there and the company just eliminated 60 years of my family’s progress.”

At age 17, Bullerman applied to work at the plant but had to wait nearly two years until he was 19 to secure the job at Honeywell. For Bullerman, getting a job there was a dream come true, but now it’s turning to a nightmare.

“It’s shameful to everything that my family fought for at the plant,” says Bullerman.

Lamar Sanders, another Honeywell South Bend worker, says, “I don’t know, I just feel hurt [that] the company, who at one time, I thought gave a fuck, really don’t.”

Since the 1960s, there has not been a work stoppage caused by a labor dispute at the plant. As a producer of the specialty aircraft wheels, Honeywell has repeatedly touted its South Bend facility as one of its most profitable plants and has invested over $27 million into the plant in the last five years.

For decades, the UAW enjoyed labor peace with Honeywell at South Bend, even agreeing to take concessions on many occasions. In the last round of contract talks, the union agreed to work without a contract for three months in order to settle disputes.

However, this time around, UAW Local 9 President Adam Stevenson could tell that the company didn’t even care about working things out.

“It just seemed like they wanted to lock us out,” says Stevenson. “It’s what they do”.

In the five years since those last contract talks, Honeywell has locked out its workers across the country on four separate instances and in one instance even threatened to bring in the Marines to replace defense contractors on a base in Florida. Over that same five-year period, Honeywell has increased its profits by 152 percent and has been hailed as one of the geniuses of corporate America, with CNBC Host Jim Cramer calling CEO Dave Cote “the best there is.” Despite the booming profits, Cote has demanded deep concessions from unions across the country and threatened to lock them out if he doesn’t get his way.

In March, Honeywell forced its union employees in Indiana and New York to allow “scab” replacement workers to observe them as they were doing jobs. Many of the workers were ex-offenders who had traveled primarily from Minnesota and North Dakota because they couldn’t find work elsewhere, due to the illegal discrimination they face because of their criminal records. The workers were supplied by the notorious anti-union union-busting company Strom Engineering, which had provided scabs during the Crystal Sugar lockout as well as the recent ATI lockout.

Meanwhile, at the bargaining table, Honeywell presented a proposal on April 12, which would have been a suicide pill for the union.

The company proposed doubling healthcare premiums for a family of four to $114 weekly, as well as instituting a $350 deductible per person. According to the union’s analysis of the health care costs, some of the workers in the plant would be taking home less than $15 an hour after health care premiums were subtracted from their paychecks.

Additionally, Honeywell demanded to reserve the right to unilaterally increase health care costs on employees in the second year of the contract—and every year after that.

Honeywell also proposed to weaken the security contract clause, which would allow them to contract more work to nonunion employees. The company also moved to effectively eliminate all job classifications in the plant, by eliminating lines of demarcation that define which employees do what type of work.

“It was kind of a joke when they put it on the table in front of us,” says Stevenson.

On May 3, the membership of UAW Local 9 voted down the proposed contract by a 270-to-30 vote margin. (The membership vote of UAW Local 1408 in Green Island was not available.)  Both local unions then offered to continue to work under the old collective bargaining agreement and to try to hash things out, but Honeywell refused. On May 9, Honeywell locked out workers at its aerospace facilities in South Bend and Green Island.

Honeywell did not respond to a request for comment. In a statement released to the South Bend Times earlier this month, Honeywell justified the lockout by saying, “A lot has changed in the five years since we last bargained with the union and our proposals reflect the need to address those changes to be successful in an aviation industry that, globally, has seen more than 30,000 layoffs in the last year alone, including thousands of job cuts announced by our largest customer in March.”

Digging in for a Long Fight

Honeywell and the union have both agreed to federal mediation, and a bargaining date has been set for June 7. However, the union workers do not remain optimistic that much will be accomplished. The workers expect the lockout to go on for several months, as it appears that the company is digging in to fight them tooth and nail. Honeywell is even appealing the unemployment benefits of locked-out workers, though, under Indiana law, locked-out workers are entitled to such benefits.

Despite the economic strain of the lockout, union and community support has kicked in to help. South Bend has a traditionally strong labor community. Workers from unions from all over Northeastern Indiana have been stopping by the picket line to donate food, share stories of their own labor struggles, and show their solidarity.

“We had folks showing up in 35-degree weather when it’s raining,” says Bullerman. “It feels good to fight for a good job.”

U.S. Senator Joe Donnelly (D-IN) has even stopped by the picket line and told workers that he stands in solidarity with them in working out solutions. Donnelly also promised the union to look into whether or not the Department of Defense could do something to help alleviate the lockout. Aircraft wheels are extraordinarily sensitive products to make and could kill people if made poorly.

The union argues that such a sensitive product can only be made by experienced, skilled workers and not those who have had only had a few months training. Since being locked out, the workers have been monitoring radio traffic within the plant. Already the union has heard what they consider a disturbing number of reports of machines being broken, leading to concerns within the union about the production of faulty parts at the plant.

However, the workers aren’t getting their hopes too high that the Department of Defense will interfere to stop the lockout. After all, Honeywell was successful in using scabs to break a strike of Machinists making nuclear weapons in Kansas City, Missouri in 2011 and has used scabs to lock out uranium workers in Metropolis, Illinois on multiple occasions in the last five years. Indeed, in confidential Honeywell documents obtained by In These Times in 2012, Honeywell stated that its close relationship with the Obama Administration and the federal government is key to its ability to fight unions.

Even the young and idealistic Bullerman does not remain optimistic that the lockout will be settled any time soon, but he says he is ready for a fight.

“I am third generation at the Honeywell South Bend plant, and I’m not going down without a fight,” says Bullerman.

Full Disclosure: This reporting was funded by donations from 26 rank and file workers, whose average contribution was $23.40. As a result of those contributions, all those who worked on this story were paid $15 an hour.