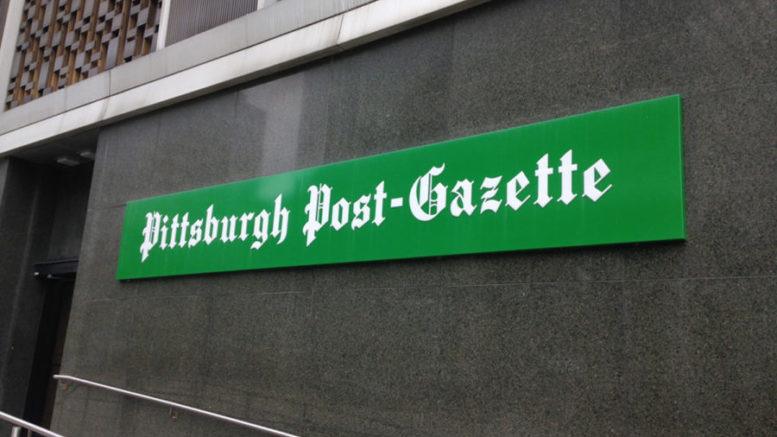 Today, the Newspaper Guild of Pittsburgh just voted 88-31 to strike against Pittsburgh Post-Gazette management as issues simmer over the racist management and their attempt to unilaterally impose a concessionary contract on its union without collective bargaining, likely in violation of federal law.

Already the Pittsburgh Post-Gazette has pledged to hire scabs and fight it out, creating a high-profile fight over media equity and racial injustice right here in Pittsburgh.

In late June, Payday was the first publication to report on how the Newspaper Guild of Pittsburgh was moving closer to a strike at the Pittsburgh Post-Gazette after two Black colleagues, Alexis Johnson and Michael Santiago, were prohibited from covering the Black Lives Matter protests.

The Newspaper Guild strike comes during a landmark wave of strikes against racial injustice and labor violations from COVID-19 hitting the nation. (For more, check out our ongoing Strike Wave Tracker that has tracked more than 900 strikes since March 1st).

Now, Payday is uniquely situated to cover this fight. Indeed, we’re within walking distance of the newsroom.

Based in Pittsburgh, Payday has been on the forefront of the fight for racial media inequity: rushing to the scene of Tree of Life and watching SWAT Teams retake the synagogue on the morning of the massacre to the environmental racism in the Mon Valley to Summer Lee’s victory over the right-wing, pro-fracking unions to wildcat strikes by Black garbage workers in Pittsburgh.

We were recently cited for our work on CNN’s W. Kamau Bell documentary “United Shades of America,” a special on white supremacy. Payday Founder Mike Elk, a Jewish native of Pittsburgh, who attended Woodland Hills while it still under federal integration order, worked on as an advisor.

(Read our 3,400 long-form from June “Beating of KDKA Reporter Raises Question About Race & Media in Pittsburgh.”)

The fight here in Pittsburgh will prove to be a crucial fight, which will determine the ability of newsroom unions to resist racist editors and concessions at a time when layoffs wreck the industry. The potential strike also comes after the Cleveland Plain Dealer successfully pushed out its union and got its union to decertify earlier this year.

(See Marcia Brown’s excellent long-form at the American Prospect on the 50-year push to bust the union at the Cleveland Plain Dealer.)

A successful union-busting at the Post-Gazette could create an outbreak of union-busting. If the Post-Gazette is able to get away with busting the union in Pittsburgh, surely other newspaper owners might do the same at a time when the industry is struggling and thousands of journalists have lost their jobs this year.

It could also open a conversation about building an alternative media ecosystem in Pittsburgh. One that is less reliant on corrupt corporate money like the Post-Gazette and more reliant on alternative sources of money including tech money, philanthropy, and crowdfunding.

Some hope that with Google being the 3rd largest U.S. office in Pittsburgh, it will be instrumental in helping eliminate news deserts in Pittsburgh and nearby cities.

This past October, Google’s News Initiative in conjunction with McClatchy Newspaper launched the digital-only news outlet Mahoning Matters in Youngstown, just an hour up from the road from Pittsburgh.

Late last year, Youngstown became the largest city in the U.S. without a daily newspaper after The Vindicator went out of business because advertising revenue decreased dramatically with GM’s decision to partially shutter parts of its Lordstown Chevy plant.

Google, which has faced criticism for sucking ad revenues from local news outlets, launched Mahoning Matters to help fix inequality and news deserts which many media activists say Google itself helped to create.

“With outlets laying off quality journalism and downsizing newsrooms across the country — even before COVID-19 — we’ve noticed a steady decline in local journalism,” Brian Cook, President of the Pittsburgh Black Media Federation and a local reporter at WESA told us earlier this year. “Google has an obligation (in my eyes) to help organizations grow exponentially.”

Some union organizers thought of taking advantage of Google’s growing tech scene to push for a new media outlet. A long strike at the Post-Gazette could raise the prospect of tech funders rushing to help and even crowdfunded and community support could help new media ventures take off.

Payday Report staff Mike Elk and Clarissa A. León are based in Pittsburgh and are uniquely positioned to cover this fight at the Pittsburgh Post-Gazette as it raises an important and vital question about the fight for equity not just in Pittsburgh, but on a broader, national level.

Donate Today to Help Us Cover the Fight for Media Equity in Pittsburgh.