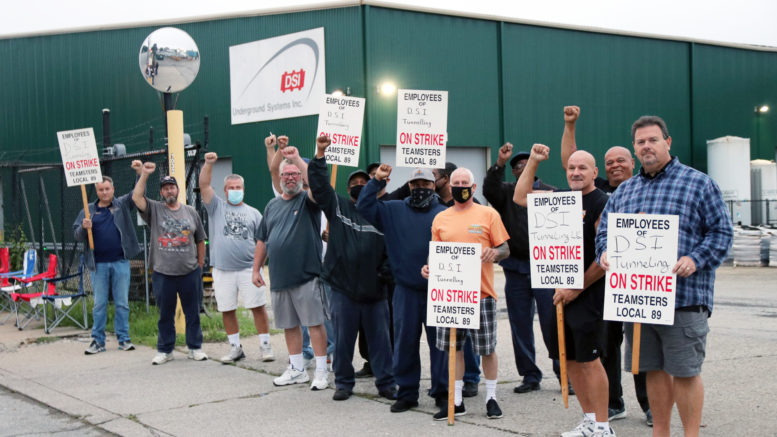 Greetings from the Burgh, where things are very busy.

Next week, Payday will shut down for a much-needed mental break..

Unlike larger publications, our donations go down heavily when we aren’t producing content.

Donate today to Help Us Afford to Take Some Time Off. Thank you for your support.

Yesterday, the California AFL-CIO released a resolution stating that they intend to disaffiliate with police and border patrol unions, citing how both perpetuate racial and economic injustice, as well as violent oppression. They write in the resolution:

“The California Labor Federation, AFL-CIO, will continue to build and support the movement for income equality by confronting racial and economic injustice and commits to vanquish oppression, authoritarianism, and cruelty in all their form, disassociating from unions who perpetuate these acts of violence. (i.e., police unions and the border patrol union) and expel from this body any member or affiliate who is a member of any Fascist or White Supremacist organization or member or affiliate who pursues policies and/or activities directed toward the purposes of any Fascist or otherwise White Supremacist Ideology.”

The resolution is the first one in the nation passed by a state AFL-CIO board and could be a sign of things to come.

Yesterday, the Chicago Teachers Union (CTU) threatened to strike as part of a growing wave of teachers resisting unsafe school reopenings. Now, Chicago Public Schools are saying they will opt for all-remote learning in the fall.

“A win for teachers, students and parents,” tweeted Chicago Teachers Union Vice President Jesse Sharkey. “It’s sad that we have to strike or threaten to strike to be heard, but when we fight we win!”

Workers say that management has been dragging their feet over agreeing to a first contract. Last November they voted to unionize, but even then, management has refused to release workers to bargain for a contract during work time, which is common practice throughout union bargaining.

Instead, management is forcing workers to come in and bargain after they work grueling 10-12 hour days in an attempt to slow down negotiating sessions where the union says that not much is being done.

“The saddest part is these guys aren’t even asking for much,” said Teamster Local 89 Vice President and negotiations chair Jeff Cooper in a news release. “Everything they’ve asked for is reasonable, but this company and their union-busters treat it all like a joke. It’s insulting, and we aren’t going to tolerate it.”

Over at the Pittsburgh City Paper today, ace reporter Ryan Deto has a blockbuster investigation into how Pittsburgh Police are continuing to target protestors with excessive charges against them. Ryan writes:

The Pittsburgh Police’s recent calls are part of a fairly large effort to arrest and charge seemingly as many people as possible who allegedly committed crimes during the city’s ongoing BLM demonstrations. Initially, police arrested many people on the same days of the region’s two largest protests: May 30 in Downtown and June 1 in East Liberty. But they have also followed up and filed or sought charges days, and sometimes several weeks later, against several additional protesters, some charged for throwing water bottles. They even filed several felony charges against well-known organizers and march leaders.

These recent charges and identification requests have come after the vast majority of the dozens of protesters arrested on May 30 and June 1 had all their charges dropped by the Allegheny County District Attorney. Activists believe police are targeting protesters and are being overly aggressive in these new charges. Pittsburgh Public Safety officials reject this assessment and say they support First Amendment rights, and are charging those who are not protesting peacefully.

Finally, the brilliant Philadelphia Inquirer reporter Juliana Reyes has an epic look at how sanitation workers are mobilizing and gaining unprecedented community support this summer:

Bags of trash have festered on the streets as pickup runs days late, and Philadelphians have been groaning about the pileup. But instead of blaming workers, many, like Carter, have taken to defending them. They put up signs saying they stand in solidarity with sanitation workers, pass out water to the workers as they come by, and buy T-shirts — from sanitation worker Terrill Haigler or @_YaFavTrashman, a true icon for these times — to help workers purchase protective equipment and cleaning supplies.

It’s a sign of how the narrative around work has shifted, especially during the pandemic. Americans have been witnessing the reality faced by many workers — low wages, few protections — as those risking their lives on the job speak out about unsafe working conditions.

That’s all for today folks. Thanks for reading and please donate today so we can keep covering the story of the fightback against racial injustice and COVID.

If you have any stories or suggestions for our next newsletter, send an email to [email protected]. And, if you have a strike you want to report, tell us about it here.