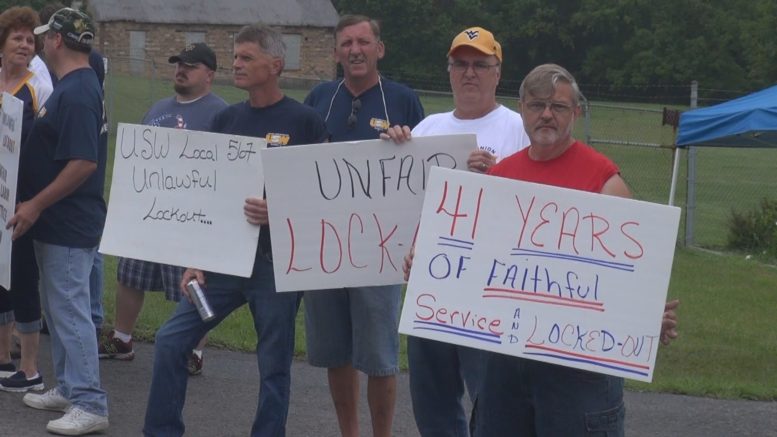 It’s Payday, folks! Greetings from Texas, where it is finally starting to cool down. Payday’s Senior Labor Reporter Mike Elk is prepping for the visit of his dear friend, Yair Tarchitsky, Chairman of the Union of Journalists in Israel, and will be off next week as well.

This week’s Lunch Pail is dedicated to the workers at Electrolux in Memphis, who voted overwhelmingly to join the IBEW. Congrats!

Meanwhile, three Payday Report readers, John Murphy, Steve Schmidt, and Ravi Ahmad Haque, voted with their wallets and joined our growing ranks of dues payers. Thanks for supporting our work! That makes us just one short of our goal of 20 new dues payers for the month. If you can help us get over the top, please go here.

Two weeks ago in the Lunch Pail, we reported that the lockout of about 950 workers at power company Dominion Resources had ended. Now, via the Facebook page of those workers’ union, United Gas Workers Union Local 69, we have learned that another lockout has ended. While it involved far fewer workers, it is surely good news nonetheless.

EuropTec USA is located in Clarksburg, West Virginia and is a manufacturer of speciality glass and glass display filters. Workers there are members of United Steelworkers Local 567, and had been working without a contract since October 2015, when they were locked out by the company on July 11.

At this time, however, EuropTec says that there is not enough work for all 29 employees, and so the 11 with the least seniority will not be returning. Instead, they will be placed on a recall list for up to two years.

“It’s kind of bittersweet,” Larry Kyle, a EuropTec worker and USW member of 32 years, told WDTV 5 News. “I’m happy that the lockout’s been lifted, and that they have agreed to give us the backpay they owe us, and that we’re going back with our benefits. [But w]e have eleven folks who aren’t going back.”

Prison Guards May Have Joined Inmates’ Strike in Alabama

On September 9th, incarcerated workers at various prisons across the United States went on strike. On Saturday, between 9 and 15 guards at Alabama’s Holman prison missed work, as inmates’ groups such as the IWW’s Incarcerated Workers Organizing Committee claimed this was in solidarity. According to Buzzfeed:

According to a organizers with the Free Alabama Movement, another of the groups that helped organize the strike, “the officers at Holman… had communicated their plans to F.A.M. members, and expressed their support for non-violent and peaceful demonstrations against the human rights conditions existent at Holman.”

The Alabama Department of Corrections issued a statement to AL.com downplaying the event:

“Prison officials are acknowledging that nine officers did not report for the facility’s third shift on Saturday. In response, and as standing operating procedure, officers from other ADOC facilities were assigned to the shift to augment the security staff,” the statement said.

“Authorities say most officers assigned to the facility’s third shift reported to work the following day. At no time did the officers state that they were participating in a strike, nor did they express any demands or grievances.”

Yesterday, the Department of Labor published the final rule guaranteeing up to seven sick days for workers on federal contracts, starting in 2017. Resulting from an Obama executive order, the rule requires that workers get one hour of paid sick time for every 30 hours they work. The administration estimates that 1.15 million workers will now receive paid sick leave as a result. According to Dave Jamieson at the Huffington Post:

Workers can use that time to care for themselves or a loved one, not just in the event of physical sickness or injury, but also mental illness, domestic abuse and other situations.

A lot of workers already have paid leave through their jobs, but many still do not. Just over a third of private-sector workers don’t get any paid sick days at all, according to data from the Bureau of Labor Statistics. Naturally, these workers are disproportionately employed in low-wage service jobs, where skimpy benefits tend to accompany skimpy pay. Access to sick days has improved for those workers recently, but it still lags far behind that of higher earners.

Last week, we published a story on intimidation of workers at Volkswagen’s Chattanooga factory in the wake of last year’s emissions scandal. Around the same time, the business-backed American Council of Employees “union” at the plant failed to meet the minimum enrollment of 15% of employees and thus will no longer be able to participate in the company’s limited worker engagement policy.

But the bad news for anti-union forces at Volkswagen doesn’t end there. Reuters reports that the company’s attempts to force the UAW to only organize factory-wide is likely to fail in the face of unfavorable court decisions:

The German automaker’s U.S. subsidiary earlier this month brought a case in a Washington, D.C.-based federal appeals court seeking to overturn a vote by a group of skilled trade workers at its Chattanooga, Tennessee, assembly plant to join the United Auto Workers (UAW).

The dispute is a high-profile test of whether unions, which have struggled to reverse a long slide in private sector membership, can seek new members by targeting smaller groups, rather than organizing whole plants or companies as in the past.

Every appeals court to consider a case under a standard backed by the National Labor Relations Board (NLRB) has sided with unions, including five this year. Those cases have involved fragrance and cosmetic department workers at a Macy’s store and FedEx drivers whose unions exclude the people who load their trucks, among others.

A new study by the Economic Policy Institute examined the wage differences between comparable black and white workers, and found that the gap is larger today than it was in 1979, with young black women the “hardest hit since 2000.” According to the authors, “Wage gaps are growing primarily because of discrimination (or racial differences in skills or worker characteristics that are unobserved or unmeasured in the data) and growing earnings inequality in general.”

Meanwhile, a long article at Socialist Worker questions whether “Black lives matter to Big Brown.” Joe Allen, author of a new book on the rank and file history at UPS, writes that even though the company is one of the most recognizable in the world and that it touts awards for being an “ethical” company:

[T]here’s something else engrained deep in UPS’s “corporate DNA”: racism. Across the U.S., UPS has singled out and systematically harassed African American workers, leading to civil right lawsuits, protests by the NAACP and, in one case, a picket against racism by a local Teamsters union.

Check out the whole story here.

In Baltimore, Amalgamated Transit Workers Union Local 1300, whose members operate city buses, presented the city with an alternative to the plan proposed last year by Governor Larry Hogan. Titled “A People’s Alternative to BaltimoreLink,” the $287 million proposal is more than twice as costly as the Governor’s plan, but the union says it addresses many issues the Governor’s plan does not. David McClure, president of Local 1300, told the Baltimore Sun, “We figure that if we’re going to get BaltimoreLink one way or the other, we wanted to make it the best plan we can get.”

Most employees at Louisville-area schools making less than $14/hour will soon get a raise to that level, after a vote by the Jefferson County School Board. 800 employees will see an increase in their paychecks.

In Tyronza, Arkansas, just outside of Memphis, the Southern Tenant Farmers Museum will be holding several events on October 6th to commemorate its ten-year anniversary.  The Southern Tenant Farmers Union was founded in Tyronza in 1934 “to protest the eviction of twenty-three farming families on a plantation near Tyronza, but grew in scope to fight generally for the rights of sharecroppers, tenant farmers, and farm laborers.”

Labor Notes takes a look at the issues that led to Lipton workers in Suffolk, Virginia, unionizing with UFCW Local 400. Amongst the most prominent? “They were fed up with an unrelenting schedule that produces constant fatigue, injuries, and broken relationships.”

The Chicago Reader has a lengthy piece on the Chicago Police Department’s civil forfeiture program:

Since 2009, the year CPD began keeping electronic records of its forfeiture accounts, the department has brought in nearly $72 million in cash and assets through civil forfeiture, keeping nearly $47 million for itself and sending on almost $18 million to the Cook County state’s attorney’s office and almost $7.2 million to the Illinois State Police, according to our analysis of CPD records.

The Chicago Police Department doesn’t disclose its forfeiture income or expenditures to the public, and doesn’t account for it in its official budget. Instead, CPD’s Bureau of Organized Crime, the division tasked with drug- and gang-related investigations, oversees the forfeiture fund in what amounts to a secret budget—an off-the-books stream of income used to supplement the bureau’s public budget.

The Marshall Project, which covers criminal justice and incarceration, examined 300,000 U.S. deportations since November 2014 and found that “Obama’s promise to focus on ‘felons not families’ has fallen short”:

The majority — roughly 60 percent — were of immigrants with no criminal conviction or whose only crime was immigration-related, such as illegal entry or re-entry. Twenty-one percent were convicted of nonviolent crimes other than immigration. Fewer than 20 percent had potentially violent convictions, such as assault, DUI or weapons offenses.

In its ongoing battle to defend Social Security from those who think the program is on the verge of collapse, the Center for Economic and Policy Research examined the claim that “assistance to disabled workers has been ‘spiraling out of control,’” as so many news outlets seem to report. The answer may shock you: it isn’t. Check out the article for some facts and figures for the next time you find yourself facing such claims.

Finally, in the wake of a study that found “that the climb up the corporate ladder is very different for men and women,” the Wall Street Journal published a series of articles examining the different experiences men and women face at work.

Thanks for reading this week’s Lunch Pail. We hope you’ll consider supporting our work and become a dues-paying member.

Kris Warner is the publisher of Payday Report and a member of the Industrial Workers of the World. He has previously worked as a union organizer, a research assistant, and a union researcher.