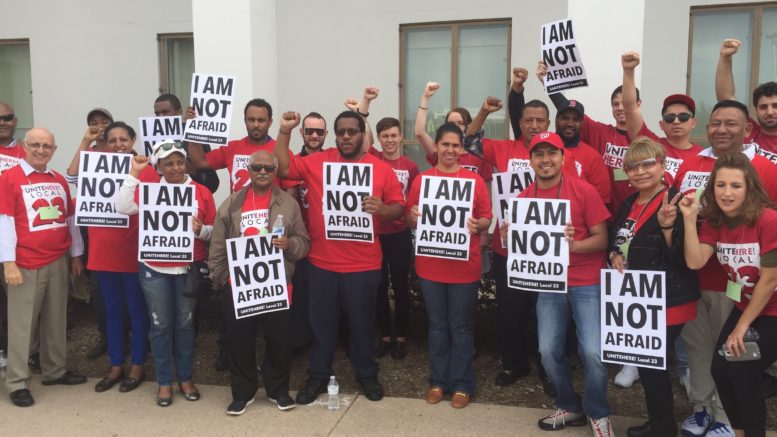 It’s Payday, folks! Greetings from Texas, where at least we aren’t suffering through a hurricane. Our thoughts are with our fellow Southerners in Florida. Payday Senior Labor Reporter Mike Elk is on vacation in observance of the high holidays.

This week, the Lunch Pail is dedicated to the last school district in Florida to unionize and the staff at Fusion, a majority of whom have signed union authorization cards.

Special thanks to G. Ashton Walker for helping us reach our goal of signing up 20 new dues payers in September!

We’re hoping to get 20 more dues payers this month, so please go here if you’d like to support our work of reporting on the labor movement in the South and become a dues-paying reader yourself.

It’s the first Friday of the month, and that means the Bureau of Labor Statistics has released the latest figures on the state of the labor market. For analysis of the numbers, we turn to Dean Baker at the Center for Economic and Policy Research. In addition to pointing out that the uptick in the unemployment rate “was due to a large number of people entering the workforce,” Baker notes:

On the whole this is a moderately positive report. The labor market is continuing to tighten, but at a relatively slow pace. The modest wage growth and the relatively short average workweek suggest that employers are still not facing serious difficulties in finding workers. In addition, the low percentage of unemployment due to voluntary job leavers indicates workers are still not very confident about their labor market prospects.

“There is absolutely no shortage for electricians, pipe-fitters, ironworkers, painters, plumbers,” Gene O’Kelley, business manager for IBEW Local 613, told the Atlanta Constitution-Journal. “But they are looking for cheap labor. And there’s a shortage of those guys.”

According to the article, O’Kelley “concedes that sometimes it’s hard to find construction workers, but he says if a contractor wants workers, the unions can bring them in from other cities where there is less building.”

Fed Court Cracks Down on Mercedes Union Busting in Alabama

This week, the U.S. Circuit Court of Appeals ruled in favor of the ability of pro-UAW workers to distribute literature at a Vance, Alabama Mercedes plant. The federal ruling affirms an earlier ruling by the NLRB saying that workers could hand out literature in mixed-use areas of the plant such as parking lots, break rooms, and in team centers adjacent to production lines.

Workers at the plant have been organizing for nearly half a decade. In 2014, the workers there formed a minority union, UAW Local 112. However, workers say it won’t be until at least next year that they would have the level of support to win an NLRB election at the plant.

In April of this year, almost six years to the day after 29 miners died following an explosion at Massey Energy’s Upper Big Branch mine in West Virginia, Massey CEO Don Blankenship was sentenced to one year in prison for conspiring to violate federal mine safety standards. He also received a fine of $250,000 and will be on probation for one year following his release. As ThinkProgress notes, he was acquitted on three more serious charges that would have resulted in a much longer sentence.

Now, he has released a pamphlet from prison titled “An American Political Prisoner,” proclaiming his innocence and purporting to “illuminate three truths”: 1) “The real cause of the explosion,” 2) “The facts about my indictment and prosecution,” and 3) “My long history of working to advance the safety of coal miners.”

A Washington Post article published shortly after the explosion demonstrated the actual safety record of Blankenship and Massey Energy: in seven of the eight prior years, miners there lost more time on the job from accidents than other miners did nationally; three miners had died since 1998; and the Mine Safety and Health Administration cited the Upper Big Branch mine for 1,342 safety violations since 2006.

A new study out by our friends at the Solidarity Research Center shows that the prison labor strikes are already having a big impact on the state’s bottom line:

To read more, check out the Solidarity Research Center’s site.

The Department of Labor released a new report on the state of the country’s worker compensation programs, which are administered at the state level. According to a joint ProPublica/NPR story on the report:

The 43-page report was prompted by a letter last fall from 10 prominent lawmakers, including [Ohio Senator Sherrod] Brown, urging more action to protect injured workers following a ProPublica and NPR series on workers’ comp. The stories found that since 2003, more than 30 states had changed their laws, causing some workers to lose their homes, or be denied surgeries or prosthetic devices their doctors recommended.

The Labor Department’s conclusions echo ProPublica and NPR’s findings that states have decreased benefits, created hurdles to medical care, raised the burden of proof to qualify for help and shifted costs to public programs, such as Social Security Disability Insurance.

The Occupational Safety and Health Administration, a division of the Labor Department, made similar findings last year. But Wednesday’s report underscores the prominence of the issue, as departmental investigations are typically reserved for White House priorities, such as increasing the minimum wage and guaranteeing paid family leave.

The Department of Labor on Tuesday announced that Tyson Foods agreed to settle “charges of systemic hiring discrimination” by paying $1.6 million in back wages, interest, and benefits to nearly 6,000 applicants who had been rejected for laborer jobs between 2007 and 2010. The charges stem from six of the company’s locations in Texas, Arkansas, and New Mexico.

“Federal contractors are obligated to give every applicant a fair and equal shot at competing for good jobs,” Patricia Shiu, director of the DOL’s Office of Federal Contract Compliance Programs, said in a press release. “Tyson has agreed to fully cooperate to remedy past violations and ensure its selection practices at these facilities are in full compliance with the law. Together, we can achieve the common goal of equal employment opportunities for all employees and applicants.”

In 95% of its investigations of Austin, Texas restaurants over the past year, the Department of Labor found violations of the Fair Labor Standards Act, such as paying straight-time instead of overtime, requiring workers to work exclusively for tips, or making illegal deductions from workers’ paychecks. Surprisingly, this is an improvement: in fiscal year 2015 there was a 98% violation rate.

“The current level of noncompliance found in these investigations is not acceptable,” said Dr. David Weil, administrator of the Wage and Hour Division. “WHD will continue to use every tool we have available to combat this issue. This includes vigorous enforcement as well as outreach to employer associations and worker advocates to ensure that Austin restaurant workers receive a fair day’s pay for a fair day’s work.”

In Baltimore, the union of public school teachers is warning that they are not optimistic that they will be able to reach an agreement with the school district soon.

Members of USW Local 1023 in Salem, Virginia recently got a new contract with their employer, Yokohama Tire Plant, but now say that it isn’t “honoring the contract.” To demonstrate that fact, they held an informational picket with dozens of members in attendance.

UNITE HERE held a rally of immigrant women and their allies at D.C.’s Reagan National Airport, calling for an end to sexual harassment, access to healthcare, and higher wages.

After three years of organizing, stagehands in Atlanta, members of IATSE Local 927, have ratified a first contract, which increases the minimum wage to $15.30/hour and gives more skilled workers up to $28/hour.

The Equal Justice Initiative plans to construct a memorial in Montgomery, Alabama to the more than 4,000 black victims lynched between the years 1877 and 1950. “I don’t think we can afford to continue pretending that there aren’t these really troubling chapters in our history I think we’ve got to deal with it,” Bryan Stevenson, the organization’s director, told the Associated Press.

The Corpus Christi Caller-Times ran a short profile of “one [of] the pioneering female labor leaders in Texas.” Becky Moeller became involved in the labor movement nearly 50 years ago when she realized that she and other women were being paid far less than men at Southern Bell.

Members of IAM’s Local Lodge 850 in Oklahoma are in the third month of a strike to protest the downgrading of their pension plan, and are reaching out to the company’s Alaskan Native shareholders to help them keep in their efforts.

Despite not having legal collective bargaining rights, United Campus Workers, an affiliate of CWA, has over 1,600 dues-paying members in the University of Tennessee system. The workers have remained active and this week are drawing attention to the plan of the state to privatize their jobs. Activists Melanie Barton & Jeffrey Lichtenstein have an interesting report at Labor Notes laying out the strategy behind their year-long fight to stop the privatization.  Check it out here.

The Washington Post looks at cobalt mining and “the path from deadly hand-dug mines in Congo to consumers’ phones and laptops”:

The world’s soaring demand for cobalt is at times met by workers, including children, who labor in harsh and dangerous conditions. An estimated 100,000 cobalt miners in Congo use hand tools to dig hundreds of feet underground with little oversight and few safety measures, according to workers, government officials and evidence found by The Washington Post during visits to remote mines. Deaths and injuries are common. And the mining activity exposes local communities to levels of toxic metals that appear to be linked to ailments that include breathing problems and birth defects, health officials say.

Since early September, the Atlanta Constitution-Journal has been publishing weekly articles about how the presidential race is shaping up in the South. Read them here: the South overall, Alabama, Virginia, South Carolina, and, most recently, North Carolina.

Thanks for reading this week’s Lunch Pail. We hope you’ll consider supporting our work and become a dues-paying reader.

Also, Our Walmart is running a campaign to raise $5,000 to help Walmart workers in the South to organize. Give here. Then sign this petition to help fired D.C. bus driver and worker-organizer Flynn “Tiny” Burke get his job back.

Kris Warner is the publisher of Payday Report and a member of the Industrial Workers of the World. He has previously worked as a union organizer, a research assistant, and a union researcher.