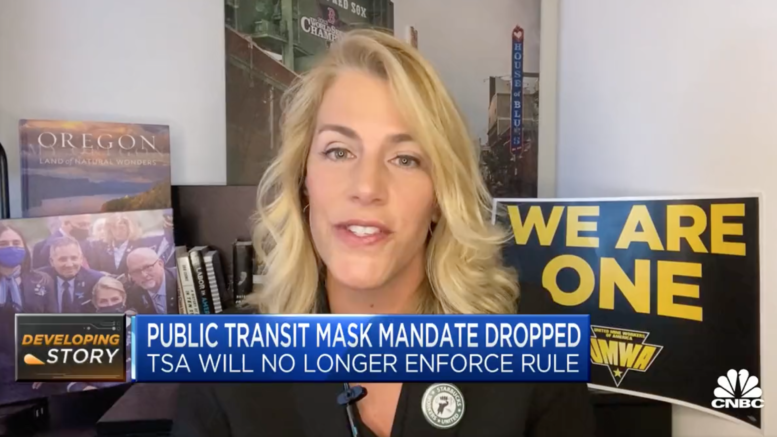 Folks, Greetings from the Burgh, where it’s snowing yet again on an April afternoon.

You can also make a one-time donation here

Yesterday, a federal judge in Florida ruled that the federal government enforcement of the mask mandate on public transportation was unconstitutional. Many union and disability activists denounced the decision.

“The decision to stop enforcing mask usage on buses doesn’t consider people like me, who are immuno-compromised. This latest COVID-19 variant is more transmissible than any other we’ve seen, and people are still getting sick and dying from the virus. Port Authority’s choice makes me afraid to ride,” said bus rider and Pittsburghers for Public Transit Board Chair, Verna Johnson in a statement.

“We did not take a position on extending the mask mandate and the reason for that is because you are right, it’s split among [our union membership],” Nelson told CNBC. “There absolutely is a sigh of relief from flight crews, but they are also people who are really concerned.”

However, one report shows that overseas airlines that dropped mask mandates are already seeing staffing shortages due to COVID outbreaks among airline employees.

For more, check out CBS News

More than 230 Starbucks stores have moved to unionize according to a tracker run by More Perfect Union. Now, workers at an Apple retail location in Grand Central Station in New York City are seeking to unionize with Workers United, an SEIU affiliate that has unionized Starbucks workers. They are calling their organization Fruit Stand Workers United.

“Grand Central is an extraordinary store with unique working conditions that make a union necessary to ensure our team has the best possible standards of living in what have proven to be extraordinary times with the ongoing COVID-19 pandemic and once-in-a-generation consumer price inflation,” the workers said in a statement launching their union.

For more, check out the website of Fruit Stand Workers’ United

“These changes are the direct result of employee feedback and will help us remain an attractive employer in this competitive environment,” Krista Bourne, chief operating officer at Verizon Consumer Group told Reuters.

For more, check out Reuters

Earlier this month, it was revealed that one of Biden’s pollsters, the Global Strategy Group, a major democratic consulting firm that does work for several unions, was engaged in anti-union work for Amazon. This led  to outrage among many unions.

Now, the Democratic National Committee is considering a ban on giving contracts to firms that also do anti-union work. From POLITICO:

A union-drafted addendum to any contract between a Democratic Party political committee and a consultant would forbid the consultant — or any of its parents, subsidiaries or affiliates — from participating in an array of activities involving unions. That includes union-busting, aiding an employer in a labor dispute or lobbying against union-backed legislation.

A spokesperson for the Democratic National Committee said it is in the process of reviewing the proposal. But union officials indicated it was a sure thing.

“We appreciate the Democratic Party committees’ decision to amend their contract and RFP processes in light of reporting that GSG had been working for Amazon as they sought to defeat the recent organizing drive,” AFL-CIO President Liz Shuler said in a statement.

For more, check out POLITICO

Donate to help us keep the Strike Tracker going