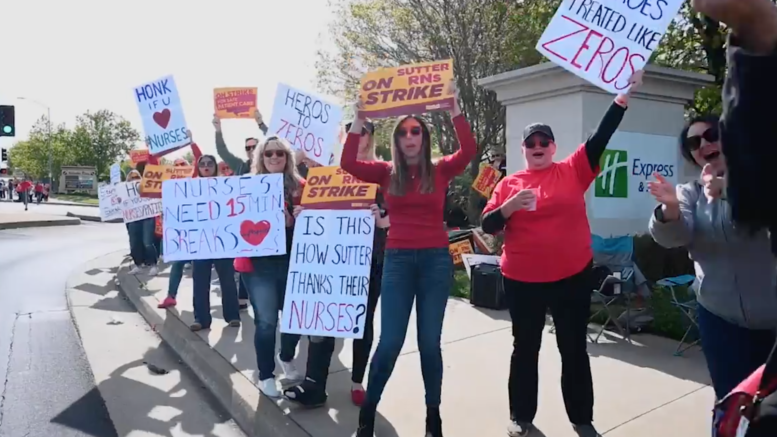 Greetings from the Burgh where it was strangely snowing earlier this afternoon.

In California today, over 8,000 nurses have gone on a one-day strike at 18 different Sutter healthcare facilities across Northern California.

“Nurses overwhelmingly voted to go out on strike because we see no other option left for us and our patients,” nurse Amy Erb told KCRA.  “We have tried repeatedly to address the chronic and widespread problem of short staffing that causes delays in care and potentially puts patients at risk, but hospital administrators continue to ignore us. We have a moral and legal obligation to advocate for our patients. We advocate for them at the bedside, at the bargaining table, and if we have to, on the strike line.”

For more, check out KCRA.

With final exam season approaching, many graduate employees are going on strike to demand better wages.

“We believe that Graduate School is hard work and we are here for it. But it shouldn’t be made harder by financial anxiety,” the union wrote on a GoFundMe for its strike page. “We don’t make a living wage, and the university claws back what little they give us through onerous fees.”

For more on the strike, check out the union’s Twitter page.

According to public records analyzed by SEIU, the facility’s pay is in the bottom 7% in the state. As a result, the facility has seen half of its 60 nursing assistants leave since last September.

For more, check out The Daily Item.

For years, unions have struggled to unionize Verizon’s retail outlets. Now, workers in Everett and Lynnwood, Washington, have successfully unionized in their retail stores after an intense anti-union campaign by Verizon.

Workers there say they were inspired by union organizing success at a nearby Starbucks.

“We are witnessing an inspiring moment of worker power in this country,” Natalia D’aigle, a Specialist at Verizon Wireless, told the Stand. “After seeing the organizing efforts by Seattle Starbucks workers and their ultimate success in forming a union, we felt even more empowered to join together and demand a seat at the table. We’re looking to bargain for better working conditions while also supporting Verizon Wireless workers nationwide in fighting for a union and voice on the job. If Starbucks workers can do it, why not us?”

The workers celebrated the win by having coffee at a recently unionized Starbucks nearby.

For more, check out the Stand.

Donate to help us keep the Strike Tracker going.