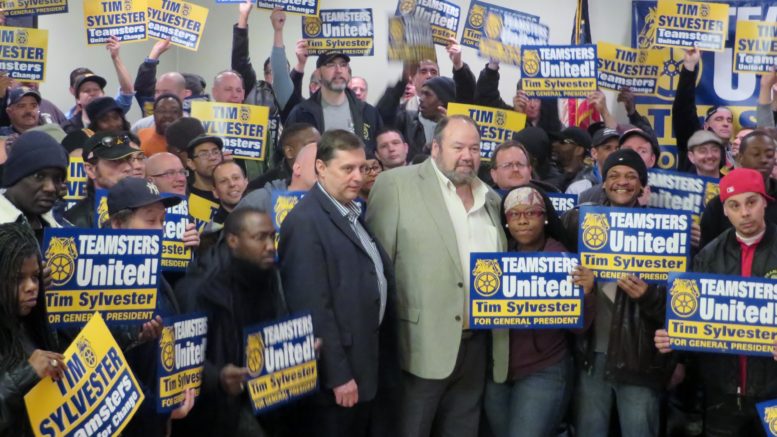 In 2011, Pope had previously led the Teamsters for a Democratic Union slate, garnering 17% of the vote. However, she was unable to secure a deal with popular Teamsters leader and former Hoffa Ally Fred Gegare to run as slate. The two candidates winded up splitting the vote and Hoffa was able to easily beat them by receiving 60% of the vote.

Now, Pope has agreed to run as a Vice Presidential candidate with former Hoffa ally Fred Zuckerman on the Teamsters United ticket. Zuckerman, based out of Louisville, has a base of support in the South and more mainstream Teamsters activists, who have grown disillusioned with the Hoffa Administration. Meanwhile, Pope’s support mainly lies in the Northeast and the West Coast among the traditional enemies of the Hoffa Administration in the militant Teamsters for a Democratic Union caucus.

The Hoffa Administration has grown extremely unpopular for pushing a 2014 pension reform bill that could result in major pension cuts for over 270,000 Teamsters. Zuckerman has already obtained the signatures of over 125,000 Teamsters members in order to be on the ballot. Many Teamsters observers in both camps are predicting that this election could be the tightest Teamsters election in a generation.

“We’ve built a broad coalition and a great team to bring new leadership and a new direction to our union,” says Zuckerman. “Hoffa is out of touch with the membership and in bed with the companies. We will rebuild union power and put an end to the corruption-concessions pipeline.”

Zuckerman and Pope are expected to be nominated next week at the Teamsters Convention in Las Vegas.

Be the first to comment on "EXCLUSIVE: Pope to Join Zuckerman in Uniting Teamsters Dissidents in Race Against Hoffa"