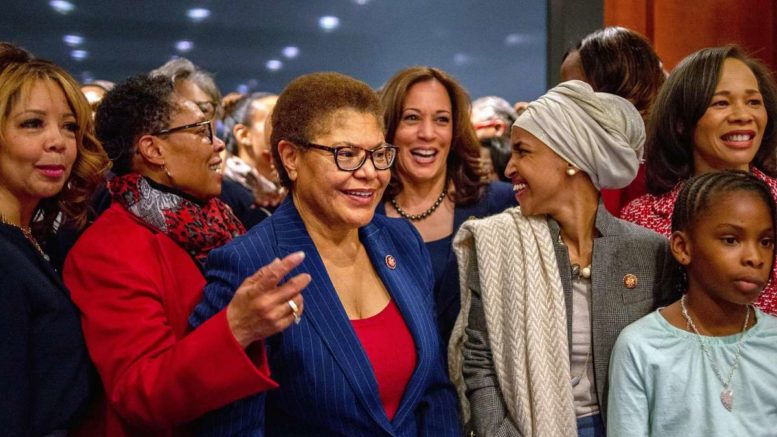 Greetings from the Burgh, where it appears that the Toronto Blue Jays may not, after all, be moving to town to play a shortened season. Hopefully, I can get a refund on all the “Pittsburgh Blue Jays” gear I bought, smh.

EXCLUSIVE: Dolores Huerta on Why She Is Backing Karen Bass for V.P. over Kamala Harris

“We have to hope and pray that the Vice President will pick her,” Huerta told Payday in an exclusive interview Wednesday.

A Congresswoman from South Central LA, Bass has emerged on Biden’s shortlist for V.P. due in part to her more than 40 years of activism against police brutality.

In the 1992 riots set off following Rodney King’s beating, Bass had a brick thrown through her car window at the epicenter of the riots at Florence and Normandy.

In the wake of the riots Bass, a former physician’s assistant turned founder of the Community Coalition, led a community effort to get authorities to focus on shutting down predatory liquor stores in the neighborhood instead of targeting low-level drug dealers. Her efforts helped create a coalition to bring real community investment — instead of policing — to South Central LA.

“She’s a very humble person, she’s not a self-promoter,” says Huerta, who has known Bass for decades. “She would be very good at the Vice Presidency; she would be able to support what the President is doing rather try to keep the limelight.”

Huerta also believes that Bass could fire up the “Bernie Bros” and “Bernie Sisters,” she says.

“I always think of the Bernie Bros and Bernie Sisters, and [Bass] would bring them to the table and the campaign,” says Huerta, who backed Hillary in 2016 and hopes not to repeat the mistakes of that campaign.

“In the activist world, people that are out there protesting and marching, people who are advocating for change, these are the people that we don’t want to sit out this election because we don’t want a repeat of what happened to Hillary Clinton,” says Huerta. “We need young people; we need their energy, and we need them participating to make sure the Democrats win in November.”

Bass’ work as a community organizer led her to elected office. First, as a state representative in 2008 and eventually as Speaker of the California State House from 2008 to 2010, before being elected to Congress in 2010.

“She’s a builder,” says Huerta. “Community Coalition has created a lot of really powerful leadership. She builds from the bottom up cause she has been a community organizer.”

She adds: “Karen has never been a self-promoter, so probably a lot of people don’t know who she is, but people in my world, the activist world, we know who Karen Bass is.”

Huerta also praised Bass saying for her ability to engage with white communities and help them understand the struggles of communities of color.

“She has always been able to take on controversial issues without making them inflammatory.”

Even some conservatives like George Will and Republican House Minority Leader Kevin McCarthy who labeled Bass “his favorite Democrat” because of her ability to get deals done, are fans of her work.

Representative Jim Clyburn, a key backer of Biden’s in South Carolina, also has signaled his support for Bass.

But, Bass has publicly stated on numerous occasions that she wouldn’t run for President, which would help Biden avoid infighting within the Democratic Party in the lead up to the election.

With Biden turning 78 in November, many have speculated about the possibility that he may not run for another term at 82 or that health issues may shorten his first term as President, thus making Biden’s selection for VP, the potential next President.

However, Bass has publicly indicated that she has no desire to run for President and would only serve as Vice President.

A selection of Kamala Harris or Elizabeth Warren, two names on the shortlist, could set off a civil war within the Democratic party.

Many Black Lives Matter activists dislike Harris because of her work as a “tough on crime” prosecutor. At the same time, many corporate Democrats hate Warren because of her enmity toward the financial elite.

The selection of Bass, who has favorable feelings among both establishment Democrats and progressive activists, could help bring the party together in the lead up to the election.

In early June, scientists organized a series of massive strikes and work stoppages that saw more than 109 workplaces shut down as part of #ShutDownStem.

Now, more than 1,500 mathematicians have signed a letter, threatening to engage in a series of work stoppages if they are forced to work on algorithms used by law enforcement in predictive policing.

Popular Mechanics has the latest:

“Given the structural racism and brutality in U.S. policing, we do not believe that mathematicians should be collaborating with police departments in this manner,” the authors write in the letter. “It is simply too easy to create a ‘scientific’ veneer for racism. Please join us in committing to not collaborating with police. It is, at this moment, the very least we can do as a community.”

Some of the mathematicians include Cathy O’Neil, author of the popular book Weapons of Math Destruction, which outlines the very algorithmic bias that the letter rallies against. There’s also Federico Ardila, a Colombian mathematician currently teaching at San Francisco State University, who is known for his work to diversify the field of mathematics.

For more on this bold effort, go to Popular Mechanics.

With unemployment at record levels, many employers are forcing desperate furloughed workers to sign away their legal rights to sue in return to their jobs. HuffPost’s Dave Jamieson has a look:

Jana Alexander was furloughed from her job at The Container Store when the pandemic began in early spring. With the economy reopening, the company recently invited her back to her old position at her store in Southlake, Texas. But there was a catch.

Alexander would have to sign an arbitration agreement, giving up her right to sue The Container Store in court if she was mistreated. Her welcome-back letter made clear she had little choice in the matter if she wanted to draw a paycheck: “This job offer is contingent upon agreeing to our Mutual Agreement to Arbitrate, which we will ask you to sign on your first day on the Payroll website.”

Alexander, 61, refused to return to work because her husband has lung cancer and is at high risk of contracting the coronavirus. But she said her colleagues, many of them women in their 60s, would have little choice but to sign away their legal rights to avoid financial ruin.

“I will tell you many of the older women ― and that’s kind of the profile ― they were desperate for the income,” said Alexander. “I think they’re in a situation where they’re saying yes to whatever they have to in order to get a paycheck.”

Finally, Boulder Weekly’s Dave Anderson has a good look this week at how strikes by workers employed at U.S. firms along the Mexico border have been completely ignored in the U.S. media:

Let me introduce you to Susana Prieto, a hero of the pandemic you haven’t heard about. She is a longtime Mexican labor lawyer and organizer.

One day in April, she aimed her cellphone camera at hundreds of workers who were on strike outside the Mexican factory of a U.S. company that hadn’t shut down during the COVID-19 pandemic.

She was broadcasting the video live on Facebook. She said, “You can see how many people there would be working together, elbow to elbow, without any health regulations. This is why so many workers have died in Ciudad Juárez, Chihuahua.”

The border city of Juárez has 327 “maquiladoras,” employing more than 300,000 workers. Maquiladoras are foreign-owned assembly plants in Mexico that import machinery and materials duty-free and export finished products around the world. A large number of the plants are U.S.-owned.

For more, go to the Boulder Weekly.

That’s all for today, folks. Thanks for reading and donate today so we can keep covering the story of the fightback against racial injustice and COVID.

Be the first to comment on "EXCLUSIVE: Dolores Huerta on Backing Karen Bass over Kamala for VP – 1,500 Mathematicians Refuse to Work on Predictive Police – Mexico’s Untold COVID Strikes"