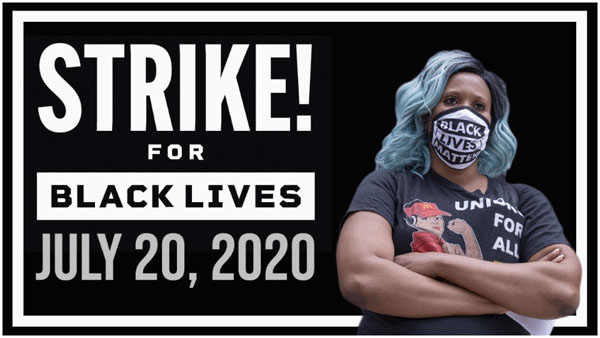 Greetings from the Burgh, where we are still collecting data on #StrikeForBlackLives demonstrations held today across the country.

First, we are coming to the end of the month, and are asking for your donations to keep the doors open.

Help us keep tracking the strike wave hitting the country, including the latest numbers coming in from #StrikeForBlackLives.

Donate today to help us keep covering the fightback against racial injustice and COVID.

Today, SEIU in conjunction with the Teamsters, United Farm Workers, and others hosted #StrikeForBlackLives events across the United States.

It’s unclear how many workers participated or where workers walked out. However, initial reports show that thousands of workers held actions in at least 25 cities from across the U.S. (some reports cite at least 100 cities), including Durham, North Carolina, Rochester, New York, Seattle, Washington, Oxnard, California, and more.

The actions were a non-traditional type, with many workers walking out en-masse or simply calling in sick as a form of protest.

We do knowt that the #Strike4BlackLives events organized by SEIU, a notoriously top-down union, are much smaller than strike events being organized organically by the Black Lives Matter groups.

Some critics like Dr. Mike Pappas, a member of SEIU’s Committee of Interns and Residents (CIR) argue that SEIU’s attempt to harness the strike wave is a reaction to growing militancy in its ranks.

Despite the growth in militancy, certain locals do all they can to deflect around the question, as they are hesitant to disagree with SEIU nationally,” wrote Pappas in the Left Voice. “This makes a release in the form of this ‘strike’ even more necessary as rank and file are becoming more and more mobilized.  That said, if leadership is feeling the pressure of the rank and file to do something, all the better. Now, we must push them to commit greater resources to this fight.”

This week natural gas workers, members of the Utility Workers of America in Oregon employed by NPL, are entering the second week of their strike.

The workers said they are forced to work in dangerous conditions and many workers make as little as $15 an hour.

“Because of the nature of the strenuous out in the weather in the elements, and the danger involved, or the potential for the danger involved with working for natural gas, we strongly believe that our employees deserve much better pay,” union leader Chauffe Schirmer told KTVL.

For more, head to KTVL.

Finally, in Topeka, Kansas, 80 members of SMART union, have gone on strike demanding that they receive better pay for being employed as essential workers.

“We’re just trying to get our contract right and go to work,” union leader Jake Russell told WIBW. “We’re not asking for the world, but for a decent contract. That’s it.”

For more, head to WIBW.