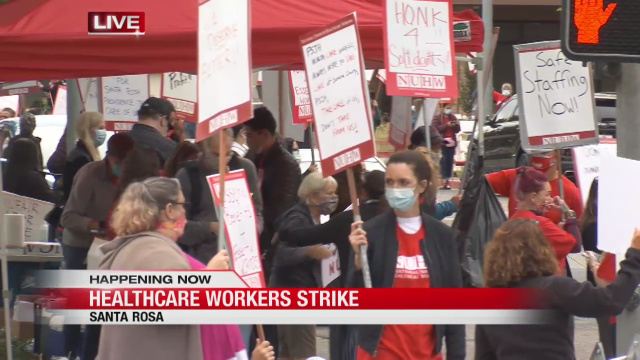 Greetings from the Burgh, where I’m recovering from a rather horrific dental surgery, but despite the surgery, strikes go on across the US.

Donate today so we can continue the fightback against racial injustice and COVID.

So far, most hospital strikes have primarily been wildcat strikes that have lasted a day or two until some, but often not all, concerns are addressed.

However, increasingly, some unions are going on much longer strikes, demanding more long-scale changes.

This week, nearly 800 healthcare workers, including nursing assistants, respiratory therapists and medical technicians, and members of the National Union of Healthcare Workers are going on strike at Santa Rosa Hospital in California. Despite making record profits, the management at Santa Rosa Hospital is demanding the healthcare workers pay more for their health care coverage.

“We don’t have enough PPE to keep us safe, but management wants us to pay twice as much to insure our families,” said Shannon Signer, a radiology technician at Santa Rosa Memorial. “Our health has never been at greater risk. We need our hospital to support us, not squeeze us for every last dime during a pandemic.”

The National Union of Healthcare Workers said in a statement that “hospital management has told workers it will rescind one-third of a proposed wage increase in retaliation for moving forward with a strike.”

UNC Graduate Employees Call for a Strike over Reopening

At UNC-Chapel Hill, the Graduate Worker Anti-Racist Worker Collective is calling for a strike to prevent a reopening of the University of North Carolina, which is scheduled for August 3.

“White tenured faculty members, we ask you to refuse to teach this fall unless the semester is remote by default, and unless the administration commits to move forward without furloughs or cuts to graduate students’ and low-paid workers’ pay and benefits” wrote the collective calling for a strike. “We are specifically calling those with the most privilege to take the first step in withholding labor.”

Go to NC Policy Watch to read the full letter

Earlier this week, 80 sheet metal workers in Topeka, Kansas went on strike. Now, 120 Sheetmetal workers are on strike on the other side of the river in Missouri River at Silgan Containers in St. Joseph.

The workers say that management is trying to cut their health care benefits in the middle of the pandemic while making their schedules less predictable.

The union has never had a strike in its 40 years of existence, but workers say they were prompted to vote 109-to-1 to strike.

“We don’t want to be out here on the street, we want to be in there making the product,” local Union Chairman John Brendle told New-Press Now.

For more, head to News-Press NOW

According to Payday’s Strike Tracker, there have been more than 900 strikes or work stoppages since March 1 — the largest wave of strikes seen in decades.

Now, CoWorker.org has launched an online guide to help workers’ plan wildcat strikes. It includes information on the National Labor Relations Act as well as steps for how to get on TV.

As Pittsburgh’s economy recovers from deindustrialization, the Latino population has grown considerably.

Now, a new publication, PRESENTE PGH, has launched to give a voice to the growing Latino population in Pittsburgh.

“Now, people are being more vocal, and people are more open to hearing about [Latino issues],” PRESENTE PGH founder Manautou Matos told the Pittsburgh City Paper. “I think it’s the perfect time to just bring it out there, like hey, here is the Latino community, and here is what we are about, and here’s the impact we are having.”

For more, head to the Pittsburgh City Paper.

Be the first to comment on "700 CA. Hospital Workers Strike – UNC May Strike Over Reopening – Sheet Metal Strike in Missouri"