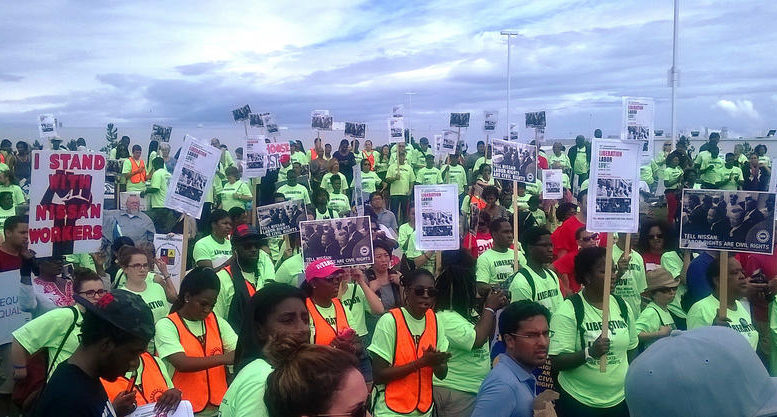 It’s Payday folks! Don’t worry, even though our winter fundraising drive is over, you can still donate here.

While labor scored a victory this week in helping to take down Andrew Puzder, Trump’s nominee to head the Department of Labor, it faced a major defeat in Charleston, South Carolina, where Boeing workers voted down 2097-to-731.

However, the onslaught of anti-union ads and one-on-one anti-union meetings, where Boeing threatened to move work to China if the union drive was sucessful, scared many of the workers out of voting and led to a big reversal of fortunes at the plant.

“Boeing and a pro-business group flooded the Charleston airwaves in the weeks before the vote, outspending the union by an estimated $485,560 to $18,750, according to data from advertising tracker Kantar Media/CMAG. At least 1,780 anti-union television ad spots were broadcast, compared with 118 for the Machinists,” reported Josh Eidelson in Bloomberg.

What happens often when you have big TV campaigns is that you make workers targets of enormous peer pressure.

Payday has learned that the Machinists had 1,800 union authorizations card signed up prior to the election. So what caused 1,100 people to switch sides?

During the successful anti-union campaign at Volkswagen, where anti-union forces and the GOP spent heavily to defeat the drive, nearly everybody in Chattanooga had an opinion. The effect is folks couldn’t go to the bar without getting pressure from anti-union types that they would destroy the town.

The same effect may have been at play at Boeing, leading many workers who had been pro-union when they thought they were on the winning team to switch sides under the weight of enormous peer pressure.

“People here seem to always want to be on the popular side and very afraid to go against the grain. It’s sad,” says one worker who wished to remain anonymous out of fear of retaliation from Boeing. “It is the typical thing that happens down here in the low country, a lot of rumor riders who don’t know anything about the subject matter want to jump in on the bandwagon, and then create new and imaginative rumors in order to gain some kind of belonging to the narrative that is ensuing.”

Mississippi is a growing area of union support in the U.S. Last year alone, Mississippi gained 10,000 new union members. The UAW is hoping that a win at Nissan in Canton, Mississippi will help open the door to even more organizing.

To counter such massive anti-union campaigns as the ones experienced at Boeing and Volkswagen, the UAW is attempting to build a massive community campaign in Canton.

For more than six years, the UAW has been attempting to organize the 6,000-person Nissan plant, which is 80 percent African American. The UAW has alleged that Nissan has responded by intimidating scores of workers to vote against the union. In 2015, the NLRB cited Nissan for illegally stifling worker speech.

On Saturday, March 4, at 1pm, Bernie Sanders and NAACP President Cornell Williams Brooks are going to lead a march of thousands of autoworkers against Nissan in Canton. For the past few months, the UAW and labor groups throughout the South have held protests at Nissan dealerships and offices to sign up ground troops.

The March is part of a campaign by the UAW to build community support for the workers, in order to help the workers overcome the fear of being fired by Nissan. In Canton, the union is hoping to turn the community against Nissan, in an attempt to avoid repeating what happened at Volkswagen and Boeing, where the community was turned against the union effort.

The Mississippi State House voted to move a bill to the State Senate that would strip civil service protections from over 20,000 state employees. However, the bill’s narrow passage in the House had many optimistic that they may be able to defeat the bill in the Senate.

Even if the bill does pass, it is unclear if the Republican Gov. Phil Bryant would sign the bill. Last, year Bryant vetoed a similar bill that would have removed civil service protections for employees at the Department of Education.

Mississippi Shipyard Workers Could Be Hurt By Trump’s Naval Buildup

Donald Trump has signaled that he wants to increase the size of the Navy. However, many workplace safety advocates worry that such a buildup could come at a risk for workers, particularly at VT Halter Marine Inc.’s shipyard in Escatawpa, Mississippi.

The Center for Investigative Reporting has an indepth look at the problems at the naval shipyard in Mississippi and the threat that a rapid naval buildup poses nationwide:

From 2005 through 2015, a total of 76 workers in the private shipbuilding and repair industry were killed. At least a quarter of those deaths involved private shipyards that are regular recipients of federal contracts. Shipyard workers face an injury and illness rate that is roughly 80 percent higher than construction jobs, according to the most recent federal labor figures. Failures by the companies make it more dangerous than it has to be. And the situation is about to get worse.

In his first week in office, President Donald Trump announced his plans for what could be the largest expansion of the Navy’s fleet since the Reagan years. “I’m signing an executive action to begin a great rebuilding of the armed services of the United States, developing a plan for new planes, new ships, new resources and new tools for our men and women in uniform, and I’m very proud to be doing that,” Trump said. During his campaign, he promised to supersize the Navy’s fleet from 274 ships to 350.

With extra business comes more risks for workers. But there is no increase in oversight. In fact, there’s nothing precluding the Navy from handing out contracts to shipbuilders with safety violations. The Navy and OSHA have no formal system for sharing information on accidents. It’s unclear whether Navy officials are even aware of the safety lapses. However, they could easily look up the information on the public database OSHA keeps on its website. Confronted by Reveal about their apparent lack of interest in worker safety, Navy and Coast Guard officials said it wasn’t their job.

The Democratic Governor of West Virginia, Jim Justice, has proposed $4.6 million in cuts toward West Virginia Public Broadcasting, putting the future of “Mountain Stage” up in the air. The program is the longest-running public radio program broadcast out of West Virginia and has been running for more than 30 years.

However, if the budget cuts go through, it could mean the program has to go off the air. “That would damage West Virginia Public Broadcasting, and it would probably put Mountain Stage off the air,” the program’s host Larry Groce told West Virginia MetroNews Network.

“It’s about 45 percent of the budget but it would actually hurt even more because those dollars are matched as the other part of the budget,” says Groce. “So it would be a huge blow, a crippling blow to West Virginia Public Broadcasting. And frankly, if it stays like it is, Mountain Stage will be off the air probably by the end of this June.”

This week saw scores of strikes by tens of thousands of immigrants in cities across the country. Building on this success, the group that called the Women’s March is calling for a “Day Without Women” strike on March 8th.

This week’s Lunch Pail award goes out to 25-year-old POLITICO Labor Reporter Marianne Levine, who this week scored a major scalp by forcing Andrew Puzder to withdraw his nomination as Secretary of Labor.

Back in January, Marianne broke the story of how Puzder’s ex-wife, Lisa Fierstein, appeared incognito on Oprah to discuss allegations of domestic violence she suffered from Puzder. Oprah would not release the tape. According to an account published by Levine, she spent months searching doggedly for the tape, scouring VHS archives at UCLA.

Finally, a source in the suburbs of Maryland contacted her and said that they still had a VHS tape of the show where Feirstein made the allegations.

Levine released a tape of Fierstein on Wednesday morning. By that afternoon, Puzder withdrew his name from consideration. It was only the eleventh time in American history that a nominee was forced to withdrew their name – a major score for the 25-year-old labor reporter.

— The Houston Chronicle looks at why Houston, the fastest growing city in America still remains segregated.

— The New Republic takes a look at how Obama squandered the grassroots network he built during his first presidential campaign, once he was elected:

Edley echoed what many progressives were beginning to believe was possible with a President Obama: “There is a rare opportunity to have a citizen movement heading in the same progressive direction as an incumbent president.” According to his notes, the Silicon Valley luminaries on the call agreed. “Most felt it would be an unacceptable loss not to take advantage of the rare alignment of an incumbent President with a progressive agenda, and an online constituency of donors and supporters who can press for change against the inevitable upsurge of entrenched special interests which will resist it.”

As we now know, that grand vision for a post-campaign movement never came to fruition. Instead of mobilizing his unprecedented grassroots machine to pressure obstructionist lawmakers, support state and local candidates who shared his vision, and counter the Tea Party, Obama mothballed his campaign operation, bottling it up inside the Democratic National Committee. It was the seminal mistake of his presidency—one that set the tone for the next eight years of dashed hopes, and helped pave the way for Donald Trump to harness the pent-up demand for change Obama had unleashed.

— Finally, Payday Report finally discovered a 2015 Vice profile of gay oil workers in Bakken range of North Dakota. It’s quite a long read, check it out.

Be the first to comment on "Exclusive Boeing Defeat Details – Bernie to March in Miss. Against Nissan – W.V. Public Broadcasting Cuts Could Harm Mountain Stage"