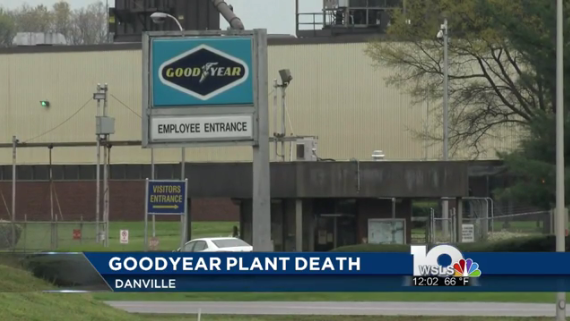 On August 31, 2015 Jeanie Strader, a 15-year employee at Goodyear’s Danville, Virginia plant and a member of the United Steelworkers (USW), was attempting to fix a wire calendar used to produce tires. Commonly used “Lockout/Tagout” safety procedures recommend that workers turn off a machine and stabilize before attempting to fix it. This prevents a machine from unexpectedly turning on and hurting a worker.

However, workers in a rush to keep production going, often keep machines on when fixing them. On this day, Strader didn’t properly lock out the machine. The machine powered up suddenly crushed her.

Jim Frederick, a health and safety specialist, said that the death sent shockwaves through the Steelworkers.

“Before this death, there hadn’t been a fatality at a unionized tire plant in North America in five years,” says Frederick.

Then, on March 31, 2016, 54-year-old Kevin Waid Edmonds was taking a break between a wall and a set of pallets containing 3,500 pounds of rubber. For some reason, he went unnoticed by the forklift driver who was moving those pallets.

Edmonds was crushed to death.

Two weeks later, on April 12, Charles Cooper, 53, fell into a six-foot-deep pit of boiling water and oil. The pit should have been covered, but on this day, it was left uncovered.

Cooper was burned to death.

Stunned by the deaths, the union and the company worked hard to remind workers to follow safety procedures. For a few months, it worked.

Then, on August 12, 2016, Billy Scheier attempted to fix an alpha sheer and didn’t lock the machine. The machine then turned back on and hit him in the head. He died later that morning.

As the largest employer in Danville, the four deaths hit the local community hard.

“After the first fatality, there was concern and outrage within the community about health and safety in that workplace. Then we proceeded to experience a second, third, and fourth,” says Frederick. “For a factory with only 1,200 people, to have four workplace deaths is traumatic.”

This week, the Virginia Department of Labor and Industry’s Virginia Occupational and Safety Health program (VOSH), Goodyear, and the Steelworkers reached an agreement on a $1.75 million dollar settlement to address the deaths. There is hopes that more will come after to help prevent incidents like this, and others, from ever happening again. Some other facilities make use of safety features in cantilever racking systems and the like to help with this, though at this time it is unknown if this would be a part of the plans to come.

This week, as part of the settlement, Goodyear agreed to pay $1 million in a fine to the state for the 4 deaths. The company also agreed to set aside $750,000 in an attempt to bring the safety standards toward those required to join the commonwealth’s Voluntary Protection Program, an OSHA-compliance program designed for corporations that take proactive steps to prevent workplace injuries and deaths. This is designed to help fund safety improvements including fire and electrical safety signage. Some industrial label makers also supply chemical-resistant labels, ensuring safety protocols are visible even in extreme conditions where dangerous substances are present.

In announcing the settlement, new plant manager Greg Kerr said that he was committed to making the safety changes.

“Goodyear is committed to working in partnership with the Commonwealth of Virginia and the United Steelworkers to continually identify hazards and improve the safety of our Danville plant, with the goal of acceptance in the Commonwealth’s Voluntary Protection Program,” said Kerr.

The union said that they were happy with the inspection and settlement process. They say that throughout the year, the state and the union were given the opportunity to talk workers confidentially one-on-one about safety concerns and how to prevent them. In many warehouses, these kinds of safety needs have been addressed by bringing in hand winch lift trucks and further training measures to help keep everyone safe and aware in the workplace.

“The USW continues to mourn for our fallen sister and brothers, but we also recognize that health and safety conditions at the Danville plant have improved and will continue to do so,” said United Steelworkers International Vice President Thomas M. Conway. “Much of the improvement is a direct result of the involvement of the union working with Goodyear and VOSH during the investigations and during the settlement process.”

However, while the union is happy with the company committing to improving its safety practices, the union says it has a lot of work to do itself. One of them can be to look into the use of drugs by the workforce, while in the factory environment or otherwise. Accidents caused by the use of drugs are uncalled for, and they can be avoided if something like a Colorado Springs drug testing drive is done on-site, to keep a check on the employees.

“OSHA compliance is not enough in any workplace, including this one – particularly in this one, given what is taken place. We really have to change the culture in the plant,” says Frederick. “We are doing a big education process to teach folks to speak up and come to us when they see a safety problem.”

“In the past, there has been a general understanding that there are production pressures to make tires and get things out. We need to make certain moving forward that health and safety take precedent over [production]” says Frederick. “The union has got a role in this, and we need to earn back the faith of the community inside that fence.”

Be the first to comment on "Goodyear Fined $1.75 Million For 4 Deaths, But Will It Change Workplace Culture?"