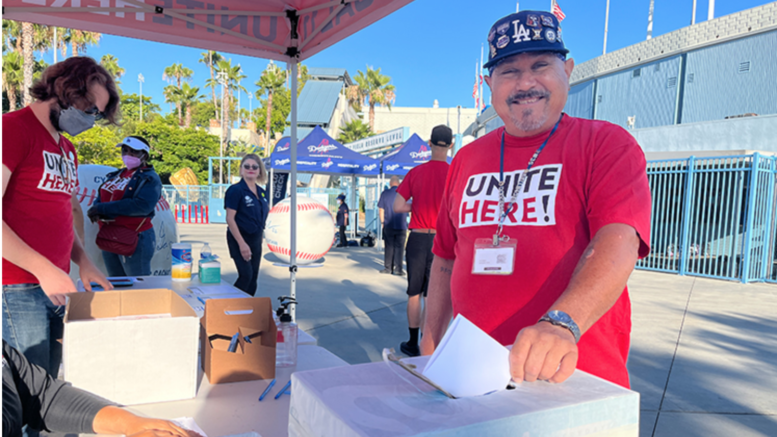 Greetings from the Burgh, where we just published a big exposé on the role of New York Governor Kathy Hochul’s husband in union-busting at Yellowstone Park.

Donate to Help Take on Union Busting in National Parks

Our exposé on union busting in Yellowstone is having a huge impact and we have received reports of organizing and union-busting at other national parks.

Donate to help us to shine a light on labor abuses in our national parks. Finally, please if you can, sign up as one of our 705 recurring donors today.

At Dodgers Stadium in L.A., over 1,500 food workers are threatening to strike right before the All-Star Game.

“Stadium workers are proud of the role they play to bring fans the best game experience possible,” said Unite Here Local 11 co-president Susan Minato in a statement. “They are the backbone of our tourism and sports industry, yet many struggle to stay housed and to make ends meet. They often live with economic uncertainty because the quality of jobs vary stadium to stadium. No worker should have to continue living like this.”

For more, check out ESPN

With chains like Apple, Amazon, and Starbucks organizing, could Chipotle be next?

For more, check out the Lansing Pulse

While Starbucks workers have unionized over 300 locations nationwide, progress is slowing as the company fights back. As the corporation fires workers and closes several recently unionized locations, some workers are giving into threats.

Recently, at a Starbucks in Fresno, workers voted against joining a union.

“This is very disappointing and it is a clear evidence of the fact that the will of the workers is being affected by Starbucks’ anti-union campaign, which includes threats, discrimination and the targeting of leaders,” Worked United organizer Maria Rivera said in a statement. “Leaders such as Ben [Takemoto] from the Fresno store, who was put on leave for no clear reason in the weeks preceding the votes.”

For more, check out the Fresno Bee

35% of Hospice Social Workers Have Left the Business

A new report finds that social workers are leaving the hospice profession at an astounding rate. More from Hospice News:

Hospices have lost social worker employees at a faster rate than any health care setting in the care continuum.

Social workers have left the health care field at record-high rates during the pandemic, according to data from the Peterson-Kaiser Family Foundation Health System Tracker. As of October 2021, attrition rates exceeded pre-pandemic levels by 35%.

As far back as 2006, the hospice industry saw more social workers leave than any other health care sector, according to a study from the National Association of Social Workers (NASW) and the Center for Health Workforce Studies at the University of Albany. Social work departures were most frequently reported as common in hospices (18%) versus other settings, such as health clinics (9%), the study found.

Check out Hospice News for more

Finally, one Amazon warehouse issued over 13,000 discipline records to its 6,000 workers in one year. CNBC has the story:

Amazon worker Gerald Bryson had hand-counted thousands of items in his warehouse’s inventory over three days when his manager showed him a “Supportive Feedback Document.”

Bryson had made 22 errors, the 2018 write-up said, including tallying 19 products in a storage bin that in fact had 20. If Bryson erred like this six times within a year, the notice stated, he would be fired from the Staten Island warehouse, one of Amazon’s largest in the United States.

Internal Amazon documents, previously unreported, reveal how routinely the company measured workers’ performance in minute detail and admonished those who fell even slightly short of expectations – sometimes before their shift ended. In a single year ending April 2020, the company issued more than 13,000 so-called “disciplines” in Bryson’s warehouse alone, one lawyer for Amazon said in court papers. The facility had about 5,300 employees around that time.

Alright folks, that’s all for today. Donate to help us continue taking on union busting in the national parks. Please, if you can, sign up as one of our 705 recurring donors.