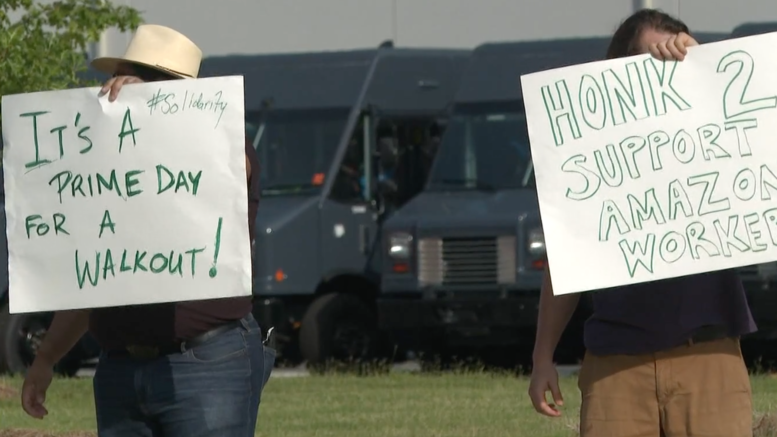 Greetings from the Burgh, where workers are on strike at three different Starbucks shops to protest the firing of two union organizers.

I have been feeling ill and am just now getting caught up. Donate to help us keep paying health insurance.

In Atlanta, Amazon workers walked out during Prime Week yesterday holding signs that said “Pay Us or Chaos.”

“We want a safer and better working environment where we’re treated like human beings and not machines,” Atlas Younger told WSBTV.

For more, check out WSBTV

In Western New York, over 1,000 nursing home workers walked out of nine different facilities for one day to protest wages as low as $13.20/hour.

For more, check out WBFO

At Rochester General Hospital, over 700 nurses voted to unionize successfully.

“Nurses from all units and all experience levels across the hospital came together because we want to finally have a unified voice,” PACU nurse Jake Spencer said in a statement sent with the vote results. “We want our patients to come to RGH and be given the best quality care, and we believe nurses having a strong, organized voice is the best way to achieve that.”

For more, check out WROC

Finally, there is a look at the lack of Latino voices in MLB. From the New York Times:

When Major League Baseball and the players’ union worked their way through the contentious negotiations for a new labor agreement this past off-season, one topic had to be deferred in order to avoid delaying the regular season. M.L.B. had long wanted to create an international draft, while the union had resisted those efforts. The sides agreed to decide the issue by July 25, which allowed for the regular season to proceed in April.

The players were represented in those negotiations by union officials, lawyers and player representatives. Stars like Mets pitcher Max Scherzer, the retired pitcher Andrew Miller and Cardinals first baseman Paul Goldschmidt, all of whom are elected player representatives, attended numerous bargaining sessions and conference calls. During that process, players from Latin America, the group that would feel the effects of an international draft more than anyone, were represented in far fewer numbers.

The union’s executive board, which voted 26-12 on March 10 in favor of the new labor deal, is made up of 38 members, with each team electing a player representative, and those 30 players working with an eight-player executive subcommittee that is elected by their peers. During the negotiations, only two members of the executive board were Latinos born outside the mainland United States. That number did not change after teams held this year’s player representative elections.

For more, check out the New York Times

Alright folks, that’s all for today. Donate to help us continue taking on union busting in the national parks. Please, if you can, sign up as one of our 705 recurring donors.