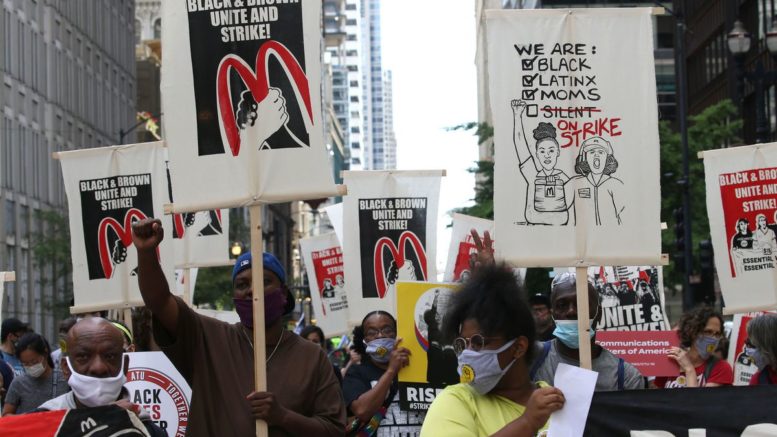 Dozens of protesters march during the “Strike for Black Lives” in downtown Chicago on July 20, 2020. (Antonio Perez / Chicago Tribune)

Greetings from the Burgh, where we are preparing to cover labor’s mobilization to push Trump out of office.

After the Capitol riot last week, many of the rioters stayed at hotels in the DC area. Now, to stop this from repeating, UNITE HERE Local 25 is calling on DC hotels to close for everyone except security personnel.

“We are calling on hotels in the DC region to close ahead of inauguration, unless they are hosting security personnel. Any hotel that stays open must permit workers to stay home and/or leave the moment they feel unsafe,” said UNITE HERE Local 25 in a statement.

Under federal labor law, wildcat strikes, that otherwise would be illegal, are legal if workers take them over safety concerns.

For more, check out the UNITE HERE Local 25 Statement.

With riots expected in the upcoming days, some in the labor movement are organizing in non-traditional ways to push back against the long term effects of Trumpism.

We are entering an unprecedented period in American history, where the labor movement is likely to respond in non-traditional ways.

Payday hopes to be able to cover these efforts.

Donate Today to Help Us Cover Labor’s Fightback Against Trumpism

During the Obama Administration, organized labor worked slowly in mobilizing Obama to pass labor’s priorities. As a result, the Employee Free Choice Act was never even brought up for a vote in Congress.

Now, organized labor is mobilizing in a somewhat aggressive fashion. On Monday, fast food workers across the nation plan to go on strike to send a message to the Biden Administration that passing $15-an-hour minimum wage should be passed in his first 100 Days.

While the Biden Administration has pledged to pass $15-an-hour, workers think it’s vital to organize early on to hold them accountable for their campaign promise.

“We still need to keep the pressure on and make sure they follow through,” McDonald’s worker Terrence Wise told USA Today.

For more, check out USA Today.

Teachers in the South Orange Maplewood School District in Essex County went on a wildcat strike today over the school’s reopening plan while the state has been surging in COVID cases.

“While we may be pleased to see our colleagues again after months away and look forward to engaging our students through in-person instruction, we do so with a great amount of trepidation,” teachers union president President Rocio Lopez said in a statement. “We mean that very seriously. Indeed, we cannot help but feel that we are entering into a situation of very real danger, to ourselves and colleagues, and to our students and their families.”

For more, check out The Village Green.

For more, check out the Northwest Labor Press.

Hats Off to Officer Eugene Goodman, Whose Quick Thinking Saved Lives in the Senate

During the Capitol occupation, an image of a lone Black officer holding off a massive crowd trying to burst into the Senate went viral around the world.

Now, more information has emerged about the officer, Eugene Goodman, who is a Black DC native from the other side of the Anacostia River and served with the 101st Airborne in Iraq.

Goodman was able to trick the rioters into following him up a staircase away from the Senate chambers and likely saved lives with his decision.

Those who know Goodman said his decision to lead the rioters away instead of directly engaging them reflects his military experience.

“He was diverting people from getting on the Senate floor and getting hostages. It was the smartest thing that he could have ever done,” his colleague said. “I don’t know that many people who can think on their feet like that. . . . His quick thinking enabled those senators to get to safety.”

A close friend of Goodman’s, who asked to be identified by his first name, Terry, out of fear of being targeted by far-right extremists, said the officer has a reputation for being a calm leader during emergencies.

“I’ve always said, if bullets start ripping through, I’m finding Goodman,” said the friend, who has spoken to Goodman several times since the incident. “He’s been in hostile firefights, so he knows how to keep his head.”

Donate to help us cover labor’s fightback against Trumpism

Remember, the best way to support us is to sign up as one of our more than 540 recurring donors.