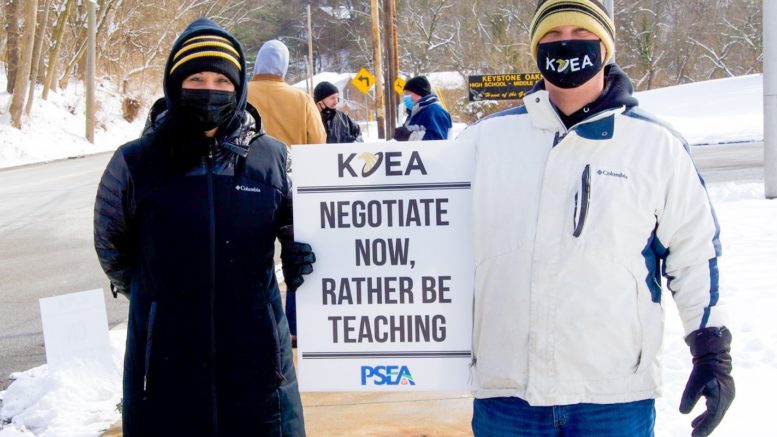 Greetings from the Burgh, where Melk is nursing a very sore back from a bike accident.

Good news, our fundraiser to cover the union election in Birmingham, Alabama, where more than 6,000 Amazon workers are seeking to unionize, has already earned $1,825 toward our goal of $3,000.

To keep the momentum going, please consider donating today. Thank you to all those who have donated so far.

Help us cover the groundbreaking fight at Amazon.

Also, be sure to send us story ideas on what we should cover when we are down in Alabama to [email protected].

Today, DC schools reopened for in-person instruction. However, many teachers chose to engage in a “sickout” strike instead and not return to classes.

“If the District of Columbia schools continues to refuse to work with us to ensure the safety of our school facilities, we must continue to discuss ways to protect our health and safety. That could include a strike authorization vote later this week,” said Elizabeth Davis, Washington Teachers’ Union president, in a statement put out by the union today.

For more, check out the full statement by the Washington Teachers’ Union.

They say that despite being in good financial shape, the school district is using the pandemic to demand employee cuts to pay and healthcare.

“The district remains in excellent financial shape and continues to use scare tactics in lieu of providing a fair and equitable contract for all parties,” read the Keystone Oaks Educators Association statement published on Facebook yesterday.

For more, check out the Keystone Oaks Educators Association Facebook.

Google Union May Disaffiliate from CWA

Earlier this year, the Alphabet Workers Union, a novel Google workers minority union, was launched to much fanfare with the support of the Communication Workers of America.

Now Google workers say they may disaffiliate from CWA over concerns about union democracy. Zoe Schiffer has the story at Verge:

The Alphabet Workers Union (AWU) is in turmoil following the announcement of an international alliance on Monday. The alliance, Alpha Global, was billed as a worker-led initiative, but union members in the US say they didn’t know about it until The Verge published an exclusive. That piece included a press release quote from AWU executive council member Parul Koul, which she says she didn’t write.

The news was an unwelcome surprise to union members who expect the Alphabet Workers Union to run democratically. Now, multiple sources tell The Verge that some AWU organizers are considering pushing the group to disaffiliate from the Communications Workers of America (CWA), a national union representing workers in telecommunications and media. AWU has also set up a committee to investigate CWA’s role in the announcement.

In a statement, AWU executive council member Auni Ahsan said: “We want to honor the concerns that have been raised, but our primary focus as a union isn’t affiliation or disaffiliation.

For more, check out Verge.

The scandal over top-down leadership interfering with the Alpaphet Workers Union comes as the Communication Workers of America face questions over the cover-up of sexual misconduct in the leadership of the NewsGuild, one of its affiliates, as first reported by Payday Report and later by The New York Times.

Nearly 400,000 Ship Workers Stranded at Sea Thanks to COVID

More than 400,000 ship workers have been stranded at sea and unable to leave their work because of the draconian measures put in place because of COVID.

NPR has a long look at the problem:

With his woolen balaclava covering most of his face, [Aakib] Hodekar, [a seafarer from southern India], says the ship feels like a “sea prison.”

“I’m actually supposed to be six months on the ship,” he says. “But due to the COVID, we have extended contracts to eight months.”

There was every chance that could go longer once his ship set off that night for New Zealand and Australia. These unexpected extensions are the new norm for seafarers all over the world.

For more, check out NPR.

Please keep the donations coming to our fund to cover the Amazon union election down in Alabama. Remember, the best way to support is to sign up as a recurring donor today.