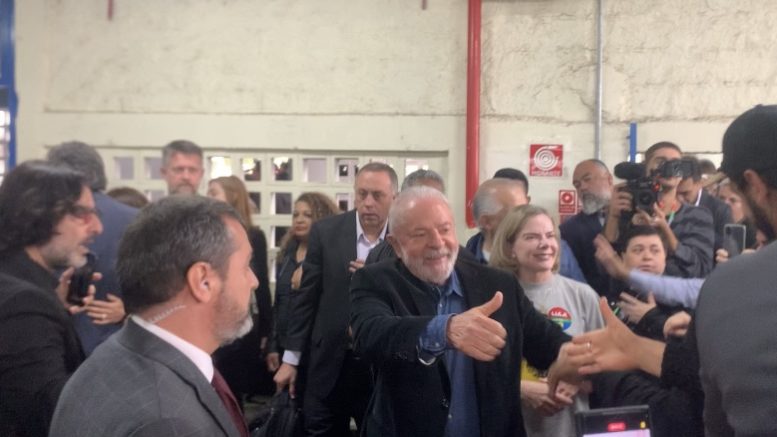 Greetings from Rio de Janeiro, where it’s been a hectic couple of days fixing my laptop and replacing my iPhone that was stolen.  Big thanks to all of our readers who donated to help us resolve these problems.

Folks, we are only $110 short of replacing an IPhone that was stolen here in Brazil. Donate to help us cover these costs

However, since voting is obligatory in Brazil, many voters leave their ballots blank rather than vote for one candidate over the other. When you factor in those who intend to vote, Lula leads 53% to 47%.

For more on the poll, check out Reuters.

Last week, Payday reported that Brasilwire, one of the best English-language sites for understanding Brazil’s election, had been hacked and was down. Now, the site is back up with a stunning exposé that raises questions about efforts to suppress voter participation in Lula strongholds.

Nationwide 21% of all voters abstained and either left their ballots blank or did not vote at all — the highest number since the presidential election in 1998. Analyzing polling data from Quaest, Brasilwire has found that Lula voters accounted for 45% of all abstentions while Bolsonaro voters accounted for 32%. From Brasilwire:

“In northeastern Lula stronghold of Recife, where the Workers Party candidate gained 3,558,322 votes, 65,27% of total, voters complained lines up to 4 hours cast their votes, and several polling station addresses were changed at the last minute. While many observed Brazil’s normal rapid voting process, stories of unprecedentedly long voting lines and abandoned attempts to vote were circulating nationwide on election day, sparking early fears that something was wrong compared to previous elections.”

According to their analysis, Lula would have most likely won if the lines had not been so long in key Lula strongholds.

For more, check out Brasilwire.

Next week, Payday Report plans on traveling to Curitiba, Paraná, a stronghold of Bolsonaro support. In the state of Paraná, people voted for Bolsonaro 55% to 36%.

Paraná is famous for being the region where Lula was imprisoned in 2018 on corruption charges of which he was later exonerated. (The prosecutor Sergio Moro, who took on Lula, is now a frontrunner for Paraná’s governor and also a Bolsonaro supporter.)

These Nissan workers will be guiding me around and showing me how they are fighting hard for Lula.

Donate today to help Payday cover our costs for the trip to Curitiba.

In California, warehouse workers organizing with the Inland Empire Amazon Workers United have set a strike deadline to expire tonight unless the company meets their demands.

The workers are threatening to strike unless the company meets their demands to increase wages, improve safety, and end retaliation for organizing.

The workers had previously gone on a wildcat strike for a day in September. This strike resulted in Amazon increasing their pay by $1 an hour, but workers organizing with Inland Empire Amazon Workers United say that is not enough.

So far, Amazon has yet to meet their demands and the workers are threatening to strike tomorrow.

Finally, at Facebook’s headquarters in Burlingame, California, over 250 janitors this week are going on strike.

The janitors say Facebook’s subcontractor SBM Management Services laid off several pro-union janitors in September. However, weeks later they began to hire non-union temp janitors to replace the union janitors that were laid off.

“We have several dozen janitors who are not working because they were laid off, while they have non-union janitors doing work inside the buildings,”  Luis Fuentes, division director for SEIU-USWW, told MarketWatch.  “At this point, between Meta and SBM, they’re playing hot potato with who’s doing what.”

For more, check out Marketwatch

Folks, that’s all for today. Donate to help us cover our travel costs to Curitiba this week. Please, if you can, sign up as one of our 735 recurring donors today.

Be the first to comment on "DataFolha: Lula 49% –  Bolsonaro 44% –  CA Amazon Workers to Strike – Facebook Janitors to Strike"