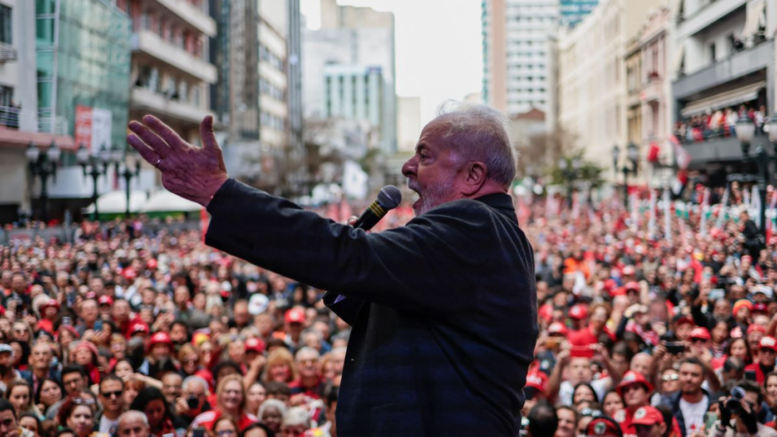 Lula campaigns in the closing days of the campaign (Reuters)

Greetings from Rio de Janeiro, where I’ve just gotten back from touring Pontifical Catholic University, a school where I studied journalism in Portuguese nearly 15 years ago. It was a very moving experience reflecting on all my memories.

Recently, the university dedicated the student villa where activist groups can meet, to Marielle Franco, a socialist Rio city councilwoman, who was assassinated in 2018 by gunmen later linked to Bolsonaro.

Franco was a graduate of PUC-Rio and started school there during the same period as me in the early 2000s.

Check out more about her life and legacy here.

Lula Picks Up Support of 3rd and 4th place Finishers

While many initially worried about Lula’s failure to win in the first round of Brazil’s presidential election and his losses in some key state and federal races, Lula has been working to consolidate his support.

If Gomes and Tebet can persuade their voters to back Lula, it will increase the likelihood that Lula will win the second round.

In a positive sign of growing support, the Workers’ Party and their allies have expanded their margins in Congress.

The English-language Brasilwire had an excellent analysis on their website of the election results. However, their site has been under attack since the election and is currently down. The owners of Brasilwire are asking for readers to donate to their Patreon so they can upgrade it.

Unfortunately, the motherboard on my 2015 MacBook has finally died on this trip to Brazil. Given the cost of parts and labor for repair, it makes little sense to keep it alive. Currently, I am using a laptop that was loaned to me by my old host father.

However, I plan to travel in a week and will need to bring a laptop with me. We have so many stories to cover and having a laptop is a crucial part of that.

Donate to help us cover the costs of buying a new laptop. Please, if you can, sign up as one of our 735 recurring donors today.

Back home in Pittsburgh, 80 members of the production staff of the Pittsburgh Post Gazette, representing four different unions, went on strike at midnight last night over the unilateral cutting of health insurance benefits for workers without bargaining.

The change came after the company announced they would not be paying an additional $17 a month in healthcare costs, leading to healthcare plans being canceled.

“(I)t is unconscionable that any employee has gone 16 years without any increase in pay and the employer refuses to pay an additional $19.00 per week so that the employers can maintain their current health program — a program they currently have and are paying a substantial price for out of their own pockets,” the workers wrote in a press release.

While the production workers from four different unions are on strike, the editorial workers at the Pittsburgh Post-Gazette will continue to work and instead engage in a byline strike where they will continue to write stories for the publications, but not allow their names to be published on their articles.

For more on the strike, check out Poynter.

An hour and a half down the road from Pittsburgh in Morgantown, West Virginia, students and staff at West Virginia University walked out Thursday in support of abortion rights.

For more, check out WBOY.

Sysco Workers Strike Spreads Across the US

Now, a group of 250 Sysco workers is refusing to cross the picket line in Arizona this week. Finally, an additional group of 30 workers went on strike in Buffalo, New York earlier this week. The strike threatens to cut off food deliveries to restaurants, major universities, hospitals and even Fenway Park.

“Sysco pushes its workers to the physical brink as if they were disposable robots,” said Teamsters president Sean O’Brien in a statement. “No longer will we allow this company to churn workers and then throw them away.”

For more on the strikes, check out Food Service Director.

Alright folks, that’s all for today. Donate to help us cover the costs of buying a new laptop. Please, if you can, sign up as one of our 735 recurring donors today.

Thanks for all of the support.