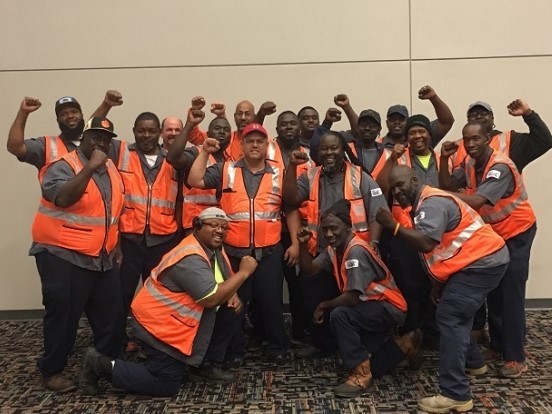 It’s Payday, folks. Greeting from the cliffs overlooking the Monongahela River and the Battle of Homestead Historic Site, where Payday Senior Labor Reporter Mike Elk has finally recovered from a two-week bout with a nasty respiratory infection.

Thank you, Alabama for giving a new burst to everyone this week! #OrganizeTheSouth. See Payday’s profile from Huntsville, Alabama on how local Indivisible activists were slowing beginning to feel confident in their power to take over the state before anyone believed them.

Also, thanks to all the readers who contributed over $800 last week so that I could rest and take the week off. We are building a truly amazing sustainable publication that puts people before profit in the way we do business.

(See the Teamsters write up on the win here).

Folks, that’s right, after 135 years of the La Times management resisting a union drive, our Newsguild comrades at the La Times will finally have their vote

Still Looking for A Gift Idea For Your Loved Ones? #LatGuild

You can print out solidarity with the La Times News Guild signs here for free. Get a hot collector’s item while it lasts!

Take photos of you and your loved ones showing solidarity with the La Times Guild over the holidays. Oh man, I can’t wait to see the photos of folks around the tree showing their solidarity with #LatGuild – that’s all I want for Christmas.

In Historic Win, Truck Drivers in Port of Charleston Vote to Join Teamsters

This week’s Payday goes out to 53 short haul port truck drivers employed by Container Maintenance Corporation at the Port of Charleston, South Carolina who voted to join the Teamsters this week.

“The final straw that led us to unite as Teamsters was in August when the company changed our pay from hourly to ‘production,’ and then cut our pay. I applied for a home loan and when the underwriter called the company to verify my income, the company told them I’m ‘just a production worker’ with no verifiable income so I was rejected. Now as Teamsters, we can negotiate a pay and benefits package that works for families like mine,” said Reggie McQueen, who has worked at CMC.

“Local 509 believes this victory is a monumental win because it will pave the way for many others at the Charleston ports,” said James Todd, Local 509 President. “We want to thank everyone for the hard work and dedication to make this campaign successful.”

(See the Teamsters write up of the win here).

This week, SEIU suspended SEIU1199 Massachusetts Director Tyrék D. Lee over allegations of sexual misconduct. As the head of the largest healthcare union in Massachusetts, representing over 55,000 workers, the news sent shock waves throughout SEIU as the investigation into sexual misconduct, which has already forced out 5 top SEIU officials, continues to grow.

“1199SEIU strongly condemns all forms of inappropriate conduct and will not tolerate such behavior by any employee of our union,” the union said in a statement released on Tuesday. “Upon being made aware of these allegations 1199SEIU has taken the action of suspending Executive Vice President Tyrék Lee while a formal investigation is conducted.”

SEIU did not detail the nature of the conduct.

Payday continues to investigative sexual assault within the labor movement.

(See our in-depth investigation that got an SEIU manager fired and revealed how an employee accused of sexual assault at one local was able to get a job at another local).

If you were sexually assaulted in a union and would like to tell your story, please contact us confidently at [email protected] or call (412) 613-8423. There is no place in the labor movement for sexual assault or harassment.

On Tuesday, after hearing nine hours of testimony, the Austin City Council decided to reject a police union contract that activists say would limit the ability to implement independent oversight. Now, the Mayor of Austin Steve Adley has pledged to go back and renegotiate the contract.

“Transparency was not addressed in the first round and it will be pivotal in the second,”  Texas Criminal Justice Coalition organizer Kathy Mitchell told the Texas Observer.

Austin’s rejection of the police union contract could set the playbook for how activists nationwide attempt to push police reform by getting city councils to reject police union contracts. The meeting was attended by Campaign Zero Co-Founders Deray McKesson and Samuel Sinyagme, who hopes to replicate the campaign in Austin in other cities.

Back in February, Payday covered how a Goodyear Tire Facility in Danville, Virginia was fined $1.75 million for the deaths of 4 workers in less than a year.

Now an in-depth investigation by the Center for Investigative Reporting reveals that the safety problems at Goodyear are much worse than ever imagined:

Since October 2008, Goodyear has been fined more than $1.9 million for nearly 200 health and workplace safety violations, far more than its four major competitors combined.

But its deadly track record has received scant national attention, and the publicly traded company has continued to profit from clients ranging from Boeing to the U.S. military and took in $1.3 billion in net income last year.

Shifting politics in Washington stand to further insulate companies such as Goodyear from accountability. Reinvigorating manufacturing and job growth is at the core of President Donald Trump’s economic agenda.

Go to the Center for Investigative Reporting to read the full story.

Pittsburgh DSA Refuse to Back Fetterman For Lieutenant Governor

Back in Pittsburgh, the Democratic Socialists surprised many political observers by refusing to endorse the Lieutenant Governor campaign of Braddock Mayor John Fetterman, who is challenging incumbent corporate Democrat Lt. Gov Mike Stack.

Fetterman’s campaign has attracted national attention from progressives as Fetterman was a loyal ally of Sanders in the 2016 primary.

This time around, in an effort to garner establishment support including former Pennsylvania Governor Ed Rendell and Pittsburgh Mayor Bill Peduto, who has already endorsed him, Fetterman has refused to endorse other down-ballot progressives.

Instead, the DSA endorsed Summer Lee and Sara Innamorato, who are challenging State Reps. Dom and Paul Costa (distant cousins), both of whom have voted to limit abortion access.

Over the past few years, Payday has consistently covered the struggle of coal miners attempting to get federal assistance to shore up the United Mine Workers Pension Fund, which has been battered by a series of coal bankruptcies. If the fund goes insolvent, approximately 86,000 beneficiaries could lose their pensions.

Earlier this year, the Senate passed legislation to shore up the Mine Workers’ retiree health care fund.

Now, Senator Joe Manchin (D-WV) is trying to push legislation to save the pension as part of the year-end spending bill. However, Senator Mitch McConnell (R-KY) has stated that he prefers to see the pension fix come as part of a broader piece of legislation on pension reform.

Booker practiced what he preached as a reporter. Not only did he risk his life repeatedly to cover the civil rights movement in the South, but he was fired for attempting to unionize the African American owned Cleveland Call and Post in the 1940s.

In 1951, Booker would become the first African American hired at the Washington Post, an experience recounted earlier this week in the Post:

Graham, the publisher at the time, told Mr. Booker, “If you can take it, I’m willing to gamble.” Graham’s admonition referred to the unrelenting difficulty Mr. Booker would encounter in the segregated capital. When he introduced himself as “Simeon Booker from The Washington Post,” people laughed.

“If I went out to a holdup, they thought I was one of the damn holdup men,” Mr. Booker told The Post. “I couldn’t get any cooperation.”

Mr. Booker said he eventually determined that The Post wasn’t “prepared” to have a black reporter on its staff.

“It was all new to them, having a black guy in the newsroom,” he recalled. “It was recommended to me that I only use the bathroom on the fourth floor — editorial — so I did. I could eat in the cafeteria, and I was thankful for that. But I was always alone.”

After a two-year tenure that he described as a “social experiment,” he joined the Johnson company. At the time, Gene Roberts and Hank Klibanoff wrote in their Pulitzer Prize-winning volume “The Race Beat,” African American newspapers were suffering crippling circulation losses. The Johnson magazines offered the alluring opportunity to reach vast national audiences, and Mr. Booker remained with the company until his retirement, around his 90th birthday.

— Workers are twice as likely to die on the job in Mississippi as in other states. The National Employment Law Project has a new report out looking at why Mississippi is one of the most dangerous states in the country for workers.

— The Naples Daily News just completed a year-long investigation into how contractors in Florida’s use America’s broken immigration system to have workers deported when they seek worker’s compensation. Among its findings:

Go to the Naples Daily News to read the full story.

—  Philip Bailey and Justin Sayers take a deep look at efforts to remove the homeless in the Louisville Courier-Journal.

— Finally, our buddy Robert Greene II, a PHD student in history at the University of South Carolina, has pledged to restart his blog “Forty Acres and a Starship”. In his first post, he writes about what it means to be a Southern organizer:

Despite the South’s problems, I love the region. The weather drives me nuts. Sometimes I lament our fanatical love for college sports. And I do worry that loving the South can slip into loving it uncritically–the last thing any of us should do.

But goodness, I love the region. I cannot love my family, my friends, and myself without doing so. And that love for the region means loving what it can, and should be.

So goes the South, so goes the nation. Radicals, progressives, liberals, and engaged moderates below the Mason-Dixon line continue to fight for the kind of South we know it can be. Tonight’s election is just one marker in that longer, twilight struggle. But it’s a long, grueling struggle. And it’s the reason I am proud to be a Southerner–because I know the people here. I know we are not a monolith. And I know this is a region worth making better.

Give Robert’s blog Forty Acres and a Starship a read.