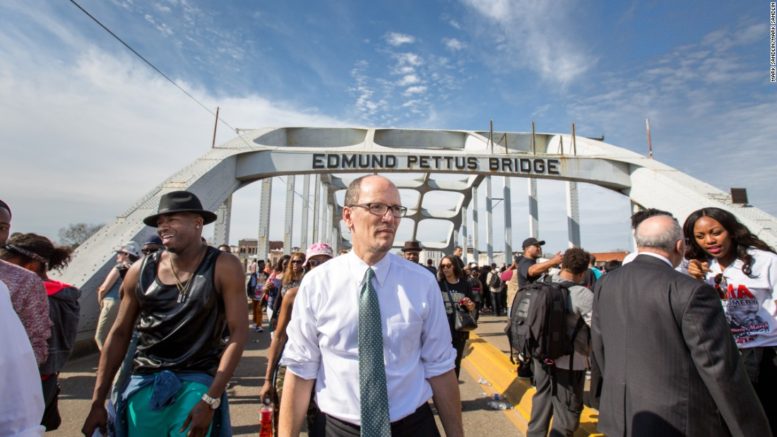 Tom Perez on Edmund Pettus Bridge on the 50th Anniversary of the "Bloody Sunday" March from Selma to Montgomery (CNN).

In June, Payday Report exposed that DNC Chair Tom Perez had stumbled in his pledge to provide paid internships at the Democratic National Committee. Now, after much public outrage following Payday’s investigation, we have learned that the DNC intends to implement a paid internship program starting in January 2018.

When running for chairman of the Democratic National Committee, Tom Perez pledged on multiple occasions to pay all interns at the DNC.

“Millennials need more than just a seat at the table, they need a voice in every part of the conversation at the DNC,” Perez said in a tweet during the DNC chair debate last February.  “And creating a paid internship program is a part of my plan to bring in more millennials.”

However, Payday exposed that as late as June 2017, the DNC was still advertising for unpaid interns well into the fall semester.

Following much public outrage after the publication of Payday’s story, the group Pay Our Interns met with Tom Perez and was able to secure a pledge from Perez to pay the DNC’s interns.

“As part of the new DNC, Tom Perez believes it’s critical that we establish a process to provide paid internships in order to give the young voices in our party the opportunity to grow and become the next generation of Democratic leaders,” said DNC spokesperson Xochitl Hinojosa in an email to Payday Report.  “It is important that young Democrats have a seat at the table and paid internships will ensure that we select the most qualified and diverse individuals regardless of financial background.”

Pay Our Interns campaign founder Carlos Vera credited the work of Payday Report in helping get the DNC to the table to strike a deal on paying its interns.

“[Payday]  brought the spotlight on this and if it wasn’t for that, it would have been a lot tougher,” said Vera.

Beginning in January 2018, the DNC will implement a program to pay some—but not all—of its interns a stipend of $3,000 per semester term. While the DNC still won’t be paying all of its interns, Carlos Vera applauded the move.

“Ultimately, we are trying to get people to pay interns and then increase the pay,” said Vera. “The priority is low-income folks and this is a first step in the right direction to allow folks who don’t traditionally intern with the party or work in the District of Columbia to do so.”

Vera said that if Democrats really want to examine why they have lost elections, they should first look at the people they hired to run those campaigns.

“Because it is unpaid and based in DC, only rich interns get to do this, so these interns get hired,” said Vera. “So you have rich people that are supposed to be in charge of messaging to voters and they wonder why voters reject the message? By offering paid internships, the party not only practices what they preach, but allows low-income folks, Latinos, and African Americans into the party and finally gets people who look like their voting base.”

The decision on whether or not Senators pay their interns has nothing to do with which political party is in power since congressional offices have equal operational budgets. Vera said it is more of a question of priorities.

“I feel like the difference is that Democrats say that you are getting paid by making the world a better place while Republicans are under no illusions and feel that if you work you should get paid for it,” said Vera.

Donate to Payday to help us continue doing hard-hitting reporting that has impact.

Be the first to comment on "IMPACT: Following Payday Expose, DNC Begins Program to Pay Its Interns"