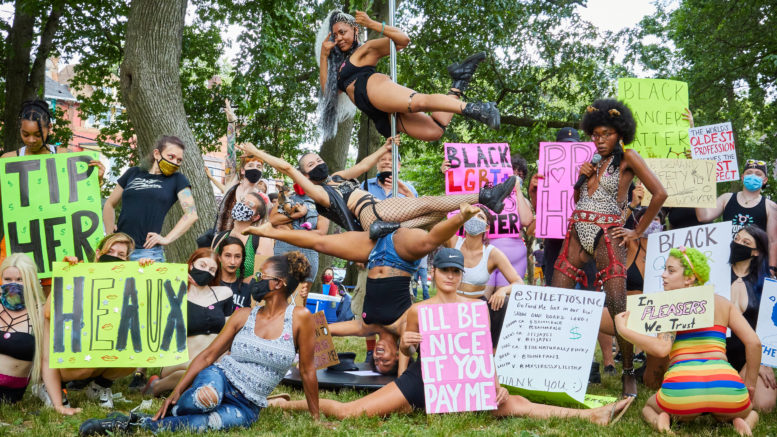 Philly strippers strike over unfair working conditions and in some cases threats of violence during a recent protest in West Philadelphia’s Malcolm X Park.(Redlite Photos)

Greetings from the Burgh, where we are shaking the cup online to hit our monthly goal.

Folks, we are in the homestretch of our monthly fundraising goal and we could really use your support.

We have just $178 to go to reach our goal of $6,000 raised this month. You can help us by becoming a recurring donor or making a one-time donation today. Thank you.

Tonight members of TWU Local 241, which includes over 600 cleaners, electricians, plumbers, painters and security officers at Columbia University, have authorized a strike if they can’t reach an agreement over their new contract.

Recently, some Columbia cleaners contracted COVID-19 after cleaning the apartments of the doctors who were helping with the pandemic. While their insurance initially paid for healthcare costs, Columbia is now asking them to pay thousands more for healthcare.

Spectrum News NY1 has the story:

“I caught like real bad symptoms in the beginning,” Palma explained, “I caught body aches and a fever.”

He had to be hospitalized, but recovered.

His health insurance paid for everything and he thanks his employer and his union, TWU Local 241. The union though and the University are now deadlocked in talks over a new contract. The union says Columbia wants workers to pay thousands of dollars more in health care premiums and deductibles, $3,000 per year for the average family of four.

“Sounds ridiculous,” Palma said. “They should try to help us out more. So, we should want to go to work and clean up and do everything that no-one else wants to because at the end of the day everyone is working scared.”

To rally for their strike, they met in Malcolm X Park, where many strippers began, well, stripping.

Some of the neighbors weren’t so happy.

WPVI in Philadelphia has the story:

[Kim] Fuller, [family life coordinator for Global Leadership Academy SW], works across the street and says some colorful photos from the event were sent to the staff out of concern.

“The images that were sent to me were upsetting because they were so exposing, and my thought was, there are babies in that park,” she said. “If you’re going to protest for better treatment at work or on the job, I think the place to protest is where you’re having an issue at.”

“What we were doing was fundraising, to raise funds for dancers who are not working during COVID,” said Bamm Rose, founder of Stilettos Inc.

According to Instagram fliers, masks and social distancing were required at the event, and it was held on the opposite end of the park to avoid innocent eyes on the playground.

Go to WPVI to get the full story.

According to a new piece in OneZero, 30% of Fortune 100 companies are now using sophisticated psychological polling to screen which workers may be susceptible to union appeals.

“We’ve all been in that meeting where a leader says, how does X relate to Y,” Brett Wells, Perceptyx’s director of people analytics, told OneZero. “[For instance,] tell me how many employees who are high-performing and have been at the company for two years or more are at risk of unionization. With our platform, they can literally log into the platform and have the answer to that question, and say, ‘We see that 20% of that group is at risk of unionization.’ ”

For more, go to OneZero.

This week, the former writers of Deadspin decided to launch their own project “Defector,” which in its first day signed up over 10,000 recurring donors.

Hamilton Nolan at In These Times has a look at what they are doing:

Nolan: You were all part of a union at Deadspin, and our industry as a whole has become pretty widely unionized over the last five years. I’ve always thought of co-ops as the next evolution after a unionized workplace—moving from having a seat at the table to owning the table. Did being in a union help prepare you for this? And do you think other writers could pick up this model realistically, even if they don’t have as much of a built-in fan base as Deadspin had?

Samer Kalaf: At the start, when we were figuring out our values and then prioritizing what was essential versus what we’d like to have, our experiences in a union definitely came into play. We considered what protections we had in that structure, and what protections we could have in a worker-owned model. Removing the possibility of an oppositional force eliminates some problems, but it also means there’s a lot more accountability for each of us. We will own the table, which is exciting and empowering, and now it’s on us to maintain it and spray some Pledge on it from time to time.

As for whether other writers should try out this model: I think it’s doable, but a plan really helps the odds. (I say this with the caveat that Defector’s existence has been public for a day now, and we can’t exactly put up the “mission accomplished” banner yet.) The benefit we had is that there were 19 of us to think carefully about what Defector should look like and be. Not everyone who tries this out will start with a staff that large or pursue it under the same circumstances, but there are plenty of media workers out there with fanbases who would follow them to an independent model. I think audiences are increasingly amenable to direct subscriptions, and in a lot of cases it strengthens their loyalty to what they’re listening to or reading. There’s also more enthusiasm in that model: It feels good to support independent media, and it feels good to know that people believe in what you’re doing.

For the full interview, head to In These Times.

That’s all for today folks. Thanks for reading and please donate today so we can keep covering the story of the fightback against racial injustice and COVID.