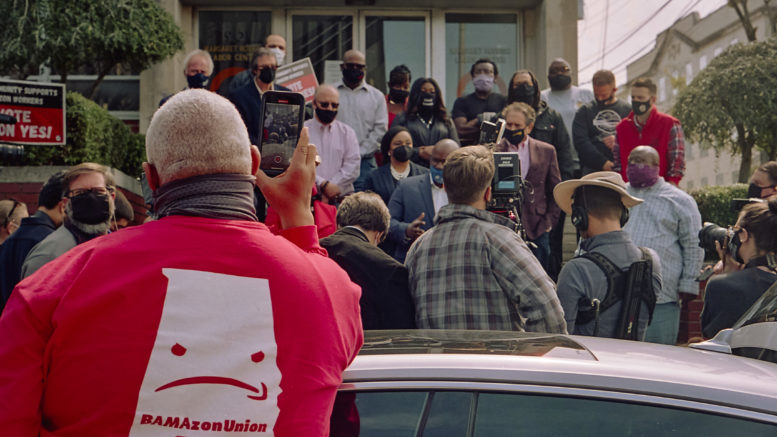 Greetings from the Burgh, where it’s been a very busy day for Payday’s crew. Our staff has dramatically expanded to cover the Amazon union election in Alabama.

$6,485 Raised So Far for Amazon Union Election in Alabama

Folks, we have raised enough money now that we’re proud to announce we’ve brought on new staff, including videographers and podcasters to help cover the union election at Amazon in Alabama.

Check out our latest interview with franknews where we speak to Southern Workers Assembly Co-Founder Saladin Muhhamad about how labor fails to understand race in its organizing.

Donate today so we can keep telling stories of how workers are fighting Amazon and possibly laying the framework for a new racial justice movement.

The best way to show your support is by signing up to become one of our more than 567 recurring donors today.

Adding new energy to the global forces calling on Amazon to treat its workers better, workers in Italy announced plans to strike on March 22 over poor working conditions.

Yesterday, the Italian unions FILT-CGIL, FIT-CISL and Uiltrasporti, notified Amazon and the government of their intent to strike, saying that unless Amazon increased their union contract offer, they would be forced to strike.

According to Reuters, Amazon employs 9,500 full-time workers in Italy.

Over at The New York Times, Astead W. Herndon wrote a beautiful, in-depth story on how Biden has helped the union push back against Amazon. His piece includes the following interviews with anti-union workers and provides yet another example of what anti-union forces have been saying:

“I know the president weighed in,” said J.C. Thompson, a process assistant at the warehouse. “And I can’t imagine the pressure our leadership is feeling because there’s a few people – a minority – who are disgruntled.”

Carla Johnson, an employee in the warehouse, said she was voting not to unionize.

“I can speak for myself,” she said. “I don’t need someone from the outside coming in and saying this or that.”

For more, head to The New York Times.

In New Haven, Connecticut, bus drivers have gone on a wildcat strike over the lack of vaccines. The New Haven Independent has the story:

[Ralph] Buccitti, business agent for the Amalgamated Transit Union Local 281, said this is not an organized sick-out. Instead, he said, drivers are worn out and fed up with state decisions they feel undervalue their “essential work.”

First came an outbreak that sent 40 employees home two weeks ago at the 2061 State St. CT Transit building. Then came the decision by Gov. Ned Lamont to distribute vaccines by age from here on in, rather than whether people qualify as essential workers.

“You’ve got people worn out. They’re working 40, 50, 60-hour weeks. A lot of them are mentally and physically burned. The message to the governor is: What happened to us?”

Buccitti noted that school systems have been vaccinating their bus drivers. Meanwhile, he said, some CT Transit drivers, unvaccinated, continue to shuttle schoolchildren on special routes.

For more, check out The New Haven Independent.

In Southampton, Long Island, workers at the “iconic” Tate’s Bake Shop are being told that if they unionize, they will be deported.

“They began threatening people based on their immigration status, telling them that if their documents are not in order and they attempted to join the labor union they would get deported,” SEIU Cosmo Lubrano told News12BX.

For more, check out News12BX.

Finally, right after Hurricane Katrina, corporate Democrats working with Republicans in the state legislators in New Orleans adopted a plan that dramatically expanded charter schools. Through this expansion legal steps would have needed to be taken, that is why charter schools need help with this side of evolvement through professionals that practice in this specific area, so every official involved follows the guidelines.

Now, their teachers’ union is struggling to organize those schools. The LensNola.org has the story:

The New Orleans teachers union – which once represented teachers across the school district – was all but destroyed after Hurricane Katrina. The Orleans Parish School Board laid off 7,600 public school employees in the months after the storm as it faced a funding shortage.

Teachers unions have made a small comeback in the city over the last eight years, with Bricolage educators becoming the sixth school to attempt a union drive. But the vast majority of educators in the city are employed without union representation, under year-to-year contracts with individual charter school groups.

For more, go to the Lens Nola.

Keep sending donations so we can cover the Alabama Amazon Union Vote. We appreciate all your support.