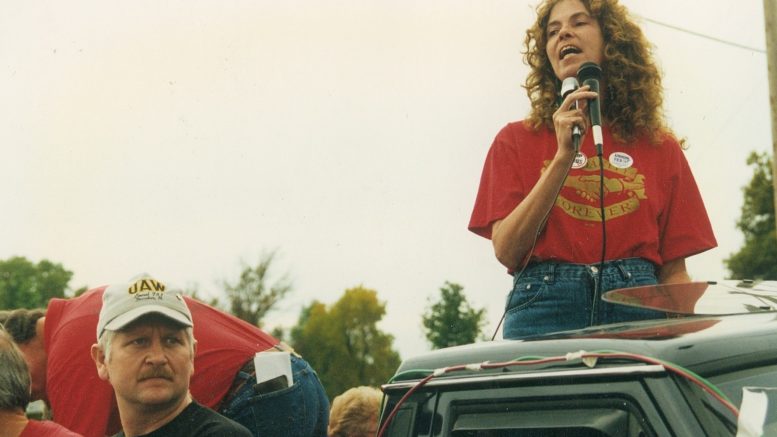 Anne Fenney playing on the back of a pickup truck for striking workers in Decatur, Illinois in 1995. (Dexter Arnold)

Greetings from the Burgh, where Payday Report has learned some very rough news.

The legendary labor folk singer Anne Feeney, who has spent years touring alongside the likes of Pete Seeger in support of striking workers and unions, is in the ICU here in Pittsburgh with COVID.

According to Feeney’s daughter, Amy Berlin, Fenney, 69, tested positive for COVID after being transferred to a skilled nursing facility as she recovered from a major back procedure.

Over the past few days, Feeney has slipped in and out-of-consciousness and states of speech. Her children Amy and Dan Berlin have said that Fenney is fighting COVID the same way she fought “the Boss” with folk music.

“She stared lovingly at me and Dan, and she watched the compilation of videos that friends have sent her. Every time a new person started singing, she would raise her arms or squeeze my hand. She is not speaking, and it’s hard to tell what’s going on in her beautiful, brilliant brain,” wrote her daughter Amy Berlin on Facebook on Monday.

Yesterday, her daughter reports that Feeney regained consciousness and began speaking a little. Her children have reported that so far her favorite song sung by her fans is “Have You Been to Jail for Justice?”

If everyone could say a prayer for Anne Feeney that would be greatly appreciated. As someone who was a neighbor of Fenney as a kid, went to countless UE rallies with her and my dad over the years, and once even shared an RV with her on a cross-country trip, I can’t tell you how much it upsets me that someone like Feeney, who has made so little money giving her life to the labor movement, has COVID. Please mask up and maintain social distancing.

Down in Bessemer, Alabama, 6,000 Amazon workers in the midst of a monumental union election are now facing anti-union literature even in their bathrooms. From the Washington Post:

“Where will your dues go?” reads a flier posted on the door inside a bathroom stall.

“They got right in your face when you’re using the stall,” said Darryl Richardson, a worker at the warehouse who supports the union. Another pro-union worker who spoke on the condition of anonymity for fear of retribution said of Amazon’s toilet reading: “I feel like I’m getting harassed.”

During the 2020 Presidential Campaign, President Joe Biden repeatedly pledged to walk picket lines in support of unions if elected.

Today, Reuters asked White House Press Secretary Jen Psaki how Biden felt about the union vote in Alabama. Psaki’s response was less than the full-throttled support that many in organized labor had hope for as they prepare to do battle against Amazon.

“The President is a strong, longtime believer and supporter of the efforts of labor unions and workers.  I have not spoken with him or our economic team about this particular report, nor had I seen it before I came out here.  If there’s anything more to provide you, we’re happy to follow up with you directly,” Psaki told a press conference today.

Folks, our fundraising to cover the Amazon Union Election in Alabama is going strong. We have raised $1,950 and are making steady progress towards our goal of $3,000.

After years of failed efforts to privatize the bus system in Savannah, Georgia, bus drivers, members of ATU Local 1324 said they were enthused with Baccara Mauldin’s “transparent” attitude when she took over as CEO of the transit authority in June of 2020.

However, Mauldin, only nine months into her contract, and over objections of union members who wanted her to stay, was recently dismissed in a 6-3 vote by the CAT board of directors.

As a result, many drivers went on a “sickout” strike this week to protest her firing. The Savannah Morning News has more:

When Bacarra Mauldin took over as CEO in June 2020, union officials said she was not only transparent, but let their voices be heard.

“She basically gave us a seat at every table, meaning we were included on leadership calls within the company. She was very transparent with us and we had been looking for that for years. A lot of times, we didn’t know what was going on within the company,” said Courtney Wingster, president of ATU Local 1324, which represents nearly 130 CAT employees.

“Sometimes we would even find things out from the customers. The customers would know things before we knew. So that was definitely one of the first things that she did and we appreciated her so much for that.”

For more, check out the Savannah Morning News.

In East Hartford, Conn., more than 40% of snow plow drivers went on a “sickout” strike after more than eight inches of snow hit the area.

The union declined to comment publicly. However, the “sickout” strike came as the union prepares for union contract talks set to begin later this spring that are expected to be contentious.

For more, check out WTNH.

As rural communities cut budgets, many are going without ambulances and relying heavily on volunteer fire departments to fill the void. Now, volunteer paramedics are going on strike to protest their unsafe working conditions. More from the Tribune News Service:

Like the other Worden volunteers, Taylor works a regular day job and spends an additional 20 to 30 hours a week with the fire department.

It’s taxing, he said. While they regularly respond to serious calls involving bad wrecks and big fires, increasingly the department gets called out for issues like a bleeding hangnail or a barked shin.

Taylor once dispatched a crew on a 2 a.m. medical call that turned out to be a stubbed toe. “It’s frustrating,” he said.

Please, donate to our fund to cover the historic union election in Alabama.

Remember, the best way to support us to sign up as a recurring donor today.