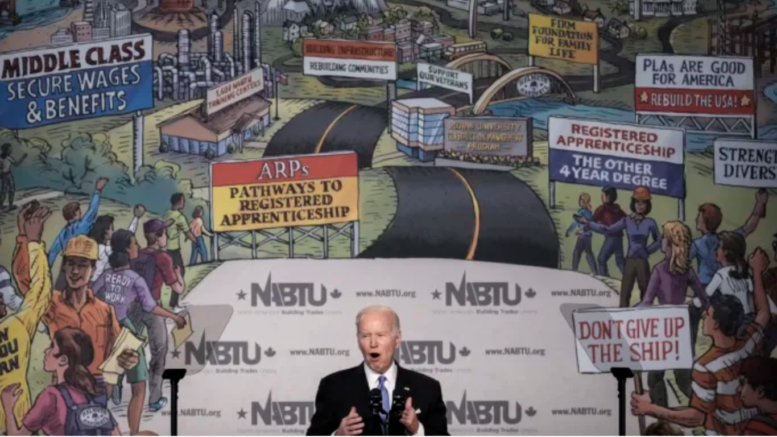 Greetings from the Burgh, where I feel my energy returning after working on covering the Amazon union drive this weekend. (Check out my coverage from over the weekend.)

Thanks to everyone who donated to my long COVID recovery fund so I could have some time to rest after working this weekend.

After the victory by Amazon Labor Union on Staten Island, Amazon hinted publicly they intended to fight the union effort.

However, today in remarks to a national conference of the Building Trades Union in D.C., President Biden warned the company to prepare for unionization.

“…the choice to join a union belongs to workers alone,” Biden proclaimed as the crowd of union activists broke out in cheers. “And by the way, by the way, Amazon here we come. Watch. Watch.”

Following the victory of workers at Amazon in Staten Island, there is likely to be even more organizing.

Donate to Help Us Cover Organizing in the Wake of Amazon Victory.

Please, if you can, sign up as one of ur 678 recurring donors today

Today the nation’s largest independent union, the United Electrical Workers (UE), won big after a union election to represent 3,800 MIT graduate employees passed by a margin of 1785 to 912 students.

In a letter to students, MIT signaled they would immediately recognize the union and begin bargaining with the union in the coming months.

“What started four years ago with a dozen students in an MIT classroom discussing the needs of graduate workers has culminated in this historic victory for student-workers at MIT. Now, we celebrate!” the union wrote on Twitter.

For more on the win, check out MIT’s Twitter page.

Over 265 autoworkers at Vollrath in Sheboygan, Wisconsin, went on strike Monday. The union called for the elimination of the two-tier wage system.

For more, check out the Sheboygan Press.

Donate to help us cover organizing in the wake of the victory at Amazon.

And if you, can please sign up as one of our 678 recurring donors today.

Thanks yinz for all the support.