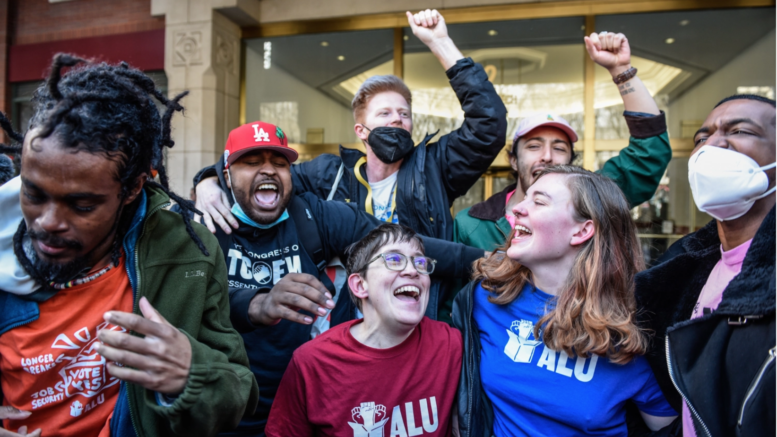 Big news tonite, and then I promise I will take a couple of hours off from coverage.

The independent Amazon Labor Union is demanding that Amazon immediately recognize the union & begin bargaining in early May.

ALU also demands that workers have ALU representation in all disciplinary hearings & discipline be subject to bargaining – their federal right. Labor lawyer Seth Goldstein is representing them.

From Jodie Kantor & Karen Wiese’s masterpiece profile of the union drive in the New York Times:

By Christmas, the organizers scored a major legal win. Amazon agreed to a nationwide settlement, among the largest in the agency’s history, that said workers could stay in the buildings to organize when they were off the clock.

“What you do is you create a community that Amazon never really had for workers,” said Seth Goldstein, a lawyer who represented the organizers free of charge.

One day this February, Mr. Smalls was bringing lunch to the break room when Amazon called the police, saying he had trespassed. He and two current employees were arrested. The response may have backfired: The union’s videos of the episode on TikTok have been viewed hundreds of thousands of times.

For more, check out the full masterpiece in the New York Times.

Strikes are on the table at Amazon. Workers there had previously wildcat strikes at the beginning of the pandemic.

The fight for a 1st contract will likely involve the threat of strikes at other warehouses & abroad.

Check out my profile here for more on how the pandemic & BLM redefined strikes.

We will keep updating you as we learn more about this exciting moment in the labor movement.

Donate to Help Us Cover Post-Amazon Victory Organizing. If you can, please consider signing up as one of our 677 recurring donors today.

Thanks for all of your support to make it possible to cover this crucial fight at Amazon.