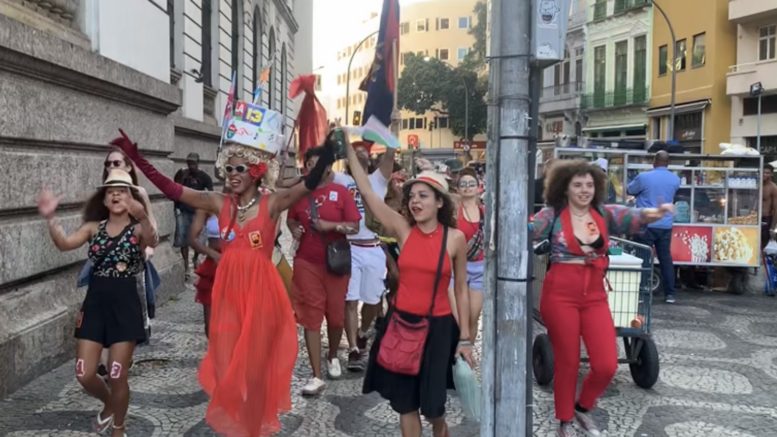 RIO DE JANEIRO, BRASIL – It’s Lula’s 77th birthday, and the crowd for his street party in downtown Rio is decked out in red, the color of Lula’s Workers’ Party.

A woman wearing a giant birthday cake hat with Lula’s presidential campaign logo is leading a crowd of musicians and activists dancing down the Rua de Evaristo da Veiga street as flags of various social movements fly at the front of their procession. They flash the “L for Lula” to the beat of the drummer in the back gets the party going.

When they turn the corner into Cinelandia, Rio’s main downtown plaza, a crowd of several hundred people on the steps of Rio’s City Hall begin to cheer as the procession enters.

People dance on stilts, others are dressed in the traditional clown costumes of Carnivals. Horns blare and drums can be heard from almost every direction. As activists drink beers in the street, over a dozen street vendors have set up shop to sell bright-colored clothes printed with Lula’s face and slogans like “Vaccine, Steak, Beer & the Workers Party.”

For the past four years, Brazilians have suffered greatly under the fascist administration of Jair Bolsonaro. Now, with the election just four days away, many say the darkness of living under Bolsonaro will soon be over.

Environmental activist Mac Cord approaches me and hands me a tropical leaf with the words painted on it that “Lula will bring back happiness” on it.

However, on the edges of the dance party in Rio’s central plaza Cindelania, there are signs that Lula is still in for an uphill fight in Rio de Janeiro, where Jair Bolsonaro, aided heavily by paramilitary forces that control favelas with more than 1.7 million, pulled off a victory 51% to 40%.

At the edge of the plaza, Ida Marcas, a professor of filmmaking at the Federal University of Fluminense, hands out pro-Lula flyers to passersby on the way to the nearby metro stop. As she hands out the fliers, a young working-class guy rejects her flier and shouts back at her, “Lula will rob the state!”

“It’s really difficult to work to change people’s minds. It’s very, very intense,” says Ida. “People believe the fake news. The cleaning woman in my building said she is going to vote for Bolsonaro. The level of political education in Brazil is very low, very low.”

She adds that Brazil’s military dictatorship only fell in 1988.

“Democracy is still very young in Brazil,” she says, noting that the culture of violence and poverty have led many working-class people in Rio’s poorest parts to be attracted to the false hopes of fascism. Ultimately, she blames the media and social networks on WhatsApp and Facebook for electing Bolsonaro.

On the other side of the plaza, a Black activist wearing a hat with a Cuban flag on the side argues about politics with a popcorn vendor standing next to his cart with an assortment of sweet, cheese, and bacon popcorn.

“Lula will be great for workers. We will have someone who will fight for us,” says the activist as he eats a piece of bacon out of the popcorn. “He raised the minimum wage 70% when he was president.”

“But I am a businessman, and Bolsonaro has been great for me. He introduced Pix,” says the popcorn vendor speaking of the online payment system introduced by the Bolsonaro administration that allows small business owners to receive online payments through an app without being taxed.

After the party moves down the street into the main square of the historic party district of Lapa, I meet beer vendor Jair Silva, who has a very different perspective.

In front of his mobile cart, he has a big banner that reads “I am Jair, but I am not a Bolsonaro supporter” with the slogan “#EleNao (#Him, No), a popular hashtag used against Bolsonaro.

“Bolsonaro has been terrible. He’s cut education funding. How are people like my daughter supposed to have a future if they don’t have education,” says Jair pointing to his elementary school-age daughter standing nearby. “He needs to go.”

As we talk, a group of activists suddenly appear on top of the street car track on the aqueduct that cuts across the plaza. As the crowd starts to cheer, a trio of activists drops a three-story banner that reads: “Bolsonaro is Hunger, Plague, War and Death – Read Apocalypse 6:8.”

People break out in dance as samba bands play in multiple corners of the square and a dozen red-clad dancers on stilts get the crowd pumped up by singing, “Lulaaa, Lulaaa, Lulaaa, Lula, Lula!” In some corners, people kiss and make out as whiffs of marijuana are thick in the air, but the military police holding submachine guns stationed on the side of the road nearby, just let the party go on.

As the party rages and hundreds dance in a big circle, I suddenly run into Eusébio Pinto Neto, president of the Rio gas station workers union SINPOSTPETRO-RJ, who gives me a big hug.

“This is a historic moment for Brazil,” says Neto. “Brazil has an important role to play in the world. We have to save the Amazon. We could be leaders again.”

“I am glad that I lost to him because he was such a tough union leader,” says Lemos as he recounts the multiple times Lula was jailed for leading a series of strikes that ultimately helped topple the military dictatorship.

Lemos is confident that if Lula gets elected, it will inspire a popular movement that will take power away from the elites and empower grassroots social movements in the country.

“It will create a democratic revolution. People will be energized to participate in politics,” says Lemos. “And Lula will need that energy because he will have to fight a Congress that will still be controlled by many Bolsonaristas.”

As the party winds down, I spot Clara Davinich draped in the Brazilian flag and holding a yellow flower while handing out stickers that read “Lula, Love will beat hate.”

Bolsonaro has told his supporters to use the Brazilian flag to show their support for his fascist politics, but Davinich is determined to reclaim the flag.

“The flag is the Brazilian people’s flag. Bolsonaro robbed our flag and made our people scared,” says Davinich. “I don’t have fear, this flag is our flag. I’m Brazilian. I love my country and my people, and I believe that Lula is the only hope that we have.”

At 83, Davinich has kept active by raising money to distribute literature. She says she has talked to as many people as possible and has been fundraising by making stickers to hand out to people to persuade skeptical voters to back Lula.

A determined grandmother, she says she has had a lot of success in switching people away from Bolsonaro by educating them about Bolsonaro’s track record and teaching them about his lies. She says she is confident that Lula will win. When I ask her why she points to the words on the homemade sticker on her chest.

“I always say that love will conquer hate,” she remarks as a party of a hundred Lula supporters rages around her in the streets of Rio de Janeiro.

Donate to Help Us Cover the Brazilian Presidential Election This Sunday

Be the first to comment on "At Lula’s 77th Birthday Party, Love & Division on Display"