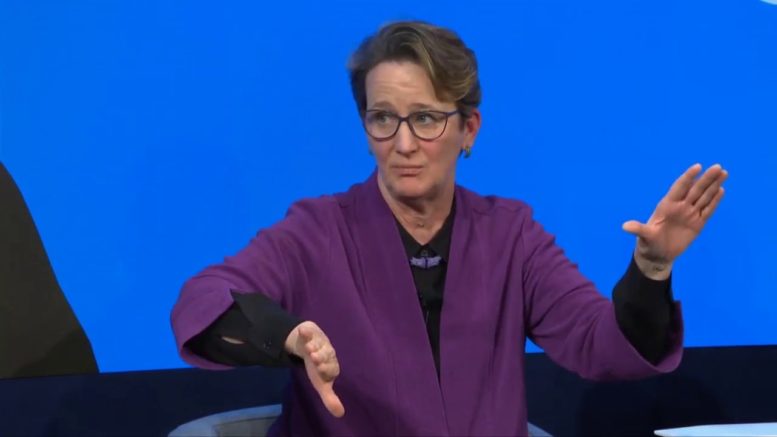 SEIU President Mary Kay Henry, pictured here at Davos in 2018, is facing the threat of a strike amid a growing sexual misconduct strike. (Youtube)

Earlier today, OPIEU Local 2, which represents SEIU’s unionized headquarters staff, announced that 92% of the staff had voted to a strike against the union’s top leadership.

The workers say that they are voting to authorize the strike after a series of abuse by top management.

On Monday, Payday Report revealed that SEIU subpoenaed Google to find out the identity of a whistleblowing blogger. Last week, an SEIU staff, Njoke Woods, was fired after going on the record with Payday Report about sexual misconduct and retaliation within SEIU.

Many SEIU union staff activists say that the sexual misconduct scandal that is being uncovered within the union is emblematic of the general level of disrespect that SEIU top managers show for their staff.

“As the most progressive labor union in the country, SEIU has a special responsibility to lead by example and work with its union staff to fight back against the right-wing attacks on labor in this country,” said David Hoskins, chief shop steward. “To do this, we must work together to create more good union jobs—not eliminate them. Unfortunately, what SEIU tells the public and its members about union values contrasts sharply to its behavior toward its union workers. At our office, SEIU bosses have engaged in a prolonged union-busting campaign, even while bargaining a collective agreement with its union staff.”

Over the past five years, the union’s two staff unions, OPIEU Local 2 and the Union of Union Representative say that SEIU’s union-busting has seen the unions’ combined strength cut in half from 283 members five years ago to 149 today.

To dilute the strength of the union, SEIU has shifted more of its work to independent contractors and classified 70% of its staffers as managers in order to exempt them from being part of the bargaining unit. According to Department of Labor filing, SEIU spent $21.6 million in 2017 outsourcing work to non-union consultants.

Now, the union is trying to force union staffers employed by SEIU’s pension fund to negotiate contracts separate from other workers at the union; diluting the strength of the staff union even further.

“SEIU spent the past 10 years punishing its staff unions for possible bad decisions by a conservative Supreme Court,” said Christi Fanelli, an OPIEU Local 2 member working at SEIU Headquarters. “We are now reaching a crisis point where all the money is being spent on expensive people offering opinions, and very few people are left to do the work. Local 2 has had enough of this cycle of irresponsibility. Building a sustainable organization means developing institutional knowledge and investing in the people who are committed to the labor movement.”

SEIU disputed the idea that they did not respect their staff and pledged to work with the union.

“Everyone at SEIU values the work performed by our staff to improve the lives of SEIU members. SEIU has been strongly committed to reaching a negotiated settlement that allows our union to meet the daunting challenges that SEIU members are up against and provides a workplace that is aligned with our values,” said SEIU spokesperson Sara Lonardo.

Be the first to comment on "Amid Growing Sexual Misconduct Scandal, SEIU Staff Vote to Strike"