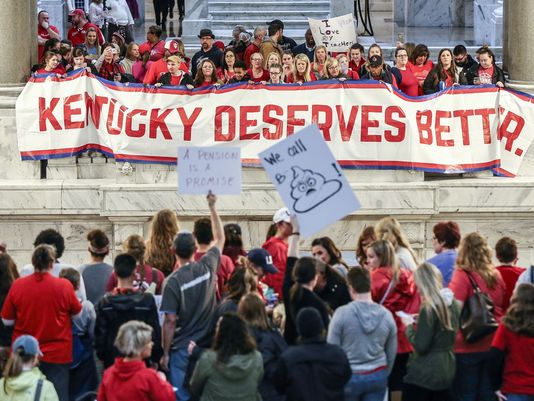 On Tuesday, schools in the Louisville-area Jefferson County Public School district will be closed once again as teachers will once again engage in a “sickout” strike.

In a late night message sent to parents from the Jefferson County Public Schools, the school district announced that “Due to approximately a third of teachers being absent and the inability to safely cover a large number of classes with substitute teachers, all JCPS schools will be closed Tuesday, March 12, 2019”.

The “sickout” strike marks the 4th time in two weeks that teachers in Kentucky will call out in sick in order to protest anti-teacher union bills being pushed by Republican Kentucky Governor Matt Bevin.

The strike comes in defiance of a deal struck between the leaders of areas’ teachers’ union and the Jefferson County School District to keep schools open on Tuesday so that students could take the ACT.

With strong rank-and-file support for the teachers’ sickouts, many expect that the “sickout” strikes will continue throughout the month while the state legislature stays in session.

Area parents have also rallied behind the teachers, providing encouragement for them to keep schools shut down.

“I called my daughter’s school and told them she wouldn’t be attending tomorrow in support of the teachers, and the office told me that she will need a [doctors] note. I informed them that she would not be bringing in one but I will excuse her absence with a parent note” wrote parent Kris Mattingly in the facebook group #JCPSFamiliesSickout

“They stated that she should be at school and that it will reflect poorly on her. She is a straight A+ student who hates missing school but she is the one who came to me and asked if she could stay home to support her teachers” wrote Mattingly. “She feels strongly about the subject matter because she has always wanted to be a teacher so who am I tell her no”.