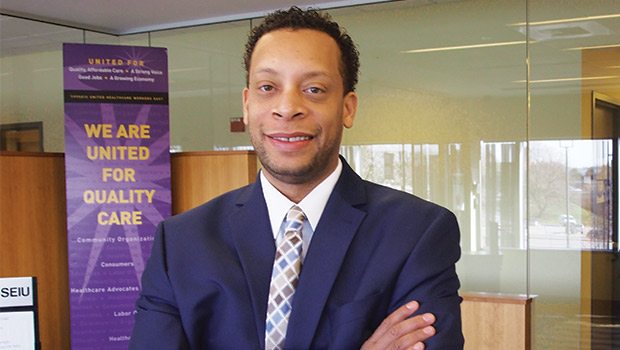 Tyrek Lee was honored at Harvard last month despite allegations of sexual misconduct revealed against him in the Boston Globe. (Bay State Banner)

Despite the serious nature of the allegations against him and reporting by the Boston Globe detailing what occurred, Lee was able to keep his job and suffering only a minor demotion and some disciplinary action.

Now, Payday Report has learned that despite the sexual misconduct allegations against him, Lee was able to gain entrance to the prestigious Harvard Trade Union Program.

The program is run by the Labor and Worklife Program (LWP) at Harvard Law School. The Harvard Trade Union Program is one of the most prestigious programs offered to US labor leaders, often helping emerging labor leaders make connections with labor leaders and gain promotions within the labor movement.

Sharon Block, who served as a member of the National Labor Relations Board under President Obama, runs the program. Later, Block served as Principal Deputy Assistant Secretary for Policy at the U.S. Department of Labor and Senior Counselor to Secretary of Labor Tom Perez.

“As someone who has done class presentations at the Harvard Trade Union Program for more than three decades and gotten to know some of its students personally, I know how much it means to up-and-coming union leaders to attend the program and become part of its alumni network,” said Steve Early,  a longtime Boston area union official and the author of “The Civil Wars in U.S. Labor: Birth of a New Workers’ Movement or Death Throes of the Old?

“In most unions, going to Harvard is an honor and a privilege only accorded to those who have earned it through their superior performance on the job, as an elected local officer or appointed staff person,” said Early.

The program costs $16,000 to complete and the admission costs are often paid for by the unions sending union leaders to complete it. It’s unclear who paid for Lee to attend as he did not return a request for comment.

Not only was Lee admitted to the program, but he was chosen as a class speaker at a graduation ceremony for the program in February of 2019.  The program was attended by many of the top luminaries in the labor movement and is where Sharon Block gave opening remarks and personally spoke and handed out certificates to each of the participants.

In light of the serious sexual misconduct allegations, it’s unclear why Lee was admitted to the Harvard Trade Union Program and featured prominently as a class program speaker.  A little more than a year after, the Boston Globe ran an expose on allegations of sexual misconduct against him as the top-ranking official at SEIU 1199 Massachusettes.

“Rewarding someone who has been disciplined and demoted for workplace misconduct, involving female members, sends a very bad message to other people in SEIU”, said Steve Early.  “You would think that a slot at Harvard would be reserved for an SEIU activist who has challenged workplace bullying and sexual harassment and tried to make the union a better place for members and staff alike. Instead, a career advancement opportunity costing somebody $16,000 has been given to a person that was part of the problem rather than the solution.”

It’s also unclear if SEIU 1199’s role as a financial sponsor of the Harvard Trade Union Program played a role in Lee’s acceptance to the program.

Sharon Block did not return for a request for comment sent to both her email and via Twitter direct message.

However, the rehabilitation of Lee’s career through his prominent role in the Harvard Trade Program raises questions about how many SEIU top officials have been able to avoid consequences for their behavior by retaliating against and smearing their accusers.

In February of 2018, shortly after the Boston Globe published an article outlining allegations against Lee, SEIU1199 Massachusetts staffer Teia Searcy posted on Facebook that “the whole #metoo shit GOT the WHORES coming out” and added an emoji featuring a hand with a middle finger raised and the hashtag #karmaisabitch.

As a top official in the multi-state local, Turner is one of several officials whose input will play a key role in the decision over whether to retain Lee after allegations of sexual misconduct. By liking a post labeling #metoo activist as “whores,” Turner has sent a chilling message that could prevent future #metoo activists within SEIU from coming forward.

In response to Searcy’s initial post accusing #metoo activists of being “whores,” Turner’s sister, who uses the Facebook name “Sugsweetthang Turner,” posted in reply, “Saying me too now, but was screaming me first then while they were on their knees!”

Despite the smear campaign against Lee’s accusers, no disciplinary action was ever handed down against those who engaged in it.

The smear campaign and rehabilitation of Lee’s images are part of a troubling series of moves by SEIU to retaliate and smear sexual misconduct accusers within the union’s ranks as SEIU faces a high-profile sexual misconduct lawsuit.

On Monday, Payday Report revealed that SEIU subpoenaed Google to find out the identity of a whistleblowing blogger. Last week, an SEIU staff member, Njoki Woods, was fired after going on the record with Payday Report about sexual misconduct and retaliation within SEIU.

On Tuesday, SEIU headquarters staff announced 92 percent of headquarters staffers that are members of OPIEU Local 2 had voted to authorize a strike. Among the many issues that upset them was the culture of sexual misconduct and retaliation, which many say is emblematic of the disrespect that SEIU top management shows for its staffers.